For Alabama, along with the rest of the country, the year 2020 has clearly played out as a “best of times, worst of times” scenario.

In Alabama, the year started off with a bang. The state’s economy was prospering like never before, with a record number of Alabamians holding down jobs and the lowest unemployment rates ever recorded. From one end of Alabama to the other, factories were boosting production while businesses of all kinds were performing strongly.

In early spring, the coronavirus crisis began escalating. The pandemic struck Alabama’s economy with instant and unimagined challenges that linger to this day. And while the path forward is dotted with obstacles, Alabama has moved squarely on to the road to recovery.

Alabama’s economic resurgence is powered in part by the state’s automotive and aerospace industries, which quickly adopted new safety measures such as on-site temperature checks, mandatory face masks and enforced physical distancing measures. The resilience shown by companies in these sectors allowed them to keep their workforces engaged and productive.

Equally important, major companies within the auto and aerospace industries remain committed to their Alabama growth plans, reinforcing sustainable, long-term strategies that will bring new capital investment and good-paying jobs to the state. 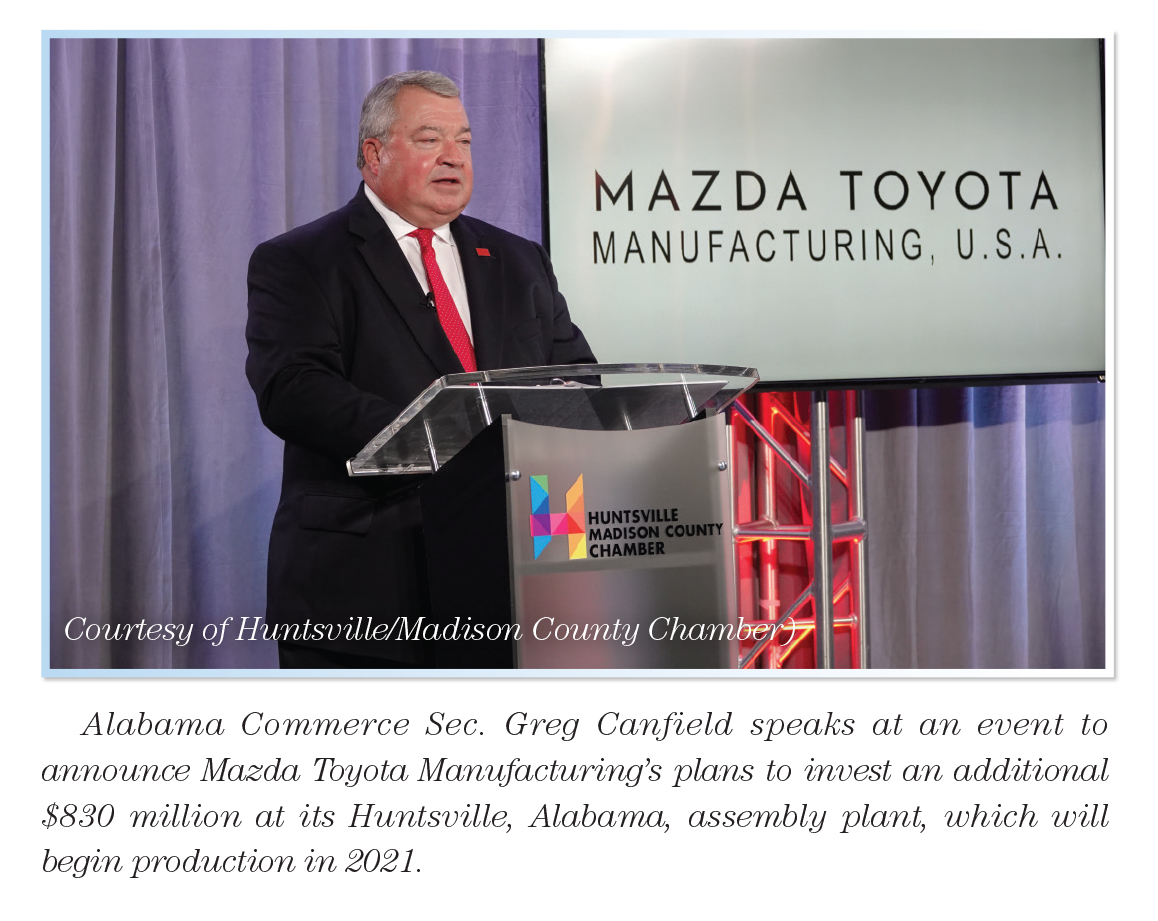 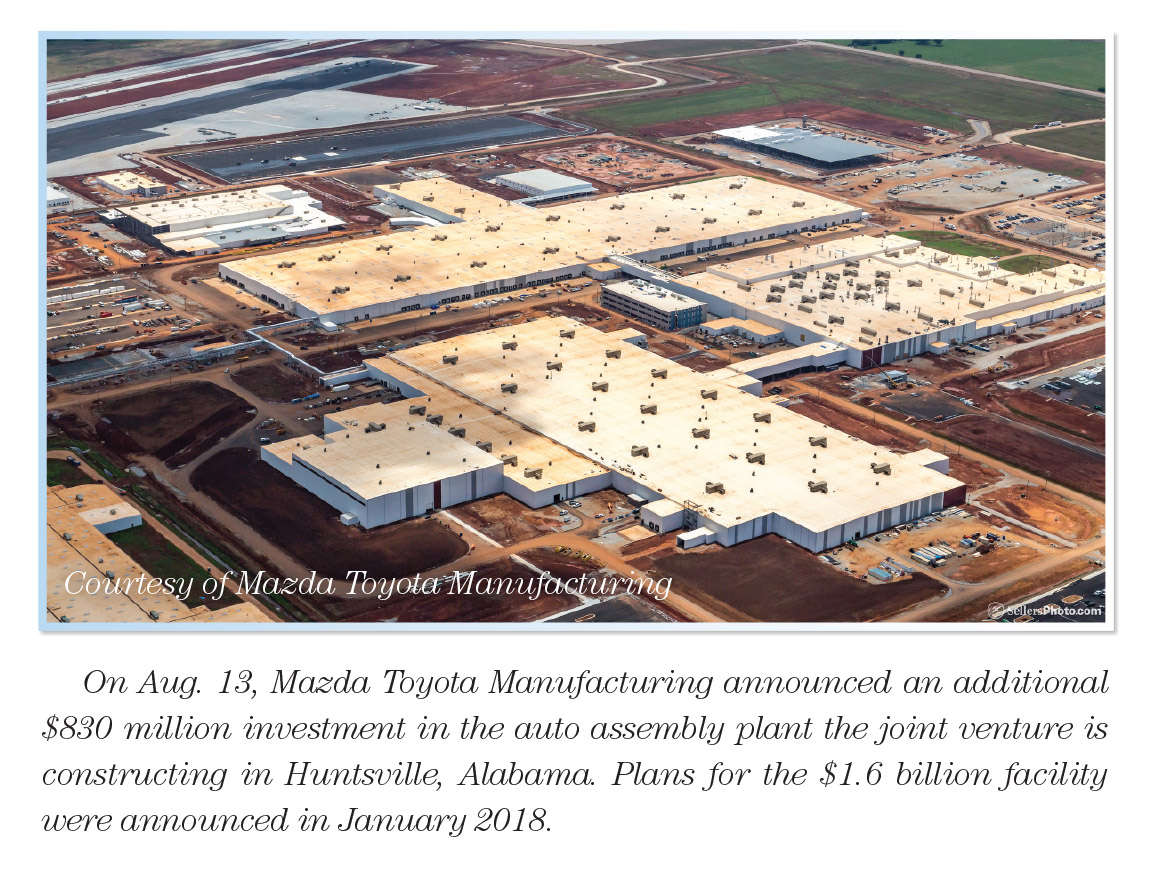 One example is Mazda Toyota Manufacturing, the joint venture assembly operation from automakers Mazda Motor Corp. and Toyota Motor Corp. that will launch production next year in Huntsville, providing an enormous economic boost to the North Alabama region.

The Mazda Toyota project was announced in January 2018, with an initial investment pegged at $1.6 billion. With construction still ongoing, Mazda Toyota announced in August an additional investment totaling $830 million to incorporate new manufacturing technology into the facility’s production lines and to enhance training activities.

The new investment illustrates how Alabama’s entire automotive manufacturing sector—anchored by assembly plants operated by Mercedes-Benz, Honda and Hyundai, as well as a large engine plant operated by Toyota—continues to race ahead with new growth plans.

With a helping hand from AIDT, the state’s primary workforce development agency, Alabama’s auto sector is expected to add around 7,000 jobs in the coming months and years as previously announced growth projects move toward completion across the state.

Mazda Toyota Manufacturing will account for the lion’s share of the new hiring activity. So far in 2020, the Mazda Toyota workforce has grown to about 600 team members, but there’s more hiring to come. The manufacturing facility will employ up to 4,000 people once full production is reached.

The Mazda Toyota plant is also acting as a mothership for suppliers. Already, seven suppliers have pinpointed sites in Alabama for production locations that will create almost 1,800 new auto-sector jobs. Combined, the investment in these operations will exceed $500 million. Moreover, additional announcements are expected.

Foreign Investment
Most of the new investment in Alabama’s auto sector is coming from foreign companies.

To put it simply, foreign direct investment continues to represent lifeblood for Alabama’s economy, despite the COVID pandemic and the global trade turbulence that predated it.

Companies from around the globe continue to find a welcoming home in Alabama. Through August, Alabama-bound FDI during 2020 has topped $1.5 billion, creating hundreds of job commitments in industries ranging from aviation and automotive to distribution and forest products.

In reality, FDI has been a major driver of economic growth in Alabama for years. Since the beginning of 2013, FDI projects in Alabama have accounted for more than $17 billion in new capital investment, generating around 30,000 job commitments. FDI typically accounts for 30 to 50 percent of new and expanding industry activity in the state each year.

Over the years, these investments have proved to be critical because they accelerated growth in Alabama’s key economic sectors, particularly automotive, aerospace and chemicals.

Mercedes’ success in Alabama served to build a foundation for future foreign investment in the state. The German automaker announced plans for its Alabama assembly plant in 1993, and that event instantly paved the way for international companies looking for a new U.S. industrial home. 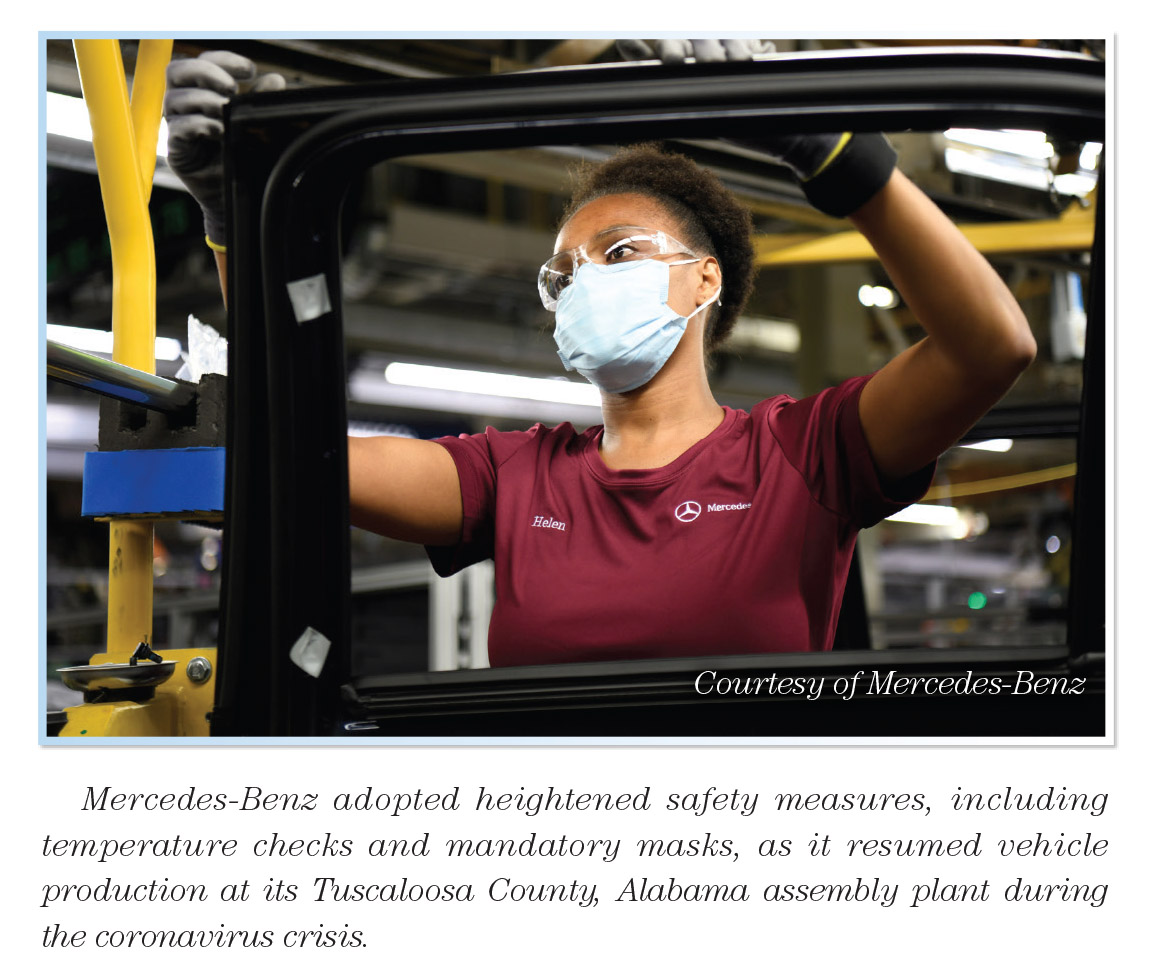 Today, after repeated expansions, Mercedes’ total investment in Alabama approaches $6 billion, and its Alabama-made vehicles are sold around the world. The automaker is preparing for the future by introducing electric vehicles to its Alabama production lineup, and it’s constructing a battery assembly plant in the state to advance those plans.

Aerospace Growth
Meanwhile, Alabama’s broad-based aerospace industry continues to grow in exciting ways. In recent years, aerospace and aviation companies have invested $3 billion in the state, creating thousands of jobs in projects that focus on activities such as rocket engine manufacturing, aircraft assembly and hypersonic technologies.

The new projects are building on solid aerospace foundations that include Redstone Arsenal, the center of the U.S. Army’s missile and rocket programs for more than 60 years, and NASA’s Marshall Space Flight Center, which has played a prominent role in America’s space program for decades.

The Alabama facility has begun manufacturing ULA’s next-generation Vulcan Centaur rocket, which will be powered by engines produced by Blue Origin at the private spaceflight company’s new factory in nearby Huntsville.

On top of this, there are a number of positive developments taking shape in Alabama’s aerospace sector.

For one thing, Alabama has moved to center stage in the development of hypersonic technology, which allows missiles to fly at unbelievable speeds. 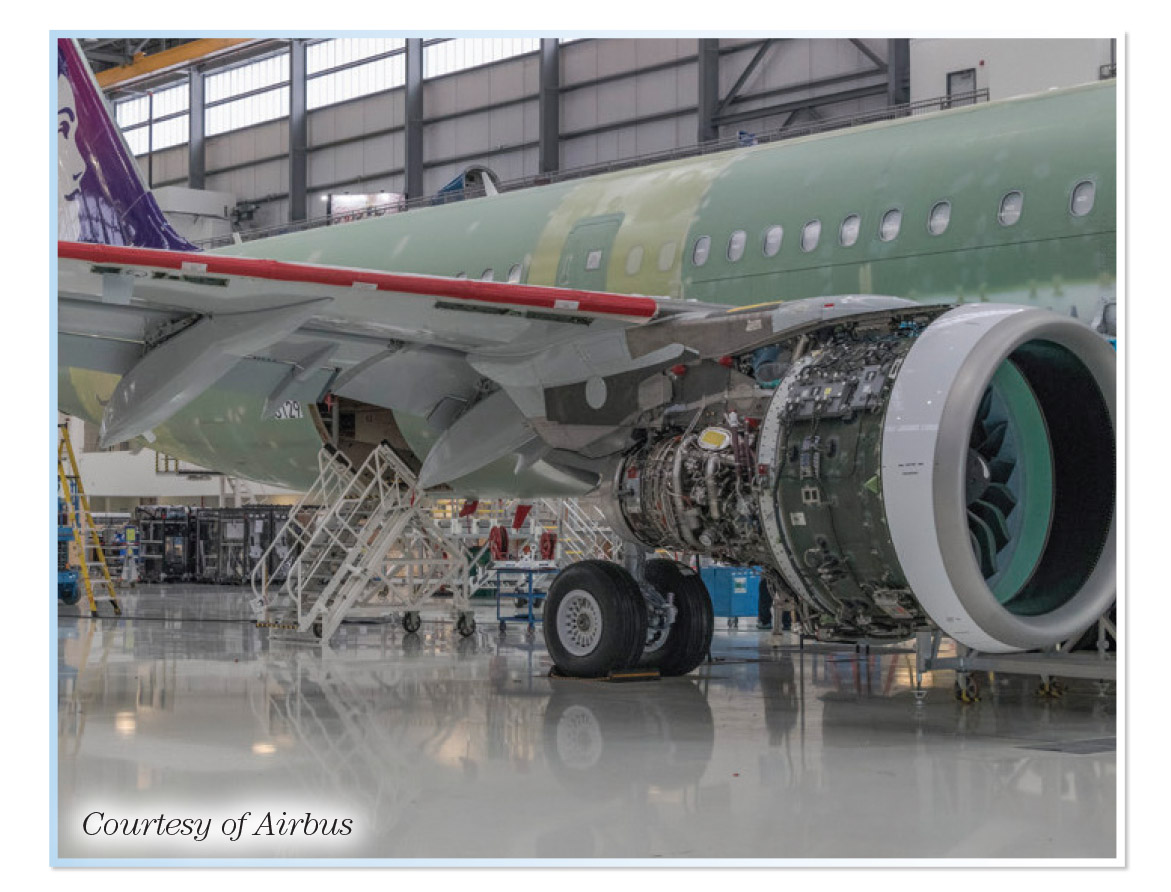 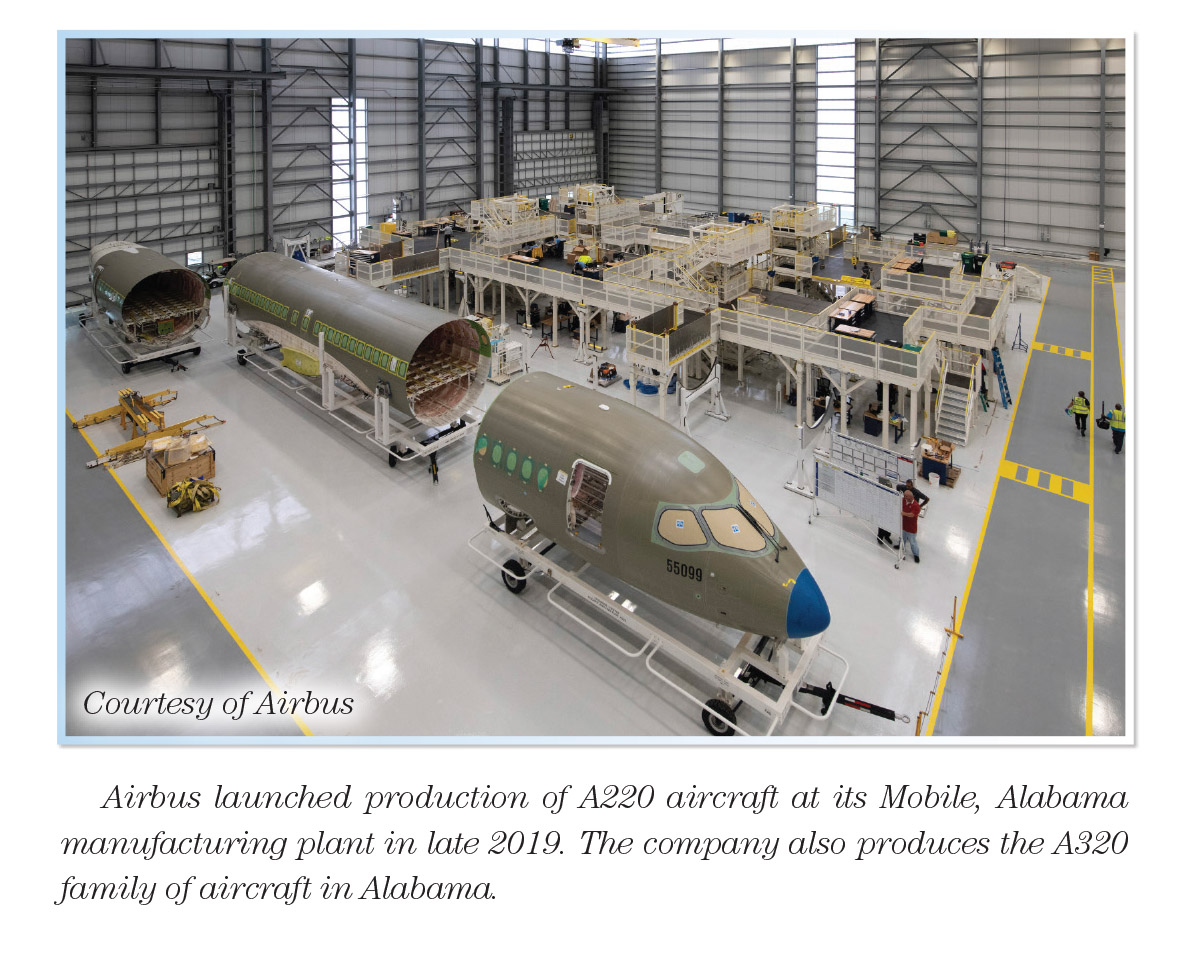 Lockheed Martin has selected North Alabama as the flagship location for its work on these technologies. As part of this project, the company is establishing a manufacturing center in Courtland and an engineering hub in Huntsville, creating more than 270 jobs.

Dynetics, a firm founded in Huntsville, is making contributions to both the hypersonic and NASA’s moon lander projects through the development of technology and hardware in Alabama.

And despite uncertain times in the aviation industry, Airbus is moving forward to expand aircraft production in Mobile with a new assembly line for its A220 aircraft. Airbus’ Alabama manufacturing facility remains poised to become the long-term nucleus of an expanding Gulf Coast aerospace corridor.

Promising Sectors
When it comes to economic development, however, Alabama’s growth prospects range far beyond automotive and aerospace.
The state is positioned for growth in several traditional economic sectors, including forest products and chemicals. It’s also primed for growth in one area that seems less traditional for Alabama – bioscience.

That’s because Alabama possesses a broad-based presence in the life sciences sector, including research institutions that concentrate on drug discovery and DNA-focused medicine, medical device manufacturers, innovative biotech startups and much more.

With these robust resources in place, bioscience is a natural growth area for the state, particularly as part of the pandemic response. One early example: Auburn-based SiO2 Materials Science launched a $163 million, 220-job expansion after receiving a major federal government contract to supply vials for COVID-19 vaccines.

Having these promising fundamentals in place would mean nothing, however, if we neglected one critical ingredient – delivering a quality workforce. In these uncertain times, it’s clear that workforce development is now more important than ever.

Recognizing this, Alabama agencies are closely coordinating efforts to make sure that displaced workers are identified and put on the path back to a job. These efforts primarily focus on connecting these workers to companies and apprenticeship programs or up-skill training. It’s a comprehensive effort that aims to help as many people as possible while greasing the wheels of Alabama’s economy.

Although we are certainly facing a different set of issues than prior to the coronavirus outbreak, our workforce programs continue to assist Alabama companies, large and small. Alabama has a long history in workforce development, so this transition has been seamless.

We’re taking all these steps to position Alabama for success in a post-COVID world.

Greg Canfield has served as the state’s leading economic developer in his role as Secretary of the Alabama Department of Commerce since 2011. During his tenure, Alabama has recorded economic development projects totaling over $37 billion in capital investment and involving the creation of 125,000 new jobs. 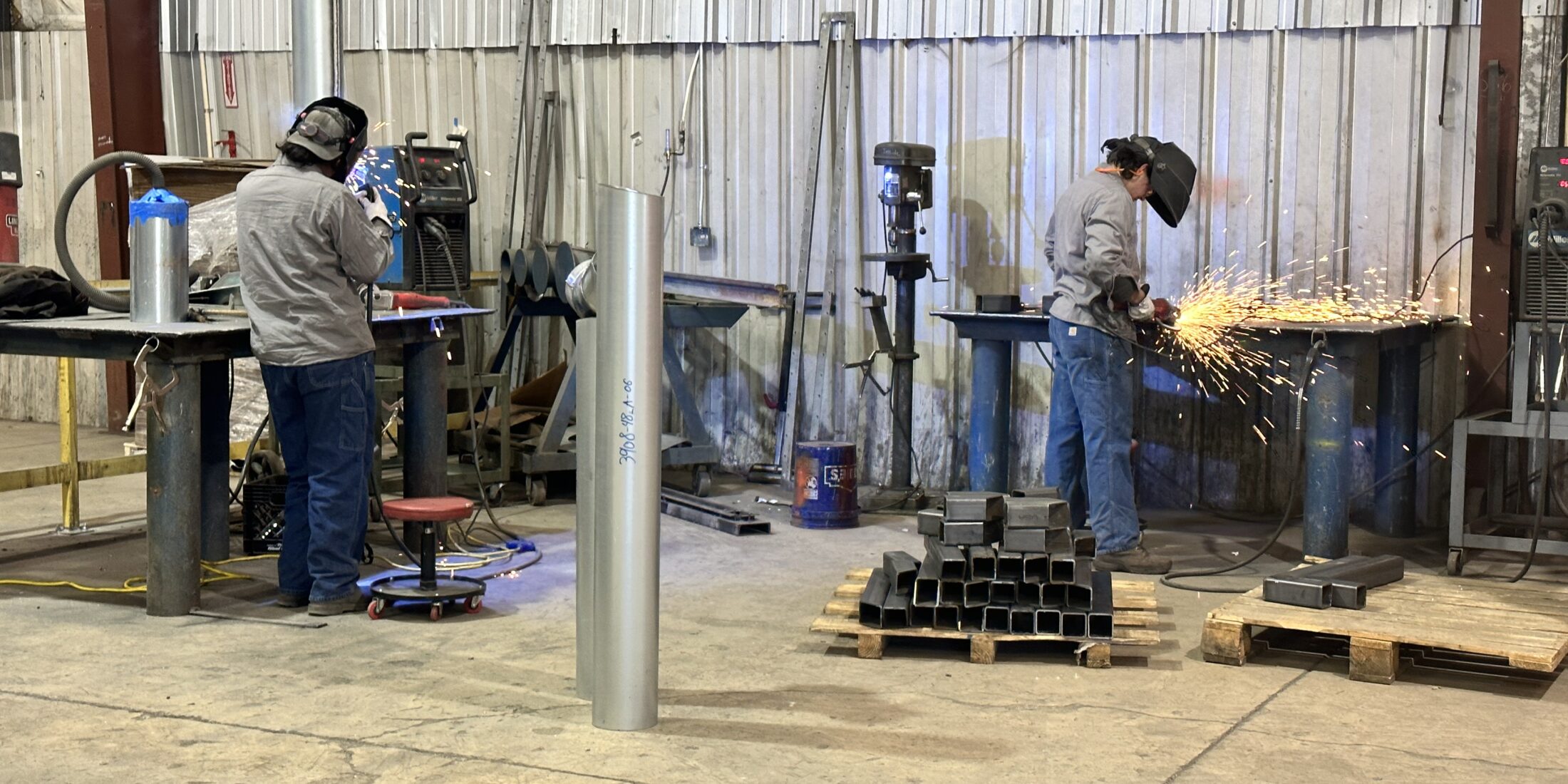