Diehard fans of University of Texas sports have committed the words of “The Eyes of Texas” school spirit song to memory, with the first seven words — “the eyes of Texas are upon you” — being a familiar refrain on their own. In a modern twist on the 119-year-old tune, the eyes of the world are upon Texas when it comes to economic development.

Last year turned out to be a banner year for economic development in Texas. For example, Texas notched its 20th consecutive year as the top exporter among all of the states. On top of that:

For Robert Allen, president and CEO of the Texas Economic Development Corp., more eyes on Texas translates into more chances to capitalize on economic development opportunities and to “show decision makers the full package here in Texas.”

Consultants who specialize in economic development projects, corporate relocations and corporate expansions are intimately familiar with the “full package” that Texas offers.

Matt Patton, executive vice president of AngelouEconomics, an Austin-based consulting firm specializing in economic development and site selection, rattled off some of the items in that package:

“Texas shines as a beacon of hope, prosperity and freedom—an economic and innovation powerhouse offering unmatched opportunities for families and businesses to grow and succeed,” Governor Greg Abbott said in February 2022.

The semiconductor, automotive, food-processing and corporate services sector are among those fueling economic growth in Texas, where preliminary, current-dollar GDP surpassed $2 trillion in the third quarter of 2021.

The Rise of the Semiconductor Sector

One of the sectors lifting Texas’ status as an economic and innovation powerhouse is the semiconductor industry.

Two massive semiconductor projects in Texas were announced last year: a complex of Texas Instruments wafer fabrication facilities to be built in Sherman at a cost of nearly $30 billion, and a $17 billion chip manufacturing plant that Samsung plans to build in Taylor.

If Dallas-based Texas Instruments opens all four facilities that are potentially in the works, the company eventually could employ as many as 3,000 people in Sherman. The first two facilities are expected to start production in 2025.

“In addition to bringing billions of dollars in capital investment and thousands of new jobs to North Texas, this historic investment will keep Texas a national leader in semiconductor manufacturing while also strengthening the domestic semiconductor supply chain,” Abbott said.

A week after the Texas Instrument announcement, South Korea-based Samsung selected Taylor as the site of its second U.S. chip manufacturing plant. It represents the largest foreign direct investment ever in Texas. Production at the new facility is set to begin in the second half of 2024. Samsung says the plant will employ more than 2,000 people. 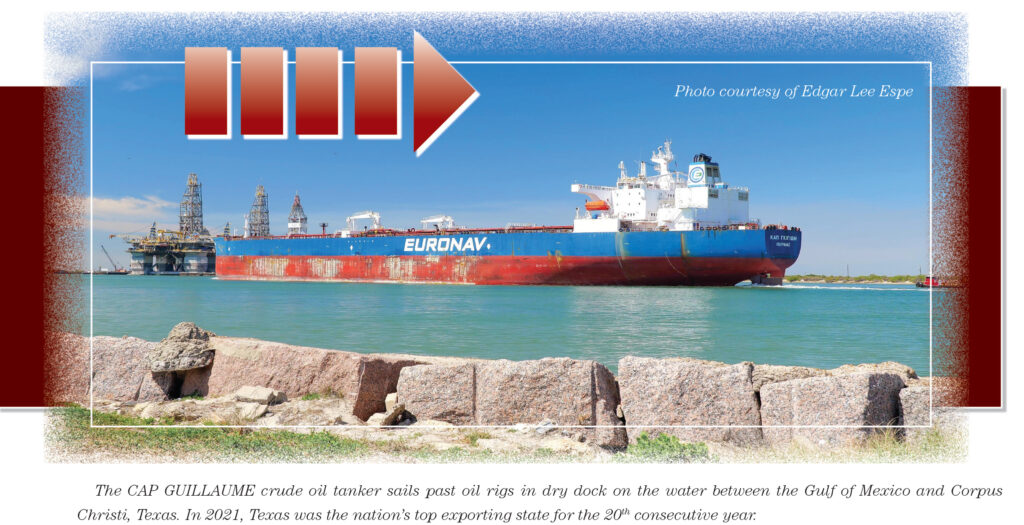 “Samsung’s decision to expand first in Austin and now in Taylor, Texas, is the prime example of a business that has found success in Texas and is now doubling down,” Allen said when the Samsung expansion was announced.

Patton said geography plays a big part in companies like Samsung and Texas Instruments opening large plants in Texas. Aside from undeveloped land being plentiful, Patton said Texas benefits from having few mountains or other challenging landscapes that impede growth. In addition, he said, Texas’ relatively mild climate offers a respite from frequent snowstorms in other sections of the country.

“Really, the sky is the limit for potential growth in Texas,” Patton said.

Texas economic development officials credit U.S. Senator John Cornyn of Texas with helping spur expansion of the semiconductor industry in the Lone Star State and elsewhere in the U.S. Co-authored by Cornyn, the CHIPS for America Act is aimed at ramping up semiconductor manufacturing in the U.S.

“There’s probably no greater vulnerability in the United States from a national security and economic perspective than our dependency on supply chains of semiconductors that are made outside of the country, primarily Asia, and then shipped here to the United States,” Cornyn said a day after Texas Instruments’ Sherman project was announced.

The engine that is the automotive sector is revving up in Texas.

Last December, electric vehicle manufacturer Tesla added to its Texas footprint by relocating its headquarters from the San Francisco Bay Area to its manufacturing plant near Austin. That same month, Tesla began vehicle production at its Texas factory. Allen said the relocation of Tesla’s headquarters bolsters the state’s reputation as a business-friendly environment.

South of Austin, DeLorean—the automotive brand that gained fame in the movie “Back to the Future”—revealed plans in February 2022 to resurrect itself as a maker of electric vehicles. Pending approval of financial incentives, DeLorean’s headquarters will be located at the Port San Antonio development and employ about 450 people.

San Antonio already is home to a Toyota plant employing 3,200 Toyota workers and 4,000 on-site workers from Toyota suppliers. The factory makes Toyota Tundra and Toyota Tacoma pickup trucks. And in February 2021, Navistar unveiled plans for a second facility that will complement its 900,000-square-foot plant under construction in San Antonio, where electric-powered trucks and other vehicles will be made.

In 2020, Texas exported more than $1.3 billion worth of cars, putting it at No. 11 among the states based on the value of car exports.

John Boyd, principal of The Boyd Co., a site selection consulting firm based in Boca Raton, Florida, said Texas is poised to become a leader in the production of electric vehicles (EVs). He envisions Texas attracting a big chunk of federal infrastructure dollars tied to EVs.

Just one example of the EV industry’s trajectory in Texas is a 2021 announcement from Wallbox, a Spanish maker of EV charging equipment, that its first U.S. assembly plant will be a 130,000-square-foot factory in the Dallas-Fort Worth suburb of Arlington. The plant will employ about 250 people.

Wallbox says it chose Arlington for the plant because it’s a central transit hub between the East and West coasts, it affords easy access to cross-country highway corridors and it’s close to major cities like Dallas and Fort Worth.

“The sheer size of the market, Texas’ central U.S. location, its abundance of wind power and the presence of industry leaders will help generate new jobs in this high-growth sector as the North American auto industry moves away from internal combustion engines to EV,” Boyd said.

Texas is Milking the Value of Cheese

Wisconsin reigns as the country’s top producer of cheese, but Texas is nipping at its cheddar.

Queso in point: In April 2021, Great Lakes Cheese introduced plans for a nearly $185 million cheese packing and distribution facility in Abilene that will create more than 500 new jobs. The facility is expected to generate an economic impact of $1.3 billion over 10 years.

“This is the biggest opportunity recruited to the city of Abilene in the last 30 years and is the perfect example of what strategic economic development should be. This successful partnership with Great Lakes Cheese will benefit Abilene and the state of Texas by generating opportunities for decades to come,” Abilene Mayor Anthony Williams said.

Two months later, in June 2021, California-based Hispanic foods company Cacique said it will open a new food-processing operation in Amarillo with a capital investment of $88 million and the creation of 187 jobs. Cacique produces Mexican-style cheeses, cremas and chorizos.

“Amarillo is a natural home for Cacique, as the Texas Panhandle is a magnet for the manufacturing and food-processing industries,” Abbott said.

CBRE, Charles Schwab, Hewlett Packard Enterprise, Oracle and Tesla are just five high-profile examples of companies pulling out of other states (especially California) and relocating to Texas. And the stream of businesses planting their flag in the Lone Star State isn’t drying up.

For instance, engineering and construction giant AECOM moved its headquarters from Los Angeles to Dallas in October 2021. AECOM said it made the move to take advantage of Dallas’ growing stature as a home for corporate headquarters and its pool of corporate talent.

Observers anticipate other companies will follow in AECOM’s and CBRE’s footsteps and set up shop in Texas.

“We have seen unprecedented interest in Texas among our site-seeking clients. This is a time of historic mobility for people eager to relocate to less expensive areas with new career opportunities,” Boyd said.

“Texas, despite all of its record-setting growth, still offers our manufacturing, office and logistics clients compelling business cost savings in most measures, especially versus states like California, Illinois, New York, New Jersey and Connecticut,” Boyd added.

What’s on the Horizon for Texas?

Experts generally agree that Texas sits in a prime position to score even more economic victories in 2022. In part, Allen said, that’s because “Texas offers a verified track record of success.” Throughout the state, business executives can attest to how relocating to or expanding in Texas has been lucrative, according to Allen.

Aside from industries like semiconductor and automotive, economic development experts mention cryptocurrency, aerospace, renewable energy and life sciences as sectors to watch in Texas. As it relates to the emerging cryptocurrency sector, Abbott has embraced the industry and has said he would like Texas to be the country’s cryptocurrency “leader.”

Patton said Texas also holds appeal because its population growth continues to add to the state’s talent pool. From 2010 to 2020, the Texas population jumped by 15.9 percent. By comparison, the population of California grew just 6.1 percent during that period. Boyd said some executives and officials in California continue to be “business climate deniers” regarding their state’s eroding position as an economic force.

In tandem with Texas’ population growth, Allen pointed out that the state shattered an all-time record for job creation by reaching nearly 13.06 million jobs in January 2022.

“The Lone Star State has long led the nation in job creation as we attract more business investments and greater opportunity for working Texans each and every day,” Abbott said. “Thanks to employers large and small, the future of Texas shines bright with the best workforce in America.”