Governor Kathy Hochul announced Electrovaya, Inc., a producer of lithium-ion batteries for transportation and utility storage, has selected the Town of Ellicott in Chautauqua County as the location for its first U.S. plant. The publicly traded company will create its newest production facility, generating up to 250 jobs and, when fully operational, producing over a GWh of batteries annually. The investment supports the broader New Energy New York initiative, whose goal is to create a National Hub for Battery Innovation and Manufacturing.

“New York State continues to play a leading role in the research and development of advanced, cutting-edge, and innovative energy technologies,” Governor Hochul said. “Thanks to state resources, Electrovaya is bringing up to 250 jobs to Chautauqua County and deepening New York’s involvement in the growing clean energy sector. The race is on to capture the high-paying jobs that come with clean tech, and there is no place like New York for these manufacturers to grow, operate, and thrive.”

The company will set up operations at 1 Precision Way in an effort to tap into the robust lithium-ion battery demand for e-forklifts, e-trucks and e-buses. Electrovaya selected this southern Chautauqua County facility after determining it as the best location for the company to provide services to its growing customer base in the United States, given its skilled labor force and available renewable electricity amongst other advantages. 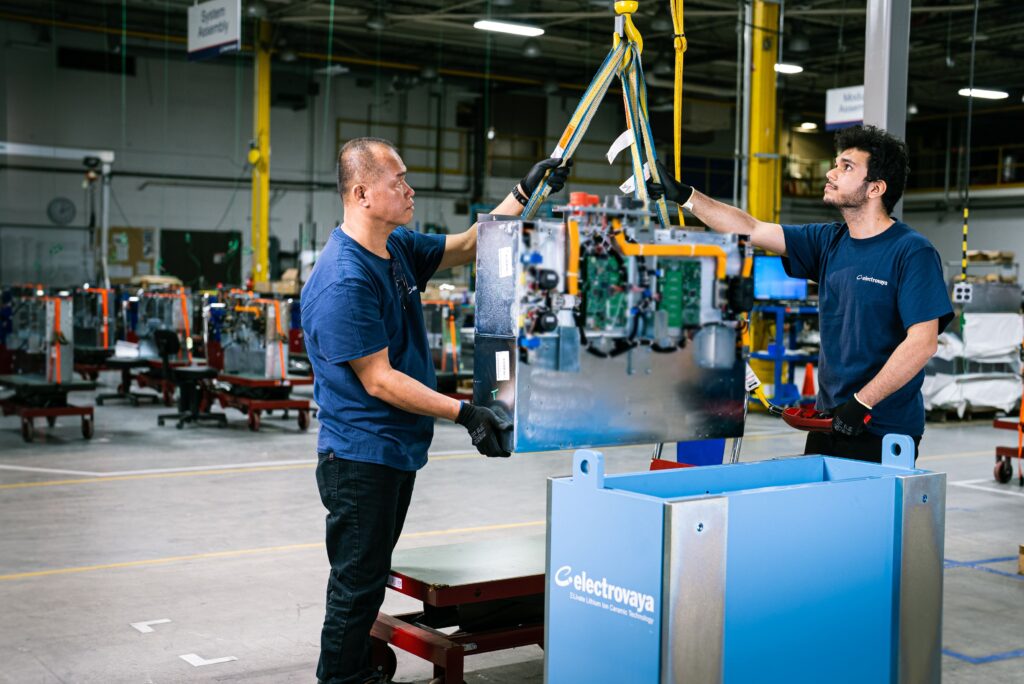 CEO of Electrovaya Dr. Raj Das Gupta said, “As the United States and world enter an unprecedented phase of growth for electric vehicles and electro-mobility, lithium-ion batteries and the components within them are crucial for the industry’s success. Electrovaya is proud to be bringing our sustainable technologies and approaches to New York State, as Electrovaya’s first United States-based commercial facility. The facility will produce lithium-ion cells and modules, critical components for the manufacture of lithium-ion batteries. We are pleased to support the creation of high-quality jobs in Chautauqua County and look forward to our continued growth in Western New York.”

Empire State Development (ESD) is assisting the project with up to $4 million through the performance-based Excelsior Jobs Tax Credit Program and $2.5 million in Regional Council Capital Funding to establish this production and manufacturing facility for lithium-ion batteries at a former manufacturing facility, leveraging the creation of 250 new jobs and the production of 1GWh of battery and energy storage devices over the next five years. In July, the New York Power Authority (NYPA) Board of Trustees approved a more than 1.5-megawatt low-cost hydropower allocation to Jamestown under the Power Authority’s Industrial Economic Development program to meet the increased electric load resulting from Electrovaya’s Town of Ellicott expansion. The initial cost for the facility has been placed at approximately $75 million, and it is expected to open in the fall of 2023.

Western New York Regional Economic Development Council Co-Chair and Buffalo State College President Dr. Katherine Conway-Turner said, “Demand is growing for clean energy components like batteries, and Western New York is working to be at the forefront of this industry of the future. Companies like Electrovaya are bringing new jobs and new investment to Chautauqua County, thanks to New York’s commitment to clean energy and innovation.”

State Senator George M. Borello said, “Congratulations to all who helped secure another economic development win for Chautauqua County and our whole region. Our community has proven time and again that it has the workforce, infrastructure and business-friendly leadership that manufacturers like Electrovaya are seeking. The company’s forward focused technology will complement other burgeoning industries in the area and contribute to job and economic growth in the years ahead.”

Assembly-member Andrew Goodell said, “It is great news that the Chautauqua County IDA, its staff, and County Executive Wendel have convinced Electrovaya to proceed with its lithium battery manufacturing plans in Jamestown. These products will play a key role in our future. Our area has a proud history of dedicated and high-quality employees that will undoubtedly make this project a success.”

Chautauqua County Executive Paul M. Wendel said, “I am excited that Electrovaya has selected Chautauqua County as a venue to expand its operations. Its investment will bring new life to the old Heidenhain facility at the Mason Industrial Park as the company continues its success in lithium battery production while creating up to 250 jobs in our County over the course of 10 years.”

Town of Ellicott Supervisor Janet Bowman said, “The Town of Ellicott is pleased and excited to have Electrovaya become the latest business addition to the Mason Industrial Park. The purchase of the former Heidenhain property adds another piece to our goal of filling the industrial park. We welcome this highly successful Canadian business, Electrovaya, to the Town of Ellicott.”

Deputy County Executive for Economic Development and CEO of the County of Chautauqua Industrial Development Agency Mark Geise said, “I’m grateful that the CCIDA could be a part of securing a responsible party in a burgeoning industry to purchase and invest in this wonderful building and put it back into productive use. The CCIDA will continue to work with Electrovaya to ensure they have the resources they need to get production underway and are sustainable in the long-run. Besides Electrovaya, I would like to thank Invest Buffalo Niagara, Empire State Development, the Town of Ellicott, the CCIDA Team, New York State Power Authority, Hanna Holt Reality (Melissa Uber), and all of the other stakeholders who had a hand in bringing this project to fruition.”

Jamestown Board of Public Utilities General Manager David L. Leathers said, “What absolutely great news for Chautauqua County and the greater Jamestown area! The Jamestown BPU territory remains a very attractive location for manufacturing businesses and the BPU Board Members and Staff are excited about welcoming Electrovaya into our community. Our objective is to attract clean energy and climate technology manufacturing leaders to Jamestown and this new lithium-ion battery and cell producer is an exciting addition to the industrial hub on the eastern part of our system. We are committed to support the Electrovaya team and help them to thrive in their new facility.”