Port Houston has come a long way since 1956, when it became the first port in the nation’s history to receive a containerized cargo shipment—56 containers carried from New York aboard the converted tanker Ideal-X.

Spread along the Houston Ship Channel, the Port Houston’s 25-mile-long diversified complex of nearly 200 private and public industrial terminals lie just a few hours from the Gulf of Mexico and the world.

Last year, the largest port on the Gulf saw more than 247 million tons of cargo, loaded and off-loaded from more than 8,200 vessels and 215,000 barges, move through its facilities, with the port handling, in all, 52 percent of project cargo moving through other ports in the region.

Earlier this year, the Port Houston Authority (PHA) signed a project partnership agreement with the U.S. Army Corps of Engineers to widen and deepen the Houston Ship Channel.  Dubbed Project 11, the $1.1 billion dredging project could be complete as soon as 2026, allowing for larger, neo-Panamax container vessels to call Houston. “Our port serves as the anchor for our Texas region,” says said Port Houston Executive Director Roger Guenther. 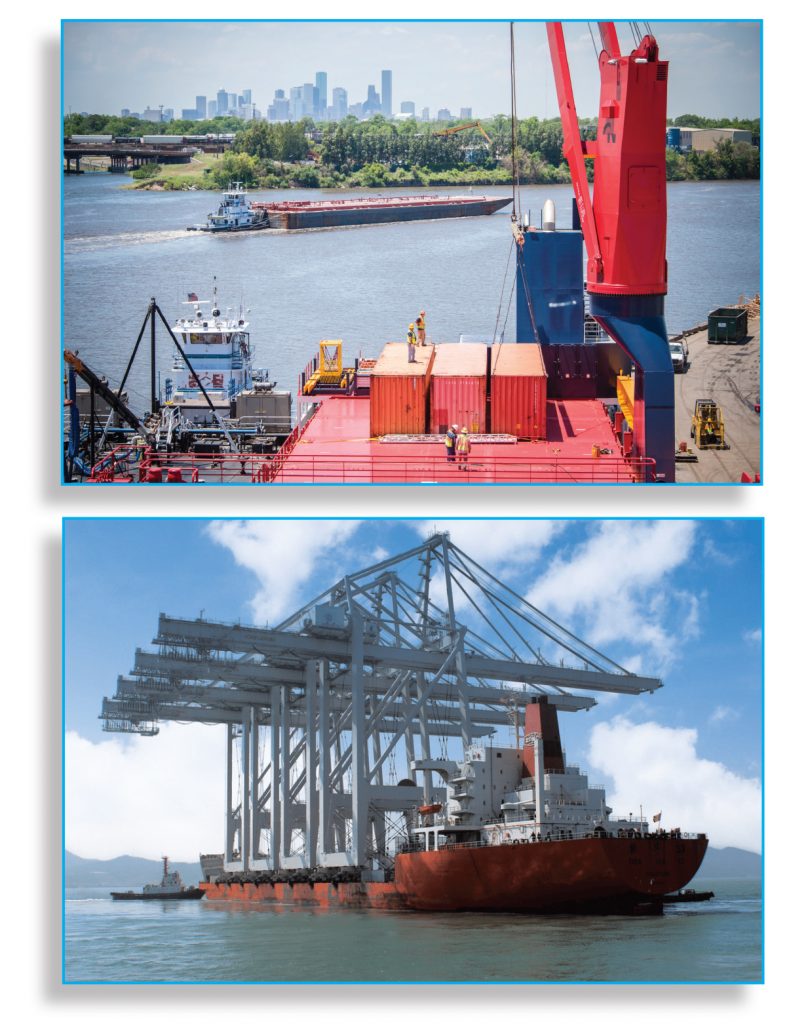 The agreement “is a critical step to provide a wider, deeper channel that maintains two-way vessel traffic to more safely and efficiently deliver everyday goods and petrochemical products to and from the region,” he says.

At the same time, the port has drafted its far-reaching 2040 Plan to address a broad range of topics covering infrastructure, operations, emerging technology, environmental stewardship, safety and security, community partnerships, and market dynamics.

Port Houston “does a great job ensuring the right infrastructure is in place to deliver a superior customer experience,” says PHA Chief Commercial Officer John Moseley. “That means ensuring we have a large and skilled workforce to do the job, the ship channel necessary to handle larger ships safely in addition to the landside facilities, equipment and operating systems to accommodate our customers’ needs.”

With its eye on the future, Port Houston “will continue to deliver on its 2040 Plan, a comprehensive long-range plan geared towards long-term resiliency, sustainability, and preparing for the future,” says Moseley.

The 2040 plan, he says, “defines what our priorities should be, what projects need to be developed, what investments are required, and what policies should be pursued to ensure we not only remain competitive with other ports but also continue to deliver on our mission to move the world and drive regional prosperity.”

Successfully weathering seven hurricanes over the past two years, as well as the impact of the COVID-19 pandemic, the Port of South Louisiana is on track to maintain its position not only as the No. 1 grain export port in the United States, distributing over 50 percent of the nation’s grain, but also as the highest ranked export seaport in North America.

Resident industries within the Port which stretches 54 miles along the Mississippi River from New Orleans to Baton Rouge, includes companies in the petrochemical, fertilizer, and logistics trades that have, over the past several years, attracted more than $23 billion in investments—all due to the port’s location and its many competitive advantages.

Earlier this year, Greenfield Louisiana LLC filed the appropriate federal and state permits to build a $400 million grain export elevator and terminal at the Port with 36 on-site storage bins connected to the dock by enclosed conveyer belts and multiple dust collection systems to help reduce any environmental impact. The initial facility will employ 100 workers and span 820 feet in length with the ability to berth one Post-Panamax bulk carrier vessel with a loading capacity of up to 120,000 bushels of grain per hour.

The Port of South Louisiana—which boasts the fourth most active Foreign Trade Zone in the country—completed construction of a six-track railyard in St. Charles Parish.

The new facility, located at SoLaPort—a port-owned property on the west bank of the Mississippi River—is configured to accommodate up to 350 rail cars exclusively for Dow Chemical and is accessible via a rail spur designed and installed by the global chemical giant on the south side of the facility.

Dow’s rail project, says Aucoin, “is exemplary of the multi-modal opportunities along our 54-mile port jurisdiction. Although the Mississippi River is our anchor resource, the rail and road systems, plus our air facility, actualize the extraordinary connectivity at the Port of South Louisiana.”

All in all, Georgia’s deepwater ports and inland barge terminals support more than 496,700 jobs throughout the state, and annually contribute $29 billion in income, and generate $122 billion in revenue and $3.4 billion in state and local taxes.

With an eye to future demand, the GPA has unveiled an impressive menu of expedited future expansion projects.

At present, GPA has established one inland rail terminal at the Appalachian Regional Port in Northwest Georgia. Planning is now under way for the Northeast Georgia Inland Port near Gainesville with construction will be covered in part by a $46.8 million federal grant.

The Authority also plans to build rail hubs in strategic locations across Georgia to provide retailers and manufacturers with additional efficient links to the deepwater Port of Savannah.

Already North America’s single largest container terminal, the 1,345-acre Garden City Terminal is surrounded by the highest concentration of private distribution center development in the Southeastern U.S. With an industrial market of 80 million square feet, the area has enough land permitted for private development to more than double its warehouse space.

At Garden City Terminal, the Mason Mega Rail project “will deliver the largest on-dock intermodal rail facility for a port authority in North America,” says GPA Executive Director, Griff Lynch. “The expanded rail infrastructure at will allow for direct rail service to major Southeast and Midwestern markets. With the most neo-Panamax vessel calls in the South Atlantic, the Port of Savannah has the cargo capacity to quickly load trains bound for inland destinations.”

In addition, the Savannah Harbor Expansion Project is now nearly 90 percent complete. With completion scheduled for December of this year, Savannah will boast a high-tide depth of 54 feet that will allow vessels in the 16,000-plus TEU range to take heavier loads up and down river to and from the Garden City terminal with fewer tidal restrictions.

“Savannah’s location as the most westerly major port on the U.S. East Coast and centrally located within the Southeast, means the Georgia Ports Authority provides unmatched speed to market, with shorter overland routes to major inland destinations,” says Lynch.

Although FY2021 was marred by the nationwide business shutdowns brought about by the COVID-19 pandemic, the South Carolina Ports Authority (SCPA) faced an unanticipated surge in imports as consumers’ buying habits shifted from services and travel to retail and home goods.

That surge gave good reason for the SCPA to celebrate as its keystone Port of Charleston complex handled a record 2.55 million TEUs in its fiscal year that ended on June 30, a 9.6 percent  increase from fiscal year 2020, at its Wando Welch, North Charleston and Hugh K. Leatherman container terminals.

The boom has also been felt at the SCPA-owned and operated public seaport and intermodal facilities in the communities of Charleston, Dillon, Georgetown and Greer, where the port authority is expanding its intermodal facility on the heels of sustained record trade activity in upstate South Carolina and the U. S. Midwest. 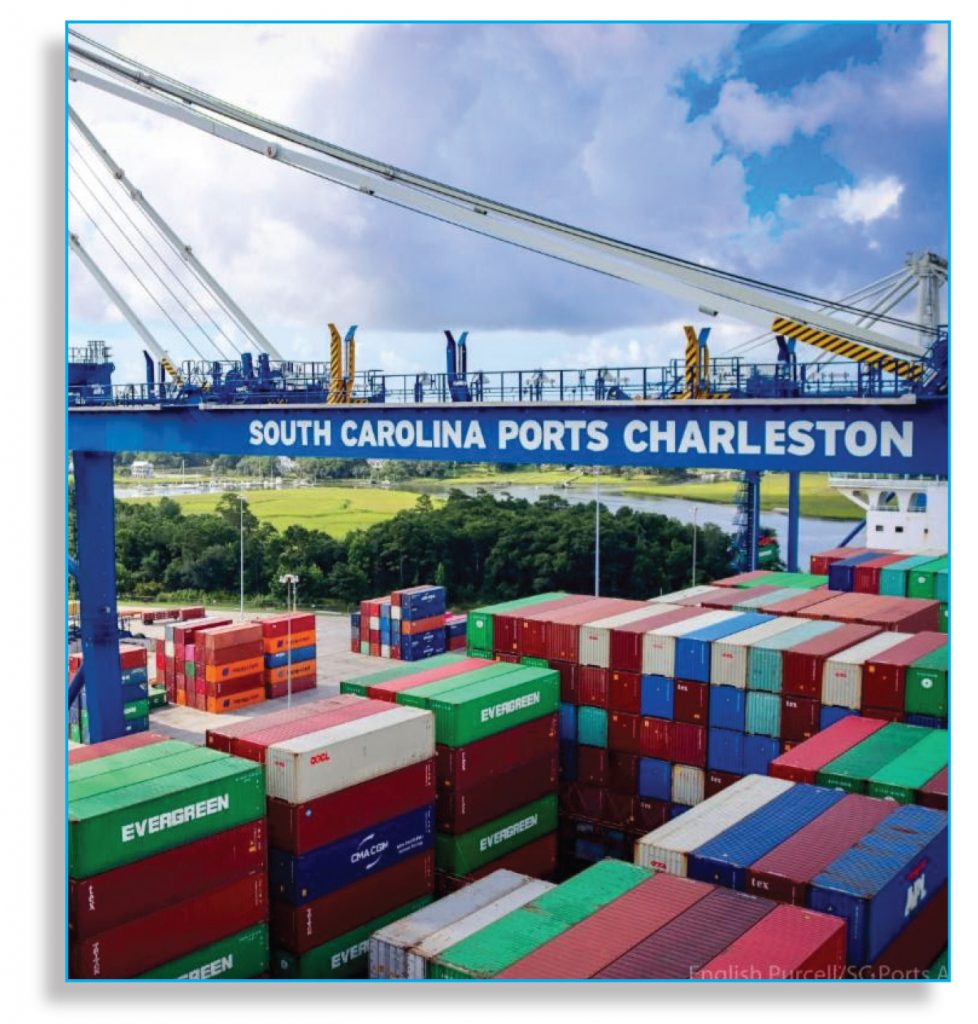 “As the only port in the country with new terminal capacity, SC Ports has the ability to handle the growing cargo volumes and rising retail imports coming through the Port of Charleston,” says SCPA President and CEO Jim Newsome. “We have been highly focused on delivering world-class infrastructure at the right time.”

A good example – the March opening of Phase One of the Leatherman Terminal, which is forecasted to boost total East Coast port capacity by 700,000 TEUs annually.

“At full buildout, Leatherman Terminal will have three berths capable of handling 2.4 million TEUs annually,” says Newsome. “We’re also working to develop near-dock rail close to Leatherman Terminal and an inner-harbor barge operation. These projects will ensure the swift movement of goods to market for customers.”

Another case in point is the planned expansion of Inland Port Greer, which extends the Port of Charleston’s reach 212 miles inland via Norfolk Southern rail service, and enables companies throughout the Southeast and Midwest to quickly receive import goods and move export products to overseas markets through the Port of Charleston.

All these investments, Newsome says, “are complemented by the Charleston Harbor Deepening Project, a major effort that is on track to achieve a 52-foot depth in 2022. This depth will make Charleston Harbor the deepest on the East Coast, capable of handling mega container ships any time, any tide.” 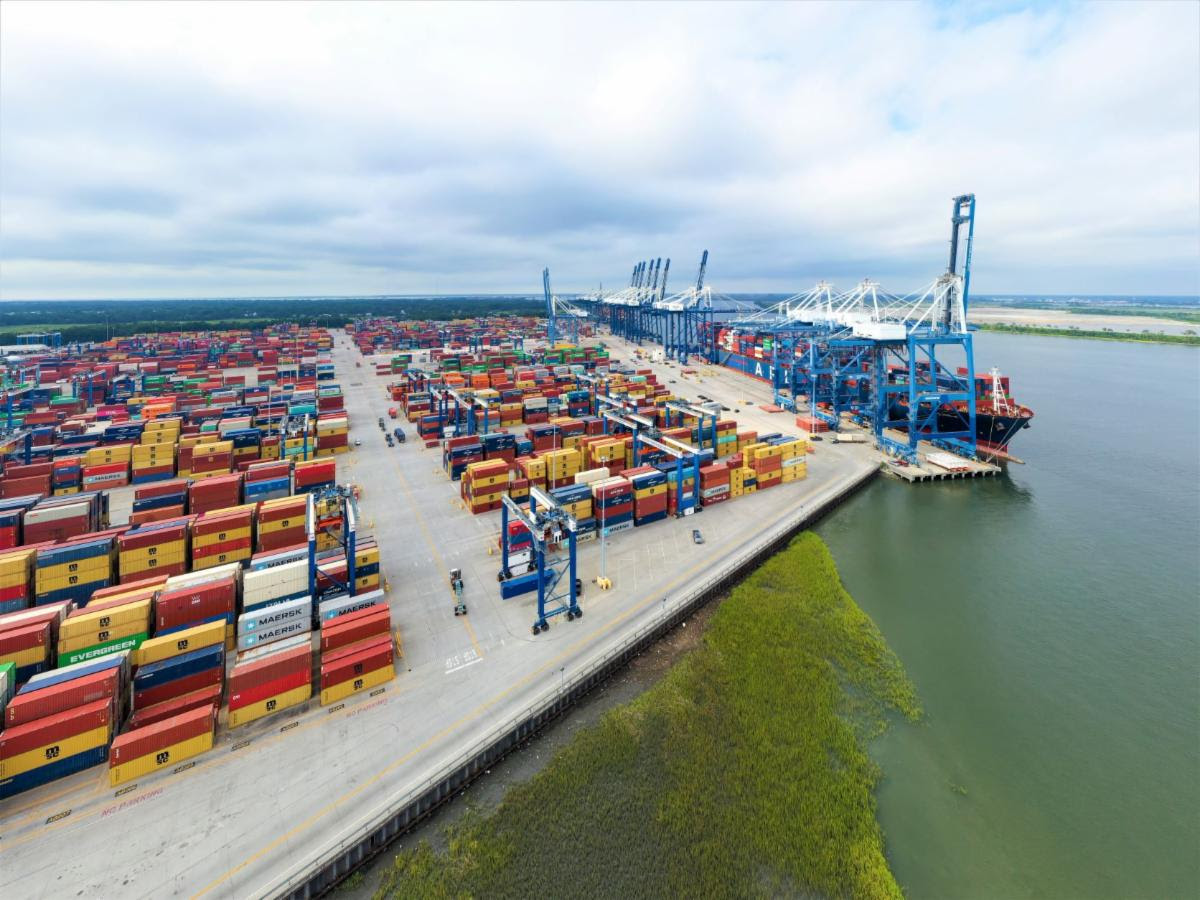 SC Ports Investing in Capacity Ahead of Demand