Auburn, AL — The GE Aviation additive manufacturing center in Auburn has achieved a major milestone — it shipped the 100,000th fuel nozzle tip grown on sophisticated 3-D printers at a plant that is pioneering new technologies for producing jet engine components.

“As GE grows the number of jet engine parts made with additive manufacturing methods, we expect to continue to advance our manufacturing capabilities right here in Auburn,” said Andrea McAllister, plant leader for GE Aviation Auburn.

“We encourage those interested in helping build the future of flight with innovative technologies to join the GE Aviation team.” 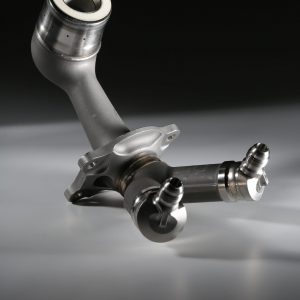 Eric Gatlin, general manager of additive manufacturing for GE Aviation, added “there is a bright and exciting future for this technology.”

Governor Kay Ivey applauded the achievement at the Alabama plant.

“This is an exciting development, and I look forward to seeing what GE Aviation and its Alabama workforce will be able to achieve in the future,” she added.

Additive Technologies
The fuel nozzles produced in Auburn are installed in the CFM LEAP engine, which entered service in 2016 and surpassed 10 million flight hours earlier this year. The CFM LEAP engine is a product of CFM International, a 50-50 joint company between GE and Safran Aircraft Engines. The fleet is providing operators with 15% better fuel efficiency than previous generation engines.

Each engine has 18 or 19 fuel nozzles, depending on the specific model.

“I’m excited to congratulate GE Aviation on the success they’ve seen here in Auburn and would like to thank them for their investment in our community,” Mayor Ron Anders said. “For years, GE Aviation has been a steady source of high-quality jobs and high-tech production in Auburn.

“With the resources at Auburn University and their efforts in additive manufacturing research and training, we are excited about what this partnership will continue to bring in the future,” he added.

Unlike traditional manufacturing methods that mill or cut away from a slab of metal to produce a part, additive manufacturing (also referred to as 3D printing) grows parts directly from a CAD file using layers of fine metal powder and an electron beam or laser.

The result is complex, fully dense parts without the waste, manufactured in a fraction of the time it would take using traditional methods.

Under the additive manufacturing method, the number of parts in a single fuel nozzle tip was reduced from about 20 pieces previously welded and brazed together to one whole piece. The nozzle tip’s weight was cut by about 25 percent.

CMC Milestone
The Auburn facility in not GE Aviation’s only cutting-edge manufacturing operation in Alabama.

In 2018, the company opened a $200 million factory complex in Huntsville that is America’s first production center for unique materials used to manufacture Ceramic Matrix Composites (CMCs).

“This achievement could not have happened without the great production teams in Asheville and Huntsville, supported by GE’s incredible engineering teams at GE Aviation and GE Research.”

September 1, 2022
Ecore International plans to invest $25.5 million to open a state-of-the-art manufacturing and recycling facility in the Southeast Alabama city of Oza...