By Kentucky Cabinet for Economic Development

The future of the automotive industry is electric, literally. With the rise of the electric-vehicle (EV) industry and the rapid growth of companies directly supporting this new market, Kentucky has wasted no time positioning itself as a national leader within the EV market in the United States.

Kentucky’s momentum in the EV and battery sector is no accident. The combination of large-scale projects from some of the industry’s largest companies, coupled with various announcements directly contributing to the supply chain and logistical support of the sector, has set the commonwealth up for incredible growth within this electric market.

“The EV and battery infrastructure we are creating is going to not only make Kentucky an industry leader in this field, but also attract quality companies and jobs for Kentuckians for decades to come,” Governor Andy Beshear said. “The commonwealth has an unbelievable number of resources that make it the perfect location for anyone focused on growth within the EV and energy storage industries. The commitment we are seeing from new and existing Kentucky companies is a testament to the foundation we have created with our resources and incredible workforce. We are going to be the nation’s top producer of electric-vehicle batteries, and that is only the beginning. We will continue to attract and invest in innovative companies that will help grow, support and supply the EV industry. The future is now in Kentucky, and we are here to stay.”

Within the past 14 months, the commonwealth has announced the two largest economic development projects in its history, and together they have established Kentucky as the new EV battery capital in the United States.

In August, Gov. Beshear joined state and local officials and representatives from Japan-based Envision AESC to break ground on a $2 billion, state-of-the-art gigafactory in Bowling Green’s Kentucky Transpark. The 30 GWh plant is creating 2,000 skilled jobs in South Central Kentucky to produce battery cells and modules that will power up to 300,000 next-generation EVs by 2027 and will be manufactured for multiple global automotive manufacturers.

“Bowling Green has for many decades played a leading role in the automotive industry,” said Jeff Deaton, managing director of Envision AESC U.S. “Since the 1960s, when the town was connected to Interstate 65, and in the 1980s when General Motors built its major manufacturing plant. Auto Alley is now rapidly leading in U.S. EV battery manufacturing. So, the decision to center Envision AESC’s investment in Kentucky was an obvious choice to us, in large part because of the readiness of the skilled workforce required to deliver a project of this scale and importance. Today, batteries are fast becoming a strategically important industry, powering the United States’ move to electric vehicles and, importantly for Kentucky and Bowling Green, powering the economy and jobs. Envision AESC’s $2 billion investment in a brand new, state-of-the-art gigafactory in the Kentucky Transpark will provide 2,000 new high-value, future-proof jobs for the people of Warren County.”

The announcement of the Envision AESC investment came just months after Kentucky’s first game-changing EV battery project. In September 2021, Gov. Beshear and executives from Ford Motor Co. and SK On announced the BlueOvalSK Battery Park in Hardin County. The transformational $5.8 billion project is the single-largest economic development investment in state history and is set to create 5,000 jobs in the heart of the state. 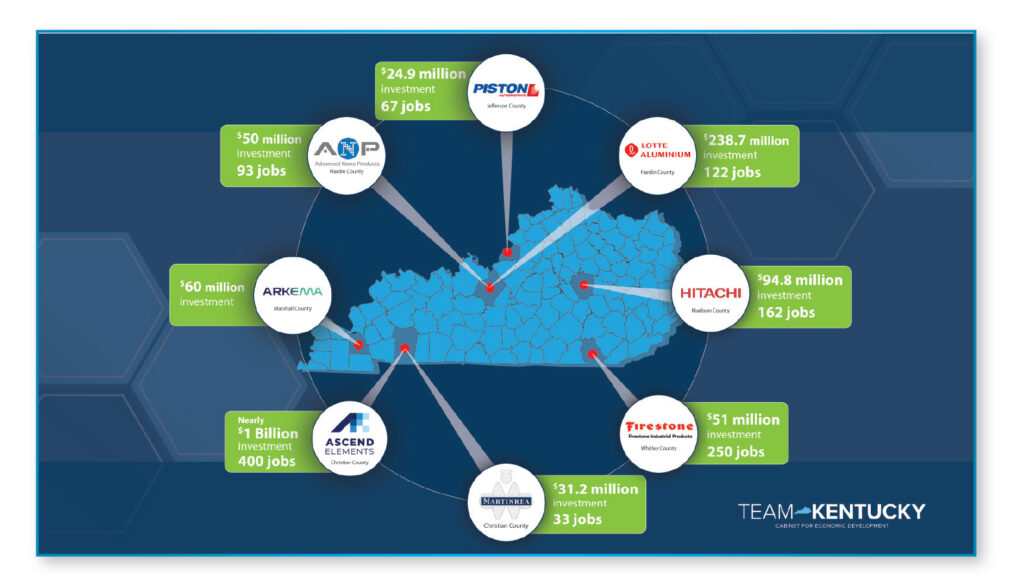 “Ford is proud to be building the electric-vehicle future in Kentucky, a state where we have a 109-year history and where we’re the largest vehicle manufacturer,” said Gabby Bruno, economic development director for Ford Motor Co. “Ford and SK On are investing nearly $6 billion in the Bluegrass State to manufacture batteries that are critical to our continued EV transformation. Ford’s longstanding relationship with the commonwealth, its central location, infrastructure, high quality of life for our talented workforce, and robust supplier network make Kentucky an attractive place to invest. We are excited about the economic impact that BlueOvalSK Battery Park will have on Kentucky and this new electric chapter of our company’s story.”

BlueOvalSK will be home to two battery plants to power the next generation of Ford and Lincoln electric vehicles, which Ford leadership anticipates will make up at least 40 percent of the company’s global sales by 2030. The production of advanced lithium-ion batteries will generate 86 GWh and is set to begin in 2025. The operation’s high-tech capabilities will increase the cost-competitiveness and technological expertise of EV battery production in Kentucky and in the United States, making electric vehicles more accessible and affordable for motorists.

While these announcements have helped secure Kentucky as an EV industry leader nationally, several other projects will support the electric vehicle and battery industry and ensure Kentucky’s sustained success in this market.

Leaders at Ascend Elements, a producer of advanced, sustainable battery materials made from recycled lithium-ion batteries, announced in August 2022 they will invest $310 million and create 250 full-time jobs in Christian County. Thanks to more than $480 million in federal grants awarded by the U.S. Department of Energy to support increased production of EV batteries and associated materials in the United States, the project will now include a nearly $1 billion investment and create more than 400 full-time jobs to establish the company’s largest U.S. operation, known as Apex 1.

“Clean energy and climate technology industries are bringing good jobs to communities across the country, and we couldn’t be happier with our decision to locate our Apex 1 facility in Southwest Kentucky,” said Ascend Elements CEO Mike O’Kronley. “We’re building something in Kentucky that doesn’t exist anywhere in the United States – a domestic source of sustainable lithium-ion cathode material for EV batteries. We looked at more than 50 locations for our Apex 1 facility and the Hopkinsville, Kentucky, site was the only one that met all our requirements. The site offers easy access to transportation, clean renewable power and a diverse workforce. Proximity to electric-vehicle manufacturers and lithium-ion battery factories in the southeast was another key requirement.”

In January 2022, Piston Automotive LLC, a provider of automotive assemblies, including advanced electric- and hybrid-vehicle battery systems, increased the scope of a previously announced Jefferson County expansion that now includes 117 full-time jobs with a $26.3 million-plus investment. The expansion includes a new production line and increased capabilities to support the growing market demand of the EV industry in Kentucky and throughout the region.

The industry’s growth extends into Southeastern Kentucky as well, as Firestone Industrial Products broke ground in August on a $50 million expansion in Williamsburg. The 68,000-square-foot addition to the company’s 375,000-square-foot facility is creating 250 full-time jobs to support its growing presence in the EV market. A manufacturer of automotive air springs, Firestone has operated in Southeastern Kentucky since 1989 and currently employs more than 500 people.

Kentucky’s many advantages, including its longstanding automotive strength, combined with a proactive, aggressive approach to attract dynamic companies that support a wide range of EV and battery functions, have set the standard for the rapidly growing electric vehicle and battery industry.

Leveraging its unique mix of central geographic location, logistics strength and skilled workforce, the commonwealth has established itself as not just an excellent landing spot for EV-related companies for decades to come, but as the premier destination for one of the fastest-growing and most important industries of the future.

January 27, 2023
Carter Lumber Co., one of the nation’s largest lumberyard businesses, will expand its presence in Bowling Green with an $8.1 million investment crea...