and treat illnesses or diseases, or are used to detect, measure, restore, correct and modify a bodily function or structure for health reasons. Industry players create everything from dental equipment/supplies, electro-medical equipment and in-vitro diagnostics, to irradiation apparatuses, surgical appliances and medical instruments.

Top Medical Device Firms by Global Revenue
To better appreciate the medical device industry’s economic impact in the U.S. as it helps to look at the Top 10 global companies through the lens of their 2017 worldwide revenue. These firms have a strong presence in America in terms of innovative products, market penetration and/or employment numbers. (Firms were identified in a report by ProClinical, a health industry recruitment agency.)

Medtronic – $29.7 billion. With an executive office based in Dublin, Ireland, the global king of medical device firms is Medtronic. It boasts over 370 locations in over 160 nations, including its key operations headquarters planted in Minneapolis, Minnesota. Its $2 billion R&D budget and over 53,000 patents has helped Medtronic make advancements in cardiac/vascular, diabetes, restorative therapies and other areas benefitting millions of people. Its 2015 acquisition of Irish-based Covidien, another global medical device manufacturer, continues to buoy sales.

DePuy Synthes (Johnson & Johnson) – $26.6 billion. New Brunswick, NJ-based Johnson and Johnson has a collection of eight medical device subsidiaries, including powerhouse DePuy Synthes, which is actually a mix of its own orthopaedic and neurosurgery companies. DePuy is headquartered in Raynham, Massachusetts. Its portfolio of products/services serve markets of joint reconstruction, trauma, spine, sports medicine, etc. 2016 to 2017 revenue: up 5.9 percent.

Fresenius Medical Care – $20.7 billion. Germany-based Fresenius Medical Care is the world’s leading provider of products/services for people living with chronic kidney failure. The company’s global network of over 3,800 dialysis clinics care for more than 329,000 patients. Additionally, Fresenius operates 41 production sites on every continent, and makes products such as dialysis machines, dialyzers and related disposables. Its North American headquarters is in Waltham, Massachusetts. 2016 to 2017 revenue: up nine percent.

Philips Healthcare (Philips) – $20.7 billion. A subsidiary of global tech behemoth Philips, Philips Healthcare is a health technology leader in areas of devices serving cardiology, oncology and women’s health with diagnostic imaging systems, clinical informatics, and much more. It is headquartered both in The Netherlands and Andover, Massachusetts. 2016 to 2017 revenue: up two percent.

GE Healthcare (General Electric) – $19.1 billion. Chicago-based GE Healthcare, a subsidiary of General Electric, is a manufacturer and distributor of diagnostic imaging agents and radio-pharmaceuticals for imaging modalities used in medical imaging procedures. The company will continue to invest in AI medical technology endeavors for future success. 2016 to 2017 revenue: up five percent.

Becton Dickinson – $12.1 billion. Founded in 1897, Becton, Dickinson and Company (BD) manufactures medical devices, instrument systems, and reagents, and was one of the first companies to sell US-made glass syringes. This Franklin Lakes, New Jersey-based company is comprised of two segments: BD Medical and BD Life Sciences. In November 2018, Becton Dickinson’s market capitalization was valued at over $63 billion. 2016 to 2017 revenue: down 3.1 percent.

Industry Answers Call to Solve America’s Raging Opioid Crisis
Every day countless patient lives are saved or improved thanks to U.S. medical device players. Now, some of those same manufacturing geniuses are on the forefront of an entirely new healthcare battle: fighting the devastating

This massive problem has tentacles in almost every community. According to the Centers for Disease Control and Prevention (CDC), more than 72,000 people in the U.S. died from drug overdoses in 2017 — nearly 200 a day. That’s up from 2016, when 64,000 people died from overdoses. Both years, at least two-thirds of those deaths were linked to opioids, which also can affect newborns due to opioid use or misuse during pregnancy.

After the current Administration declared a public health emergency in 2017, new funding from Congress was approved this past Fall. Key government agencies have began disbursing well over $1 billion in grants to fight opioid addiction via treatment, prevention, and recovery services, as well as data gathering and prevention.

Last May, the U.S. Food and Drug Administration (FDA) launched an “innovation challenge” to spur development of medical devices (including digital health technologies and diagnostic tests) to prevent and treat Opioid Use Disorder (OUD). Part of the deal involves snipping miles of regulatory “red tape” to achieve a speedy approval process for the handful of chosen medical device firms.

The FDA secured over 250 submissions from medical device companies until its September 30th deadline. In December, the winning firms to receive FDA support were announced:

A notable company to watch which didn’t win the challenge is Florida-based Stimwave, which hoped to have its Halo product approved within a year as an opioids alternative. The firm invents and manufactures a range of tiny wireless pain-control technologies already clinically proven to decrease and manage chronic pain. One of its innovative miniature stimulators manages chronic migraines; that’s important as opioids currently are used to treat about half of all patients visiting emergency rooms with migraines.

Stimwave’s pain management “super power” is its ability to allow pain sufferers “to [manage] their pain wherever and whenever they want,” said Laura Tyler Perryman, Stimwave chairman and co-inventor. Now pain can be controlled “opioid-free with wearable and wireless iOS devices, including smart phones and watches.” The firm’s technology uses a tiny injectable microchip device to deliver small energy pulses to electrodes near surrounding nerves. The pulses trigger a reaction enabling the brain to provide pain relief by remapping specific pain signals.

Politics aside, President Trump’s new pro-growth policy agendas, which include bold tax reform and regulatory relief, clearly has encouraged manufacturing firms to create new jobs and give larger paychecks. According to the third-quarter 2018 Manufacturers’ Outlook Survey conducted by the National Association of Manufacturers (NAM) optimism by manufacturing firms soared this past year at 93.9 percent, the highest-year average in history. Businesses are thriving, and in broad-stroke terms, 718 respondents representing manufacturing operations of all sizes expect to hire more workers, raise wages, increase investments and enjoy future higher sales.

The top challenge for manufacturers surveyed is the inability to attract and/or retain a quality workforce. This has had so many negative effects, as many firms have turned down new business (28 percent), curbed plans to expand or create new jobs (33 percent), and/or cited this workforce problem as their biggest threat to viability (45 percent). NAM says more than 400,000 jobs are open in the sector today, and over the next decade, a whopping two million manufacturing positions could go unfilled.

NAM’s Manufacturing Institute has an inspiring answer to this labor shortage via its nascent “Heroes MAKE America” (HMA) program. Launched January 2018, it is building a labor pipeline linking some of the 200,000 service members transitioning out of the military each year to hard-to-fill civilian manufacturing careers. The Institute currently has training programs at Ft. Riley, Kansas, and Ft. Hood, Texas and plans to expand to additional bases in 2019 and beyond.

One manufacturing advocate, Terry Iverson, also has a few ideas on how to solve the labor shortage. This president/CEO of Illinois-based Iverson & Company is founder of online initiative CHAMPION (Change How American Manufacturing’s Perceived in Our Nation; ChampionNow.org) and author of Finding America’s Greatest Champion: Building Prosperity Through Manufacturing, Mentoring and the Awesome Responsibility of Parenting. In essence, he advocates parents and schools to once again promote manufacturing careers, which often better fit the skills/personalities of too many young people “guilt-driven to go to college.” Times have changed, and Grandpa’s manufacturing job typically doesn’t have the amazing high-tech elements associated with the typical positions in today’s job market.

Thankfully, the global promotion of science, technology, engineering and mathematics (STEM) studies is having a profound impact on medical device firms and other manufacturers. Relatedly, the 7,000-member Biomedical Engineering Society (BMES) now operates a Medical Devices Special Interest Group. It fosters collaboration among companies, sector professionals and the U.S. Food and Drug Administration to help students explore this career path.

Medical Device Manufacturing Outlook: Full Speed Ahead
The nation’s medical device manufacturing community’s 6,500-some players are enjoying an uptick in activity across the board. The worth of its market share equated to $148 billion in 2015, and an estimated $155 billion in 2017 (per Statista data). The sector employs almost two million people (via direct and indirect employment) in all 50 states, and of those, medical technology directly accounts for more than a half million of those positions. Over

80 percent of U.S. medical device companies employ fewer than 50 employees, and many (mostly start-ups) have little or no sales revenue.

“The medical devices industry is driven by innovation and talent,” explains Luke Moran, director of Strategic Sales and Operations for Aerotek, a leading worldwide recruitment and staffing agency worldwide. “New products are released and almost immediately have built-up demand, so there’s a huge incentive for manufacturers to invest in the resources that will ensure they can meet demand with a quality product.”

“This demand for products has spawned an increased need for specialized manufacturing talent, such as medical device assemblers,” adds Moran. “Just a few years ago, most manufacturers wanted at least two to three years of experience. Now, in part due to the labor shortage, they’re seeing the value in hiring entry-level workers who have aptitude, and training them for six to eight weeks to ensure they are prepared.”

For a real-time employment picture, simply search with the phrase “medical device manufacturing/United States” on Indeed.com, world’s largest employment website. Such a search conducted on 12/5/18 produced 13,497 job listings. Of those, over 2,750 paid more than $105,000 year and over 14,000 were full-time gigs. Locations with the most openings were in California (Irvine, San Diego, San Jose and San Francisco), Arizona, Texas, Oregon, Minnesota, Washington and Ohio.

Employment Opportunities Not Just on East/West Coasts
Access to a skilled workforce, relevant university resources, less governmental red tape and lower operating costs overall are certainly location drivers. Proximity to advanced manufacturing and tech-related partners is an additional plus for those seeking to expand their operations or establish new headquarters.

And while no individual state can claim to be the major hot-bed for every device sub-sector, medical-technology leader California has traditionally held the top spot for the industry overall. IBISWorld research from March 2017 revealed the state was responsible for an estimated 23 percent of all U.S. medical device revenue, and in 2017 had reached revenues of $10 billion after growing by 1.4 percent in the previous five years. In the same five-year timeframe, California’s medical device businesses grew by 3.3 percent to 209 firms, and number of employees grew by 2.5 percent to over 15,600 workers.

Other states with the most number of medical device companies include Minnesota, Massachusetts, Pennsylvania, New York, Florida, Texas, Michigan, Illinois and Georgia. Those with a notable number of workers also include Washington and Wisconsin.

Indiana, in particular, has a fascinating site-selection story to tell. Its city of Warsaw (population: 14,800) is renowned as the “Orthopedic Capital of the World” since it boasts the planet’s largest concentration of orthopedic companies and development. Nearly 13,000 people work in the device cluster for Zimmer Biomet, Medtronic, Depuy Synthes, Paragon Medical, Polywood and others representing one-third of global orthopedic manufacturing. Notably, about 60 percent of all replacement hip and knee products are made in Warsaw. STEM initiatives in Kosciusko County for local students help ensure a steady stream of home-grown, skilled talent.

In the near-term and beyond, the medical device manufacturing industry faces additional pressure to move products to market more quickly while utilizing ever-more-complex product development tools and processes. Compliance issues and regulatory concerns will always be monkeys on their back, too. However as various training programs and educational opportunities increase in America, along more improved production efficiencies, labor shortages should abate. The future is primed for strong growth and the marketing of amazing device products unimaginable just a decade ago.

About the Author: Veteran business communicator Lisa A. Bastian is an award-winning journalist and editor who has authored well over 500 articles for national magazines focused on economic development, global trade and related industries. Since 1986, she has served clients nationwide with her editorial and copy writing skills (see BastianPR.com). Lisa lives in San Antonio, Texas, with her family, and is a former president/board member of the local chapter of the International Association of Business Communicators. 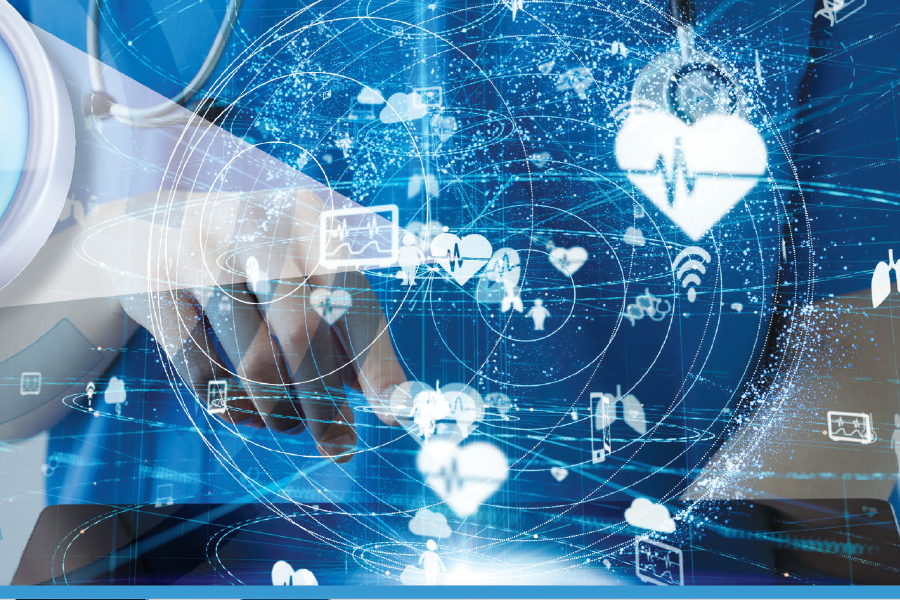