What makes Nevada—The Silver State—stand head and shoulders above its neighbors?

Sharing space at the top of the list is its reservoir of workers, “growing population that is ready to be ‘upskilled’ into the professions that will need trained workers to be competitive in their respective industry areas,” says Andrew Woods, Director of the Center for Business and Economic Research at the University of Nevada – Las Vegas.

“We’re forecasting that 700,000 more people will be moving into the state in the next 18 years,” he says. “Nevada can show the rest of the country how you upscale workers into the industry areas that have the most potential to flourish here.”

This is particularly spot-on as federal government has made it clear that they want to prioritize efforts around clean energy technologies.

“When you’re talking about growth, particularly in tech areas, you’re talking about a highly educated workforce, and the cooperation with educational institutions to educate workers about those new technologies,” says Jared Smith, Director of Economic Development and Tourism for the City of Henderson, Nevada.

In 2021, the state’s public-private training effort kicked-off when California-based Haas Automation, the world’s largest manufacturer of machine tools, sought an expansion location for its production operations.

It was a perfect match. In response, that same year, the Nevada Governor’s Office of Economic Development earmarked $2 million for the College of Southern Nevada (CSN) to develop an advanced manufacturing rapid response program to meet the Haas’ need for trained workers.

“We have a strong partnership with the College of Southern Nevada to produce a Center of Excellence and manufacturing training,” says Smith. “Companies like Haas can partner with CSN and develop training programs so they can have the workforce they need for tomorrow and for the next 10 years.”

In a similar vein, in August, the Nevada Governor’s Office of Economic Development approved $1.6 million to enable Truckee Meadows Community College to develop a training center in Reno that will support Panasonic Energy North America (PENA) in filling 400 jobs that pay upwards of $32 per hour.

More than $1million in state-of-the-art equipment will outfit the facility at the new PENA building in Reno to train  workers ‘upskilling’ in fields such as advanced manufacturing, production systems, automation, and robotics.

Earlier this year, the Biden Administration set a goal to make half of all new vehicles sold in the U.S. in 2030 zero-emissions vehicles (EVs).

In August, California upped the ante when it moved to require all new vehicles sold in the state by 2035 to be either electric or plug-in electric hybrids with 17 other states seriously considering a similar mandate.

The mandated goals for EV use has shifted the development of lithium-ion batteries to the fore as the expansion of the electric-vehicle market and clean-energy production has served as a catalyst for the lithium-ion battery industry energized by the fact that the global lithium supply will need to increase fourfold in the next ten years to keep pace.

Yet, the U.S. is strategically behind in the domestic manufacturing of lithium-ion batteries and supply chain security from the beginning to end of battery life cycle, according to a recent report compiled by the U.S. Energy Department’s Consortium for Advanced Batteries.

In March 2022, the Center for Business and Economic Research at the University of Nevada – Las Vegas published a The Lithium-Ion Economy white paper which forecasts a fivefold increase in the global lithium-ion battery market through 2030, from$21.95 billion in 2020 to $115 billion by 2030.

“When the Panasonic Corporation agreed to partner with the electric auto manufacturer, Tesla, at the Tahoe-RenoIndustrial Center in 2015, the electric automobile industry was changed almost overnight,” the paper states.

“The size of the facility, called a ‘Gigafactory,’ and advanced production and scaling techniques allowed Panasonic and Tesla to lower the per-unit cost of each battery cell while packing cells in more efficient ways that allowed for more electricity storage.”

The partnership “brought the per-unit price of electric vehicles down and increased their ability to compete with traditional gasoline-powered automobiles…and Nevada brings many other assets to the table when it comes to the lithium-ion battery economy beyond just the Tesla Gigafactory. These additional assets include the mining of lithium-ion and other rare earth minerals in and near our state boundaries…”

Nevada, the paper wrote, “is the only U.S. state that encompasses every facet of the lithium-ion battery economy and life cycle, from the mining of natural lithium deposits to the research and development to production and assembly, and finally to recycling operations.”

The state, it concluded, “is home to at least 15 companies in the Lithium battery economy, including battery recycling companies such as Redwood Materials. Firms like Redwood, Tesla, and Panasonic are all located in northern Nevada and have given rise to an innovation cluster.”

Lithium-ion based batteries are expected to be the leading technology in the market with the main demand coming from automotive industry tech startups such as Tesla, Rivian, and Lucid, as well as older, established automakers such as Ford, GM, Volkswagen, and Stellantis.

Digging Into the Future

Nevada is continuing to attract attention as a source of the raw materials needed to produce the batteries needed to power the ongoing surge in EV demand.

Three leading firms in the field—Ioneer, Lithium Americas, and Redwood Materials—are in the process of enhancing their operations in the state, home to the largest deposits of lithium in the country.

“Following the completion of our definitive feasibility study, one of the main things we’ve been concentrating on is making sure we place the lithium we produce into the U.S. domestic supply chain,” says Bernard Rowe, Managing Director, Ioneer USA.

“To that end, we’ve secured a binding off-take agreement with Ford Motor Company where we will supply them with 7,000 tons per year of refined lithium carbonate to be used in batteries for electric vehicles manufactured in the U.S.”

Simply put, he adds, “this strategic relationship means Nevada lithium for American cars, and it will lead to job creation across all levels of the electric vehicle supply chain…The agreement with Ford is significant as it represents approximately 34 percent of annual output in the first 5 years of production. “We are equally excited to have announced similar binding off-take agreements with EcoPro Innovation and Prime Planet Energy & Solutions, a joint venture between Toyota Motor Corp. and Panasonic Corp.”

With an expected two-year construction phase, the company’s Rhyolite Ridge Lithium-Boron project, says Rowe, “Our primary focus is bringing the initial volumes [approximately 20,000 tons] into production in a timely fashion because our offtake partners have emphasized the need for a domestic supply of refined lithium as soon as possible. We acknowledge that we have a large resource base that lends itself to expansion in the future.” 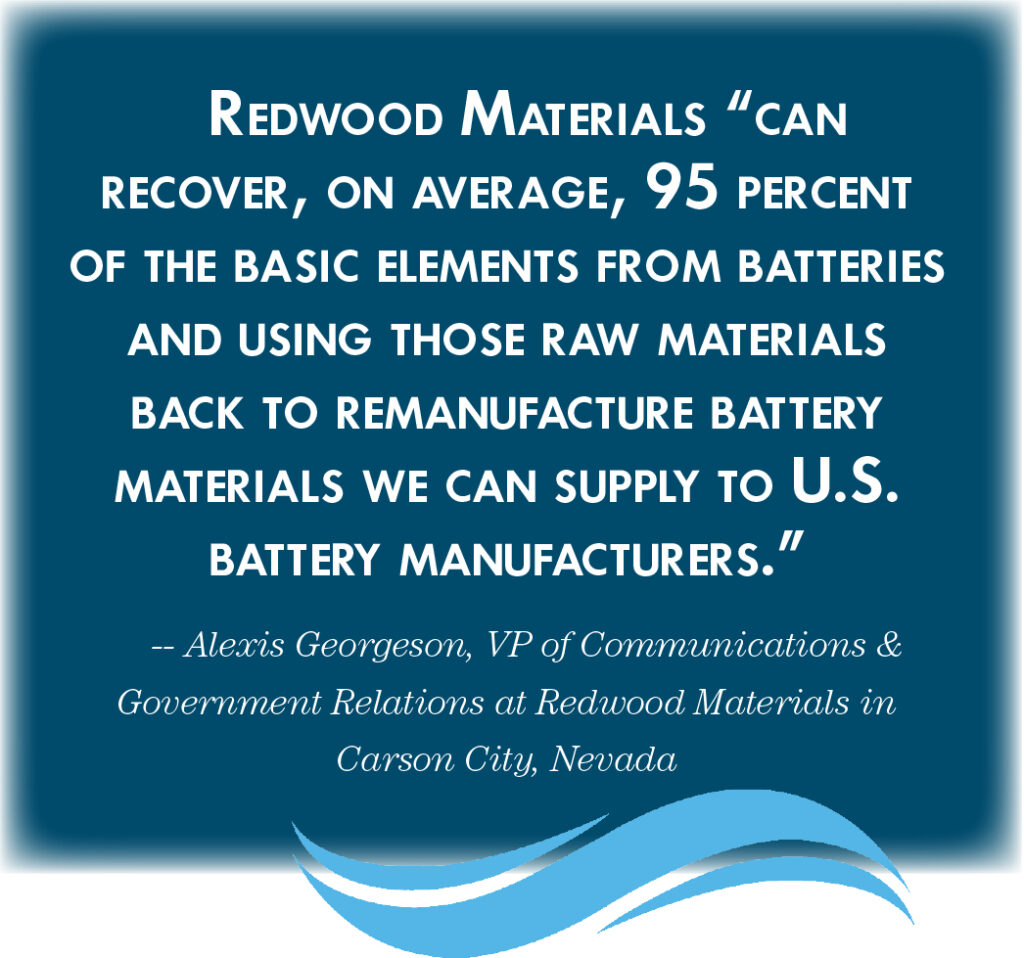 The company, says Rowe, “will collaborate with each company to the strengthen the domestic battery supply chain from critical materials to next generation lithium technologies, creating jobs across Nevada in both rural and urban areas.”

Lithium Americas has, over the past two years, operated a small research lab in Reno that ran thousands of small-scale ore processing tests that have allowed the company to increase its projected lithium recovery by roughly 30 percent without using additional energy or water.

“Based on research success to date, we’re now moving to a larger testing facility in Reno to expand our lab to include manufacturing of lithium chemicals,” says Tim Crowley, Vice President of Government & Community Affairs. “This new 30,000 square-foot Technology Center will help ensure that we’re continually improving our process, utilizing resources more efficiently, and driving innovation in the lithium-ion battery industry.”

The company’s Thacker Pass mining project is located in the McDermitt Caldera, approximately 60 miles north-northwest of Winnemucca, Nevada on public lands administered by the U.S. Department of the Interior Bureau of Land Management.

It is, he says, “the largest and most advanced lithium project in the United States. Lithium Nevada [a subsidiary of Lithium Americas] has contracted with Sawtooth Mining, a wholly owned subsidiary of North American Mining Corporation, to excavate and handle the ore.”

The deposit at Thacker Pass is 300 to 400 feet deep, and Sawtooth will mine the ore in blocks and strips. Once one block is mined to the bottom, they will move to the next block while they begin backfilling the previously mined area.

One of the primary concerns surrounding the use of lithium-ion batteries is what becomes of them once they outlive their utility. The answer? Recycling.

It is a “win-win” that fits neatly with the Federal Consortium for Advanced Batteries’ plan to “establish a secure battery materials and technology supply chain that supports long-term U.S. economic competitiveness and equitable job creation, enables de-carbonization, advances social justice, and meets national security requirements” by the end of the decade, according to Alexis Georgeson, VP of Communications & Government Relations at Redwood Materials in Carson City, Nevada.

The battery recycling company, she says, is tripling the size of its operations in Nevada to scale up recovery of lithium and other metals for the makers of electric vehicle batteries.

“We’ve just broken ground on a bigger battery materials campus up in the Tahoe, Reno industrial center,” she says. “That facility will produce anode and cathode components for up to a million vehicles by 2025 out of recycled content. We will start producing those components later this year.”

The Carson City-headquartered company—founded in 2017 by Tesla co-founder JB Straubel—is building what it calls “a closed-loop battery ecosystem” aimed at lowering EV costs by cutting dependence on imported materials, while also reducing the environmental impact.

Redwood Materials “can recover, on average, 95 percent of the basic elements from batteries and using those raw materials back to remanufacture battery materials we can supply to U.S. battery manufacturers,” says Georgeson.

The company has an impressive roster of partners including automakers Toyota, Volkswagen, Audi, Volvo, Ford, and EV battery maker Panasonic Holdings Corp., which will use recycled copper foils produced by Redwood Materials in battery anodes manufactured at the Tesla Gigafactory in Sparks, Nevada.

“We’re creating a circular supply chain for electric vehicles and clean energy products, making them more sustainable long-term and driving down the cost for batteries,” she says. “We’re doing this by developing fully closed-loop recycling for lithium-ion batteries ahead of the hundreds of thousands of vehicles that will start coming off the road in a few years.” 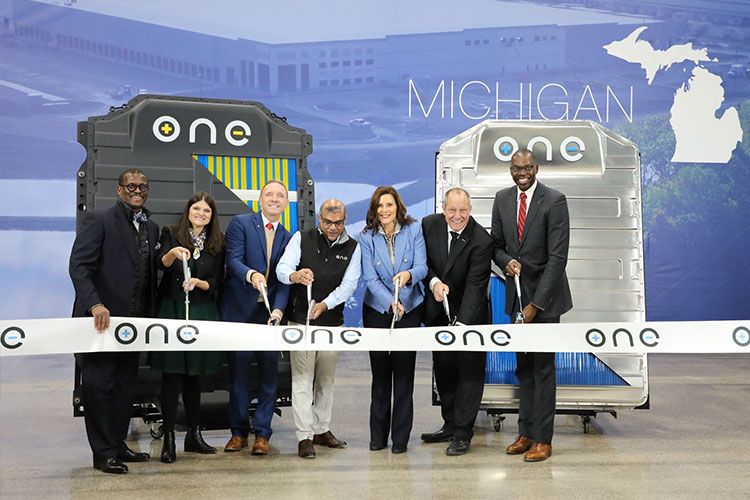 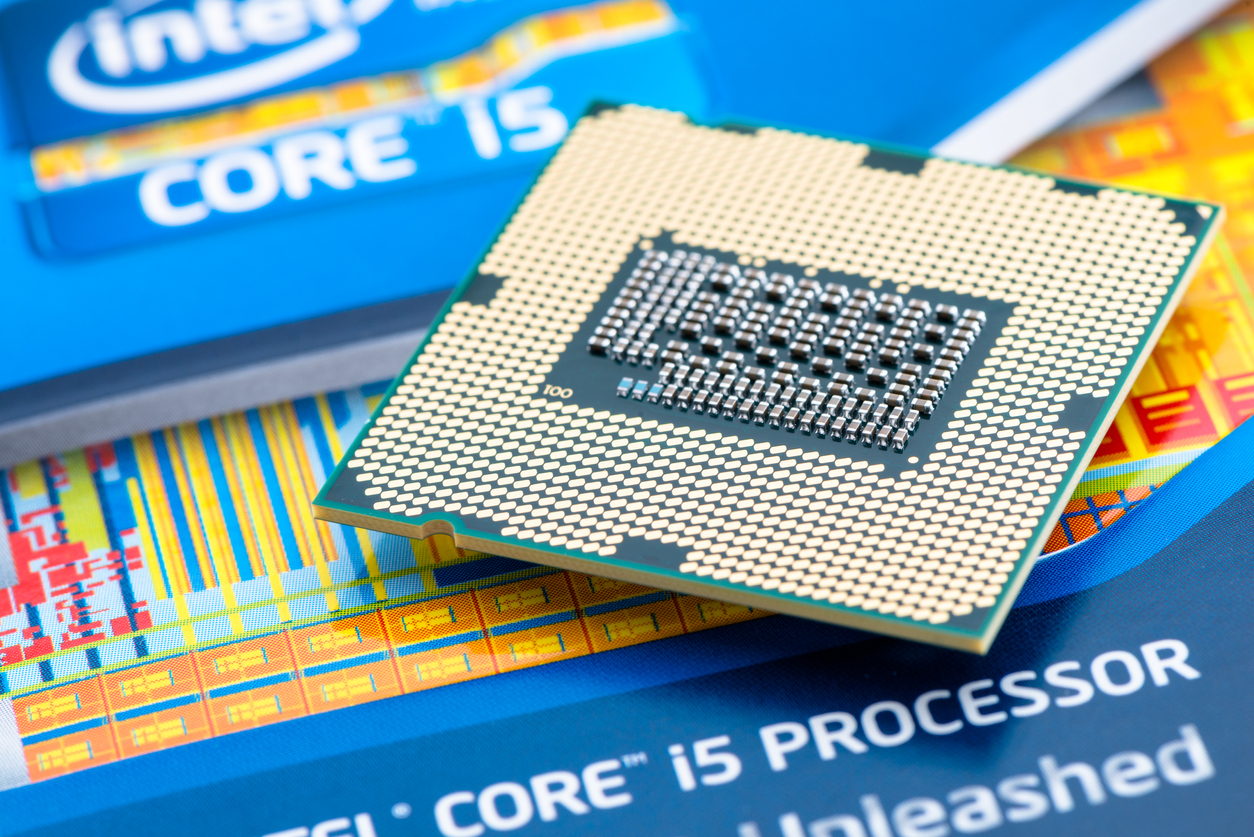 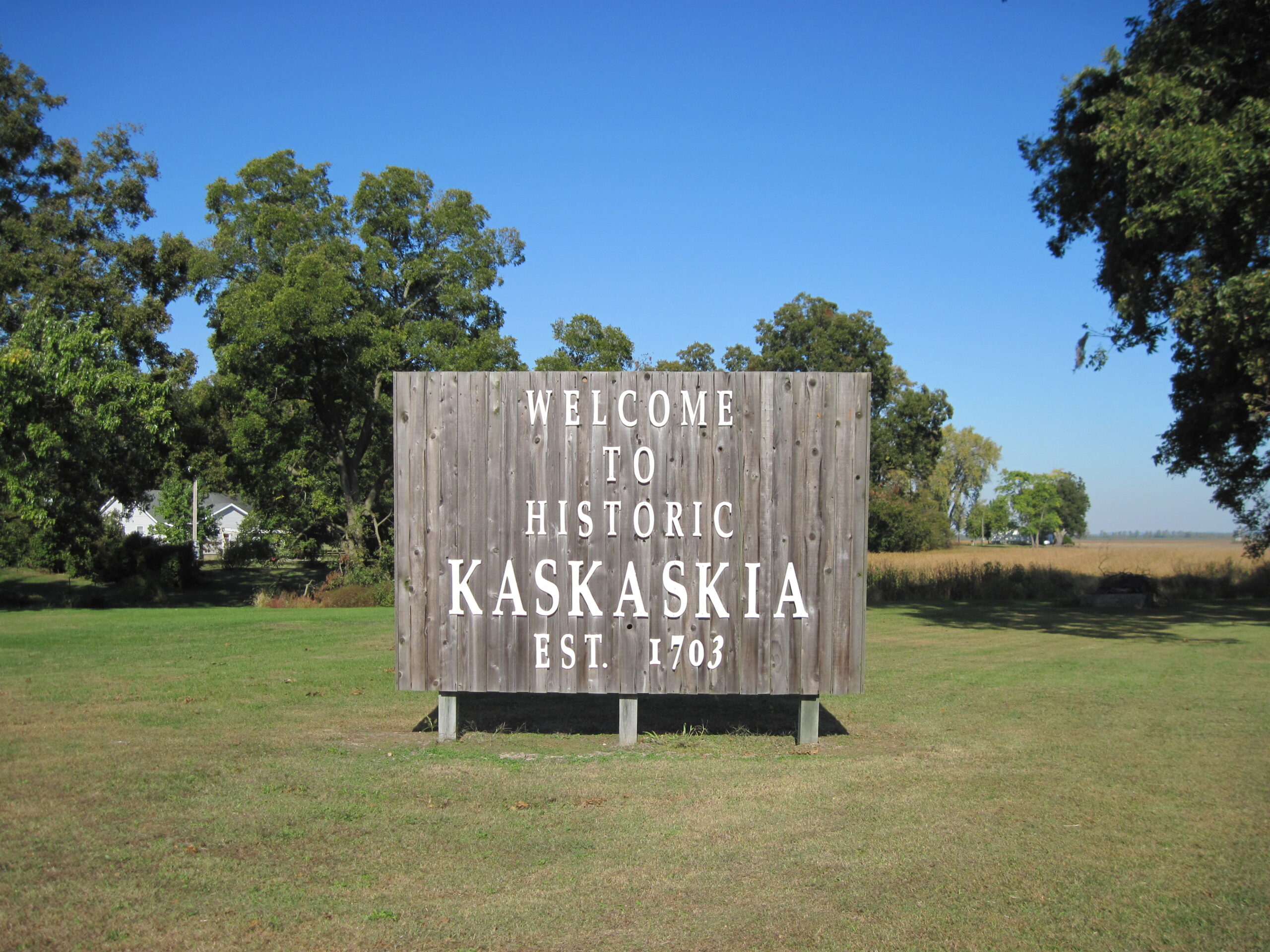