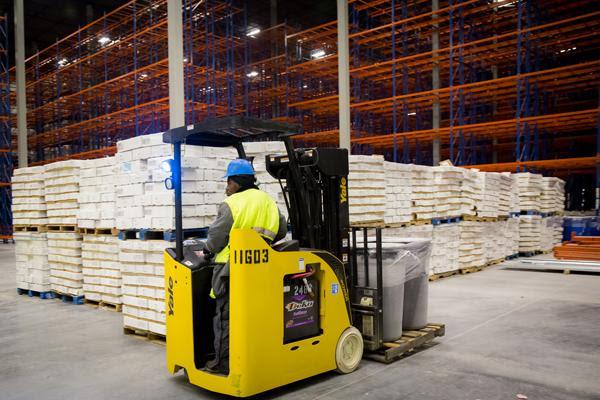 "Exactly three years ago, Nordic opened its doors here in Savannah to give our customers the logistical advantages that come with one of America's most efficient ports, combined with the superior connectivity of Interstates 95 and 16," said Don Schoenl, President and Chief Executive Officer of Nordic.

Nordic, a member of AGRO Merchants Group, LLC, opened its initial 200,000 square-foot cold storage warehouse in Savannah April 11, 2013. Nordic's Phase I facility has exported over half a million tons of frozen food since its opening.

"Nordic's expansion here is a powerful endorsement of the Port of Savannah's expertise in handling refrigerated cargo, and its ability to meet the demands of producers as well as a growing consumer market across the U.S. Southeast," said Griff Lynch, incoming executive director at the Georgia Ports Authority.

Nordic's Phase II increases employment by approximately 70 associates at its cold storage warehouse at I-95 and Jimmy Deloach Parkway, just six miles from the Port of Savannah. The site's second building can hold more than 20,000 tons of cargo at a time. Ross Maple, Director of Business Strategy for Nordic, said the added space will bring the company's total Savannah capacity to almost 50,000 tons of cargo.

"To be able to offer companies access to the world via our ports is one of our major economic development selling points as we recruit businesses to Georgia," said Georgia Department of Economic Development Commissioner Chris Carr.  "Nordic's commitment to Savannah with the expansion of their cutting-edge temperature-controlled storage facility is a testament to the impact the Port of Savannah has around the globe."

Noting outstanding service at the Port of Savannah, including fast turn times for trucks carrying refrigerated containers, Maple said Nordic is committed to growing in Savannah. "With the port's deepening project, post-Panamax ships and continued growth of the area, we are building not only for our current customers, but our future growth and new commodities as well," Maple said.

"Savannah handles 40 percent of all frozen poultry sent overseas, more than any other port in the U.S.," Lynch said. "Nordic's announcement today, along with on-terminal improvements, positions Savannah to continue serving as the export gateway for refrigerated cargo in the U.S. Southeast."

The Georgia Ports Authority's Garden City container terminal features 104 refrigerated cargo racks plus 738 plug-ins for containers on chassis. At 24 container slots per rack, it has the on-terminal ability to power a total of 3,234 chilled containers at a time.

Georgia Ports Authority
Find print-quality images of port operations here. Georgia's deepwater ports and inland barge terminals support more than 369,000 jobs throughout the state annually and contribute $20.4 billion in income, $84.1 billion in revenue and $2.3 billion in state and local taxes to Georgia's economy. The Port of Savannah handled 8 percent of the U.S. containerized cargo volume and 11 percent of all U.S. containerized exports in CY2014.

November 30, 2020
~ GPA Sets all-time records for containers, cars ~ Savannah, GA — On the heels of achieving its busiest month on record for both container trade...