With ready access to a huge percentage of the nation’s population, Ohio is perfectly situated in the very heart of the U.S. and boasts an integrated network of regional economic development partners that have been hugely successful in attracting businesses from established global giants to small start-up entrepreneurs to the state.

Now in its 10th year, JobsOhio has far exceeded its original mandate to drive job creation and new capital investment in Ohio through business attraction, retention and expansion.

Over the past decade, JobsOhio has built strategies around the “targeted” industries that drive the state’s diverse economy and represent one-third of Ohio’s gross state product, nearly one-fourth of its employment, and 40 percent of its annual payroll.

Since JobsOhio was founded, those sectors increased in size by more than 14 percent in 2021, and “we are on the front end of having the best year that we’ve ever had for several projects, job creation, and new payrolls generated,” says JobsOhio President and CEO, J. P. Nauseef.

COVID-19 presented “unprecedented challenges,” he says. “We recognized a generational opportunity to assist corporations on-shoring and re-shoring their operations and supply chains to attract businesses and entrepreneurs fleeing the coasts in search of not only a better business climate but a better life for themselves and their employees. We deliver support and resources with a local touch.”

Over five years, JobsOhio has boosted its investment loans and grants from $150 million to $500 million annually and has launched a $250 million initiative to make sure Ohio has a diverse portfolio of job-ready sites that fit the needs of the marketplace; while, since 2019, the agency has invested $530 million statewide across more than 900 projects, a 55 percent increase from the previous two-and-a-half-year period.

Says Nauseef, “The rest of the country and the world are starting to recognize that Ohio has a unique value proposition. So many, that we believe we are on the front end of a generational opportunity.”

Greater Columbus has the 32nd largest economy in the U.S. and the second-largest in Ohio, with economic activity of $137.3 billion.

And they’re based on the strengths that we have in our market. So they have a very strong ecommerce fulfillment cluster, in our marketplace,” says Matthew McCollister, senior vice president of economic development at One Columbus. “We have very sophisticated data centers and we’re very strong in manufacturing, specifically in support of Honda’s automotive supply chain. We also have a very strong financial tech and insurance tech cluster here that we’re proactively growing.”

One particular sector of strength, he adds, is Columbus’ strategic position as a regional and national logistics hub.

According to One Columbus, the regional economic development group, almost 84,000 central Ohio workers are employed in the logistics industry, getting items from planes, trains, and trucks to businesses and consumers, often with a layover in a warehouse.

Central Ohio has long been a distribution hub. With nearly 270 million square feet of logistical and industrial space, the region is the 11th largest distribution center in the U.S., according to commercial developer Cushman & Wakefield.

The past few years have dramatically accelerated that growth with warehouses and distribution centers, typically ranging from 200,000 to more than one million square feet and standing 40 feet high, cropping up throughout the Columbus area.

Much of the construction has been around Rickenbacker International Airport near Lockbourne, which remains the hub of central Ohio’s logistics industry. But warehouses are rising throughout central Ohio, especially in industrial parks in Etna Township in Licking County and West Jefferson in Madison County.

Last April, Ukraine-based Antonov Airlines carried 80 tons of automotive parts from Asia to the United States of America. The flight picked up parts in two Asian locations before the An-124, one of the largest transport aircraft in the world, flew the cargo to Rickenbacker on a four-day journey from Indonesia via Malaysia, Vietnam, Japan, and Anchorage, Alaska.

The auto parts comprised priority parts shipments needed for just-in-time production lines at auto manufacturing facilities throughout the region and were undertaken to support the increasing demand for car parts as vehicle manufacturers across the U.S. reopen following the COVID-19 pandemic, according to the air carrier.

“A lot of what we do to attract businesses is simply just be prepared for the opportunities that come our way,” says GLC Executive Director, Alexis Fitzsimmons. “We make sure that our infrastructure is where it needs to be and available at sites in the County that are available for development and that we’re ready to have the conversations with prospective developers.”

The biotechnology company Amgen recently broke ground at a new $365 million, 270,000-square-foot pharmaceutical packaging facility in New Albany that will employ 400 workers and house its most advanced assembly and final product packaging capabilities for medicines slated for distribution in the U.S.

When completed, the new plant in the New Albany International Business Park will cover 177 acres, 130 of which are in Licking County with the remainder in neighboring Franklin County.

Amgen Senior Vice President of Manufacturing Arleen Paulino said the company chose New Albany for its factory because of access to talented workers, “favorable operating costs,” a centralized location for logistics, and “the vibrant business climate. We look forward to building strong connections with the New Albany community.”

GROW Licking County “takes very strategic incentive positions, so we don’t necessarily throw every incentive that we have at a project,” says Fitzsimmons. “We work hard to try to identify and understand the project’s specific needs and where the gaps are that need to be filled so that the incentives that we offer are on target and are more than equal to the project’s requirements.”

In 2020, 439 million pounds of cargo moved through Wilmington Air Park in Ohio. That makes it the third-largest, cargo-focused airport in the U.S., according to a report based on U.S. Department of Transportation (USDOT) data government data recently compiled by researchers at DePaul University.

While the USDOT named the Air Park Ohio’s highest volume cargo airport, Wilmington is still relatively small compared to many other airports. Its 2019 cargo volume was less than 0.5 percent the size of Memphis International Airport, Federal Express’ home base, and the largest cargo hub in the U.S.

But, Wilmington’s impact on Ohio’s economic profile is huge as its cargo volume ballooned by an eyebrow-raising 289 percent (YoY) in 2020, according to the DePaul report. 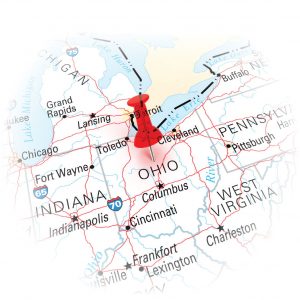 The 1,900-acre property with 2.8 million-square-feet covered floor space, is strategically positioned on the site of the deactivated Clinton County Air Force Base. Its location allows airlines to reach 60 to 70 percent of the U.S. population with an hour-long flight.

This happened at a time when “the surge in at-home delivery has pushed supply chains to the max,” says Port Authority Executive Director Dan Evers, adding the Port – which serves as the economic development agency for Clinton County – is cultivating both build-to-suit and speculative industrial or distribution space that developers might build either at the Air Park or on adjacent property.

Only 150,000 square feet remain open for lease, says Evers. “At the moment, we have multiple prospects looking at that facility and the possibility of leasing space, either in its entirety or as a multi-tenant facility.”

Thirty percent of the space already leased is occupied by online retail giant Amazon. The Wilmington Air Park “is where the company did its proof of concept,” says Evers. “As a result, Amazon became familiar with the airport – with its capacities, its location, and the advantages of setting up here, and the result has been a tremendous boost to the regional and state economy.”

The Cincinnati region, with $152.7 billion in economic activity in 2020, has the largest metro economy in the state.

Last year, the region’s economic development efforts were successful in “marketing the Cincinnati Innovation District as a prime location for businesses to recruit talent and develop their next idea, while establishing new centers of excellence centered around the bio-health industry and logistics technology,” says REDI Cincinnati’s President and CEO Kimm Lauterbach.

On the logistics side, the Ports of Cincinnati & Northern Kentucky is an inland port complex that covers 226.5 miles of commercially navigable waterways on the Ohio and Licking Rivers. The port is comprised of more than 70 active terminals that, according to the most recent figures, handled 48 million tons of cargo in 2019 and ranks as one of the largest and busiest inland ports in the U.S.

In August 2021, Amazon has significantly increased its operations at the Cincinnati/Northern Kentucky International Airport (CVG). The ecommerce giant has opened an 800,000-square-foot sorting facility there, turning CVG into the central hub for Amazon Air’s U.S. cargo network.

The hub is the largest of the 40 such facilities operating in the U.S. and is designed to accommodate 100 Amazon-branded freighters and an estimated 200 flights per day.

In addition to Amazon, the Global Superhub handles cargo flown in by eight other cargo airlines including DHL Express and FedEx, which all combined in 2020 to rank the airport as the seventh-largest cargo airport in the U.S.

“We move at the speed of business and encompass a huge region with unlimited advantages for any company interested in doing business in Ohio,” says RGP Northwest Ohio Chief Marketing Officer, John Gibney

“We’re not automatically going to drive your project into Toledo, for example. We’ll work with you to steer you to the location across Northwest Ohio that best fits what you need to advance your business. So if you need a 100,000-square-foot building near a rail line that’s within five miles of a major interstate, we’ll be looking across the entire Northwest Ohio region and we’ll find you exactly what you’re looking for.”

The approach is working. For example, in February 2021, Michigan-based Trucent Renewable Chemicals (TRC) said it would invest more than $10 million at the company’s new site in Van Wert County.

TRC—which processes vegetable oils into renewable oleo-chemicals used in the production of machining fluids, paints, adhesives, plastics, and animal feed—said the new facility “will allow for increased production of existing products, expansion into new markets, and development of new products.”

Northwest Ohio “is the intersection of the agricultural and industrial markets, and that is a key reason we are located in this area,” said TRC Director, James Bleyer at the time. Ohio’s workforce, he added, “is highly respected and can handle the production requirements. This region has an industrial base with a workforce trained for these types of operations.”