Oregonians like to think things look different in their state, with a breathtaking public coastline, majestic mountain peaks, and world-class breweries. The same goes for Oregon’s economy with a diverse manufacturing base and significant growth in high-tech hardware, software development, food processing, and outdoor gear. In other words, they still craft things in Oregon. And far more than double lattes and pale ales.

Oregonians manufacture silicon chips with a vibrant high-tech industry anchored by Intel’s largest facility in the world. Oregon is a leader in food processing with literally tons of local berries, hazelnuts and wheat turned into countless products by Lamb Weston, Amy’s Kitchen, Diamond Foods, and hundreds of other food processing firms and shipped all across the globe. A fast-growing aerospace and Unmanned Aerial Systems industry also is rising up, with leaders such as Precision Castparts, Boeing, and Cloudcap Technologies leading the way.

While the business cost structures are very competitive, they find that such assets as Pacific Rim access, quality workforce, and enviable quality of life often make the difference. While costs are competitive, it’s quality that wins in the end. Any business can grow in Oregon, but there are some examples of why some businesses are finding success expanding in Oregon in particular industries.

It might be an apparel firm that wants to attract designers to a diverse urban environment with access to the beach, the mountains and the high desert within a couple hours’ drive. Nike’s global headquarters are in Oregon, so are Adidas America and Columbia Sportswear. The presence and growth of these global brands has allowed new ideas, new opportunities, and new companies to sprout from the large pool of industry talent that has amassed in the state.

In addition to apparel and footwear, Oregon is a place where outdoor gear gets pushed to its limits, and companies want to do business in the places their gear can be put to use. From the world-renowned kiteboarding and windsurfing in the Columbia Gorge to the slopes of Mt. Hood, the outdoor-oriented culture in Oregon draws young creative entrepreneurs who come to the state to not only enjoy the bounty of its geography, but to make a living by creating a better multi-tool to have at the ready, or a better bike to descend a mountain. Firms such as Keen, Dakine, Ruffwear, Benchmade, and LaCrosse-Danner call Oregon home.

Cutting-edge software firms like Salesforce.com, ebay, Urban Airship, Jama, and Aruba Networks are expanding in the city of Portland due to a critical mass of talented programmers, designers, and suppliers paired with a compelling quality of life delivered at a much lower cost than competing metro locations outside the state. Software is one of the fastest-growing industry groups in Oregon, with more than 50 percent employment growth over the past 10 years.

It may be a data center that needs dependable, affordable power in a low-humidity environment with a property tax abatement and attraction of no sales tax for the tens of millions of dollars’ worth of equipment they plan to purchase. That was what helped seal the deal for Facebook’s first company-built data centers now located in Central Oregon as well as Google, Amazon, and Apple, all of which have major data centers in the state.

Oregon is a pretty incredible place to live, as well as grow your business. Oregon’s diverse landscape, people, and culture has something for everyone, whether it’s the state’s dramatic coastline with rugged beaches, snow-capped mountain peaks, pristine farmland, vibrant urban communities, or high desert landscapes rivaling those of the American southwest.

Oregon’s natural beauty, outdoor sports, thriving culture, cuisine, food products, beer, wine, all add up to a thriving place to work and play. And they work to keep it that way. Oregonians have always put great value on the long-term health of the environment in which they live. Oregon had the foresight to set up a renewable energy-friendly environment several decades ago, ahead of much of the U.S. Oregon’s wind farms put the state into the top five for wind energy production and the state is home to one of the largest wind farms in the world, Shepherds Flat. Wind, solar, wave, biomass, and geothermal energy development is all happening in Oregon, in addition to green building design, environmental monitoring technology, smart cities, and e-mobility technology adoption.

A state of ‘firsts’:

Oregon’s global reach is exemplified in its strong high technology industry, with Intel driving large exports as well as companies like Flir Systems, FEI, and Mentor Graphics. While high-tech industries account for nearly half of Oregon’s exports, other industries shine as well. Oregon is a major exporter of machinery, wood products, agricultural products, transportation equipment, and sports apparel.

These firms in Oregon enjoy one of the top five lowest effective business tax rates in the country according to Ernst & Young nationwide studies for the Center On State Taxation. Oregon has no sales tax, and corporations that operate in Oregon but sell goods in other states pay corporate income taxes based solely on company sales within the state of Oregon. Electricity is also affordable, with a very stable, dependable supply. Due to Oregon’s ability to harness hydropower, Oregon’s energy costs are among the lowest industrial rates in the U.S., averaging about six cents per kilowatt hour (kWh). This is approximately half of the average industrial rate available in California. Oregon also has several programs that exempt new business investment from property taxes, normally for three to five years but for periods up to fifteen years in rural areas. Savings can be significant in exchange for business capital investment and job creation in Oregon.

Companies wishing to take a look at Oregon can reach out to Business Oregon, the state’s economic development agency. The agency works with both communities and businesses, with programs and expertise to help businesses grow, so they can in turn add jobs, diversify the economy, and increase Oregon prosperity. The agency’s work with communities is focused on enhancing infrastructure with projects such as water/wastewater systems, seismic rehabilitation for schools, or rural broadband development. The group also houses the state’s arts commission.

So whether it’s semiconductors, software code, sportswear, or craft beer at Oregon’s 250 breweries, the creative people across the state’s diverse industries have a passion to craft and do great things in Oregon. 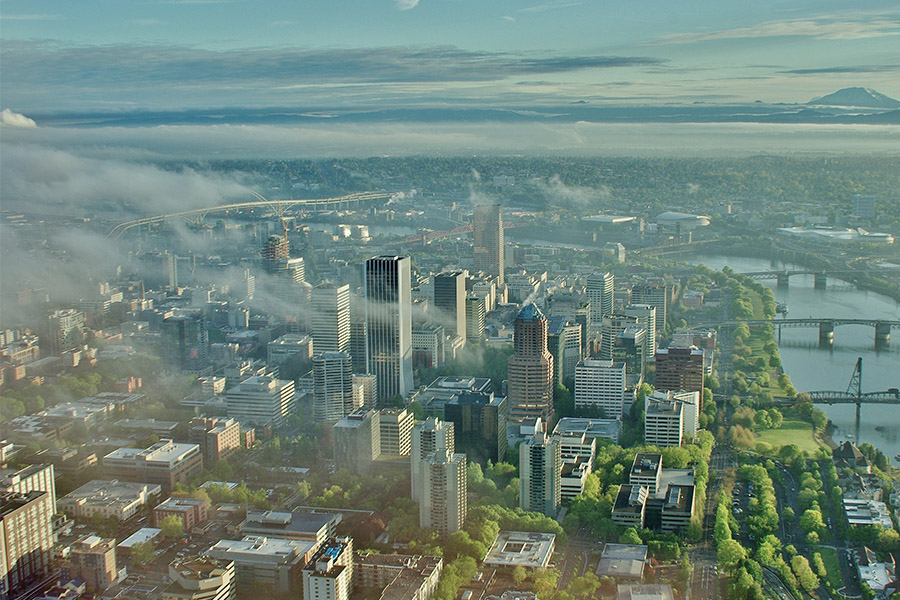 Resiliency and Prosperity in Oregon

October 1, 2020
We’re going to tell you a little about Oregon. Oregon is where possibility is still a real possibility. Where it’s still possible to turn ideas in...