When analyzing the science and technology park market, know that while demand is steady and high. But also know that there are areas where heightened entrepreneurial spirit, accompanied by loads of venture capital and strong government investment could lead to eye-popping results.

To start off with the good news, Bob Hess, vice chairman, consulting for the Chicago office of Newmark, is that the site selection business “is robust right now” and that the science and tech sector is notable among the most active.

While part of the sector’s success is its deeply-rooted connection to academia and the inherent opportunities for tech transfer, Hess feels that a keener focus in that market would boost its high profile even more.

“Academics are typically not the most aggressive marketers in the world,” he said. “They need to let people know that they have these tremendous assets. That’s what happened in Huntsville, Alabama for example, where the state government and economic development professionals have heightened integration with the private sector – and work with entrepreneurs to grow startups into thriving businesses.”

But notable in this active industry is the dearth of wet lab space, which averages $200 per square foot nationally to build and equip, and can exceed $500 in some markets. When it’s available, it’s not available for long.

“If a developer makes a speculative investment in that type of space,” Hess said, “it’s highly likely that potential occupiers will show up to make an assessment and add that location on the short list.”

What’s in demand today “are life sciences, including therapeutics, biologics, diagnostics, cell and gene therapy, and everything in innovation and health services attached to COVID-19 and other immunology efforts,” he said, also pointing out “the need for public-private partnerships to bring products that have been approved by the FDA to market more expediently.”

Also, developers need to “get in front of this current explosion of life sciences and related industries,” Hess said.

“[Newmark] decided to develop a dedicated practice in this space because the long-term demand is there. The opportunity is great for colleges and universities that have 50-100 acres available for development to build more science and tech space, which typically by necessity has great infrastructure,” he said, “but you can’t take an academic approach to marketing these sites. You have to think like a developer and be aggressive.”

“These biosciences-related companies don’t have the money to support very expensive wet lab space or even dry lab space and we need more of it to support small companies,” he said. “Even major pharma companies often lease temporary wet lab space outside of their campuses when their own space is fully utilized.”

He pointed to successful examples of that approach at the science and tech park at TMC Houston-Texas Medical Center, which includes 85,000 square feet of mostly wet lab space for those startups and small concerns that can end up being a big deal. “The first few years, it was a struggle to attract tenants,” he said, “but the space is now leased and it needs to be expanded.”

Angelou also pointed to the success of the SciTech Center at George Mason University’s Innovation Center (see below), which is located in Northern Virginia. 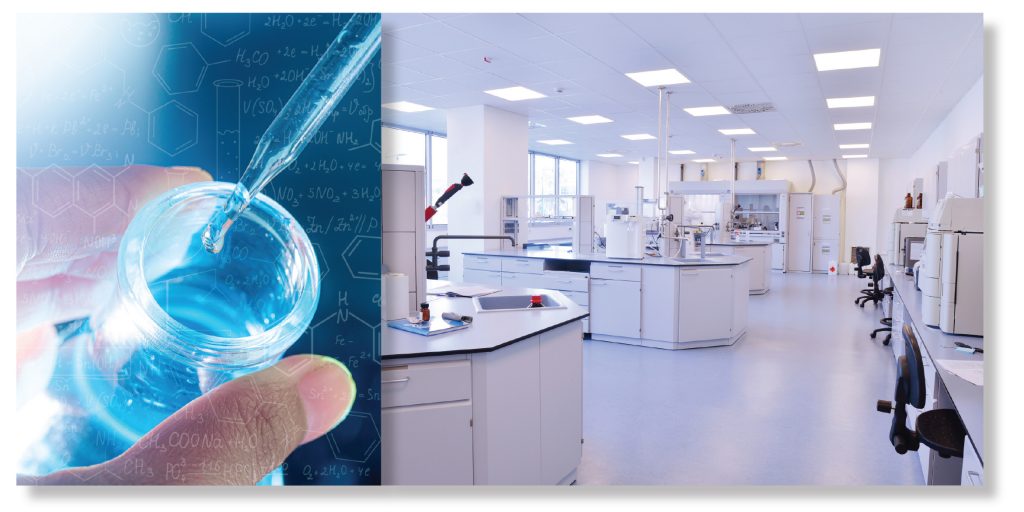 Addressing innovation is part of President Joe Biden’s $2 trillion infrastructure plan, and Brian Darmody, executive director of the College Park, Maryland-based Association of University Research Parks likes the trickle-down possibilities that many come to the market.

“Part of Biden’s approach is to invest money in the National Science Foundation to create 10 regional tech hubs across the country,” said Darmody. They, in turn, “would invest money into incubators, and other facilities targeting technologies including quantum computing, biotechnology, advanced manufacturing and other sectors.”

This new funding, Darmody said, may help construct more of that badly needed wet lab space, though “some office buildings have been repurposed into science and tech wet lab space. Re-purposing existing facilities into bio and tech space makes getting to permit easier than building a new building, too.”

With such opportunities available, that needs to happen more often. “While many biotech innovations are happening anyway,” he said, and like Hess thinks “there need to be ways to advance new technology and products and bring them to market.”

Darmody also pointed to the Endless Frontier Act which could provide another boost in the science and tech park arena. “That [legislation] has many people in the innovation space excited,” said Darmody of the bill, which is sponsored by Senators Chuck Schumer of New York and Todd Young from Indiana, and others. “It’s getting more interest since it ties into Biden’s infrastructure bill.”

“Some combination of this legislation with the Biden infrastructure bill will hopefully pass this year,” he said, “and our members would be the beneficiaries. As it rolls out, some of these ten $2 billion hubs are going to be spreading the money via clusters in different disciplines – with cybersecurity, advanced manufacturing, biotech and quantum computing the four big ones – with some funding also directed to Historically Black Colleges and Universities (HBCUs).”

Whatever form of the legislation passes, Darmody said it will also increase broadband access in rural areas. “Some of our members have facilities outside of major metropolitan areas that need better connection. People need to understand that not all tech areas are Silicon Valley.” 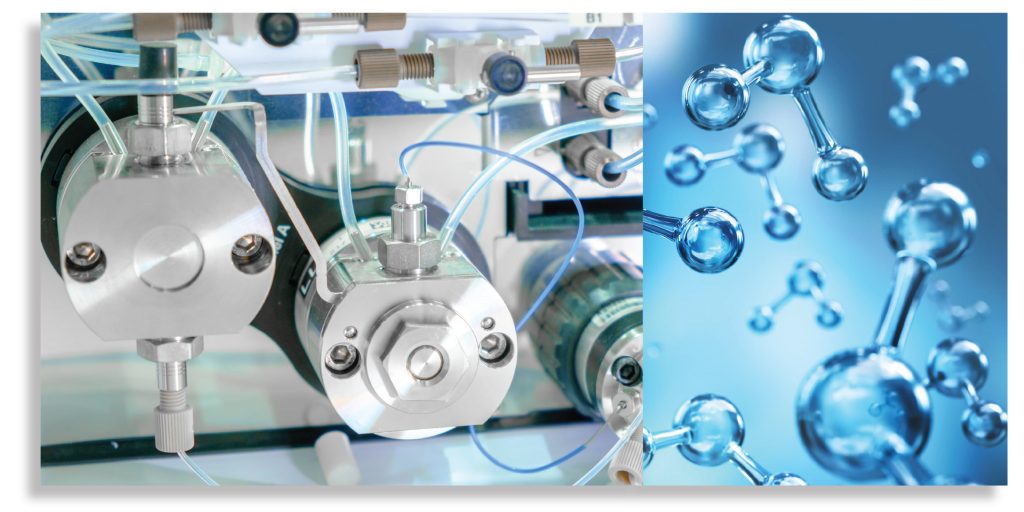 While those plans sound exciting, “The operative word today,” when it comes to wet lab space in science and tech parks, said Rick Weddle, former president of the International Association of Science Parks and Areas of Innovation (IASP), is still “availability. Historically, there’s not much wet lab space available and [the issue] has been exacerbated by the COVID-19 pandemic.”

That dearth in the base market for available buildings, combined with the demands of realigned supply chains, makes the lack of product in the wet lab sector “seem even more pronounced,” said Weddle, who ran the Research Triangle Park (RTP) in North Carolina for seven years, before being elected to lead the IASP in 2012. “Around the world, we’re seeing developments with all of the characteristics of science and tech parks that are not necessarily real estate-based. At 22@Barcelona, for instance, there are many areas and spaces that function under the ‘area of innovation’ umbrella that serves to create an innovation ecosystem, as opposed to a dedicated space.”

What working in the science and tech sector comes down to now, he said, “is understanding the talent pools.

“This isn’t just about the Ph.D.s who wear the lab coats, but the technicians and workers with associate and bachelor’s degrees who have bench chemistry experience,” Weddle said. “Go to any factory today and check out the number of mid-level workers. How many Ph.D.s are there among 300 employees? Not many. Most people who work in a research facility or research hospital and/or facility are not doctors.”

“For instance, when RTP became famous, more developers built science parks,” Weddle said, “but its success was copied frequently, but rarely duplicated. Developers could see the physical property and buildings, but the secret sauce was the connectivity of the different entities within the government, academia and industry with the park’s innovation ecosystem. It’s a collaborative effort.”

For proof, look no farther than Silicon Valley. “It’s not a park, it’s the sum of all of the input from research and development, venture capital, the labor pool,” etc., he said. “Some people say that what’s so great about it isn’t the physical presence, it’s about how they create companies based on these synergies. Ecosystems support the formation of innovative companies of scale.

“What it’s about,” said Weddle, “is understanding the organic systems approach to thinking. Innovation is about chance encounters.” 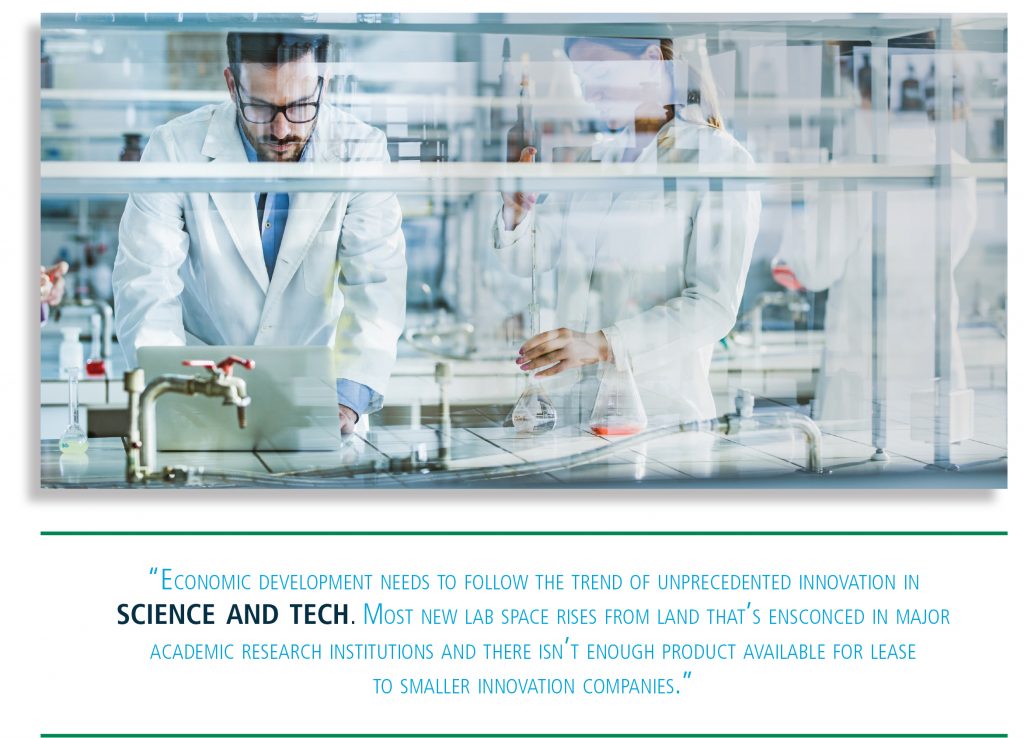 That was the train of thought more than 20 years ago in Prince William County, Virginia, when ground was broken on the 1,500-acre Innovation Park in what was a rural area near Manassas, Virginia, on the edge of the lucrative Northern Virginia market. The county purchased the land and was in control of selling it and developing the park’s infrastructure; the result is Innovation Park, which was built around George Mason University’s (GMU) Science and Technology campus.

The SciTech Campus has grown to 4,000 graduate and undergraduate students with a focus on life science research, information technology and mechanical engineering. GMU is now working on establishing a medical school in the park and will open a new 130,000-square-foot Life Science and Engineering Lab building. The opening is slated for 2024.

Only 130 acres are still available for development at Innovation Park, which is now a key cog in a blossoming ecosystem. Prince William County Department of Economic Development Executive Director Christina Winn is optimistic about more progress in the coming months. “There are six companies considering some of the remaining acreage for their 20,000-square-foot to 120,000 square foot projects,” she said. “We’re hoping to have an announcement by fall.”

The reason for Winn’s optimism is “a 200 percent increase in demand” over recent years from companies that need space now – including some current tenants. “Several years ago, the county opened a life science accelerator in the park,” she said, “and several of the businesses have graduated to their own spaces in the park.”

Access to capital is also critical in making that approach, so the county offers Ignite Grants of up to $50,000 to spur innovation by startup companies, and “about a third of applications,” Winn said, “come from life sciences companies.”

“Maryland is strong in the bioscience market with its strong federal presence. We didn’t want our new life science companies to move out,” said Winn, “so our safeguard was creating a public-private partnership to open the new wet lab space and keep those life science businesses anchored in Virginia.” 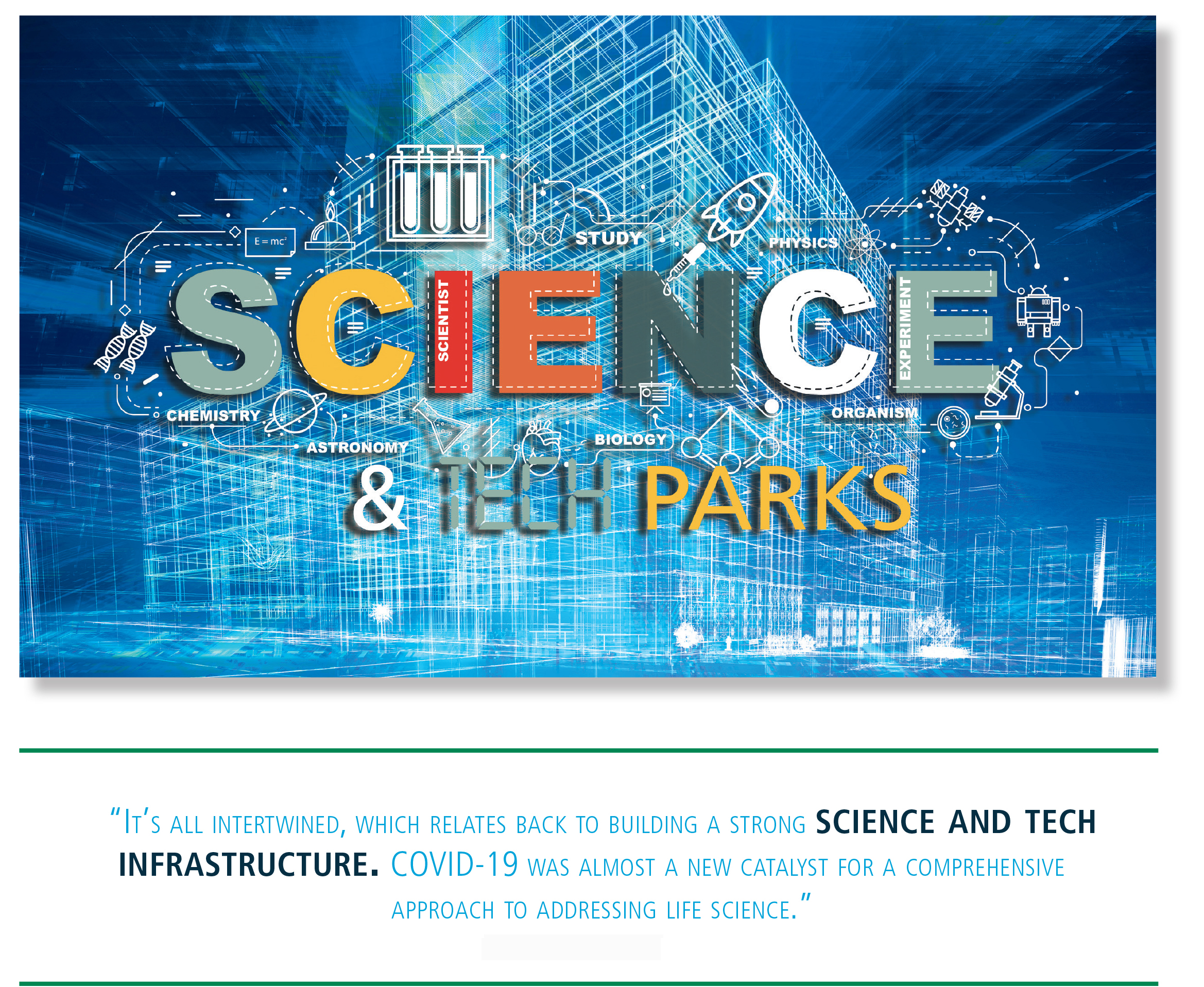 As the world attempts to finally escape the crushing shadow of the pandemic, she noted that the worldwide scourge has also created more action in the science and tech market. “Due to COVID-19,” she said, “companies that garnered patents had to lease or buy new space quickly.

“Happily, a new 108,000-square-foot building came online in the county in late 2020,” she said, “and a couple of firms graduated from our accelerator to this building and built out wet labs, complete with new HVAC, enhanced electrical, clean rooms.

In fact, Winn said that her office is working on “50-60 percent of life science projects” related to COVID-19 and noted that the findings of those projects may also be used to treat cancer, lung disease, etc.

“It’s all intertwined, which relates back to building a strong science and tech infrastructure. COVID-19 was almost a new catalyst for a comprehensive approach to addressing life science.”   Χ 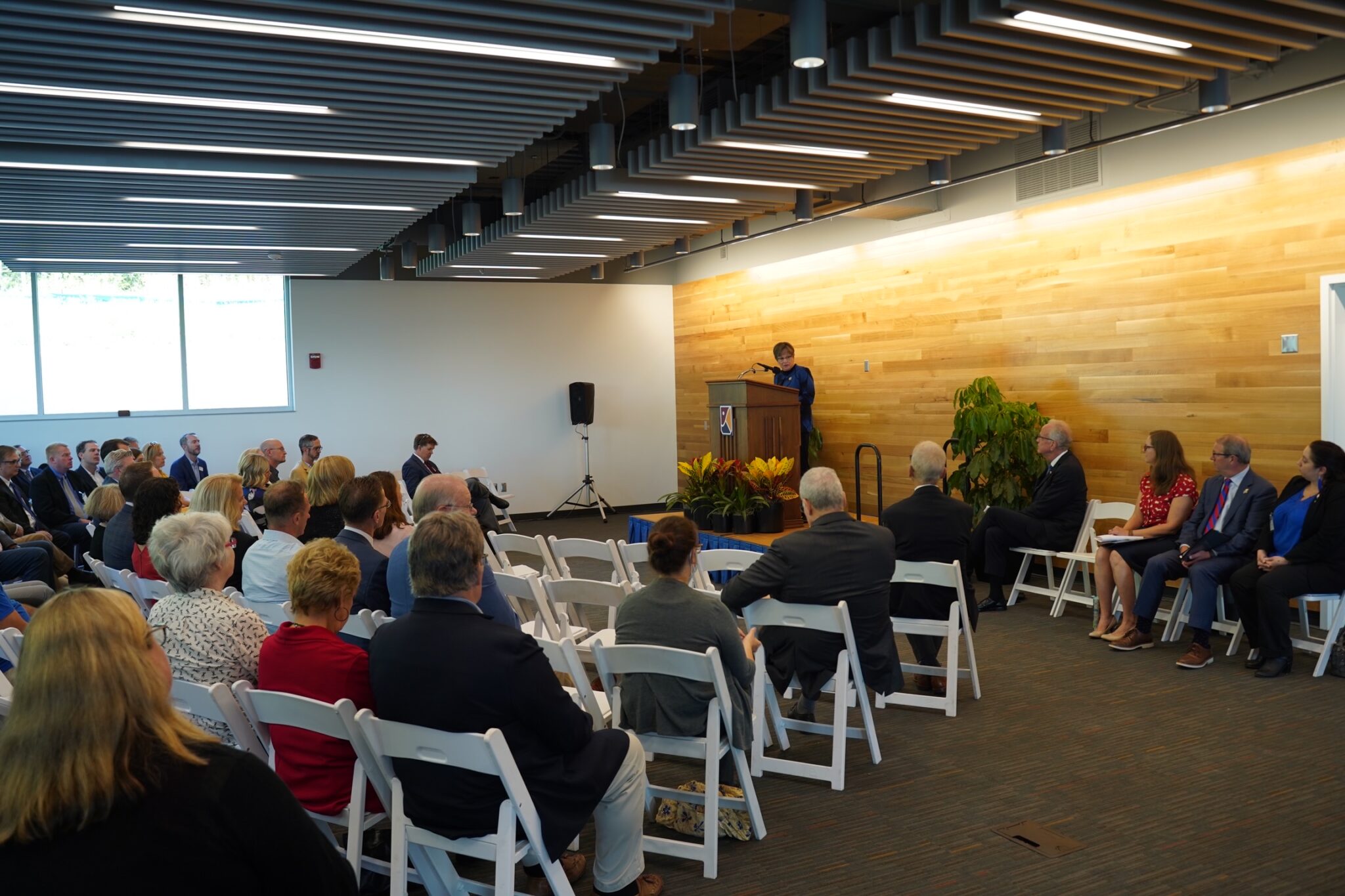 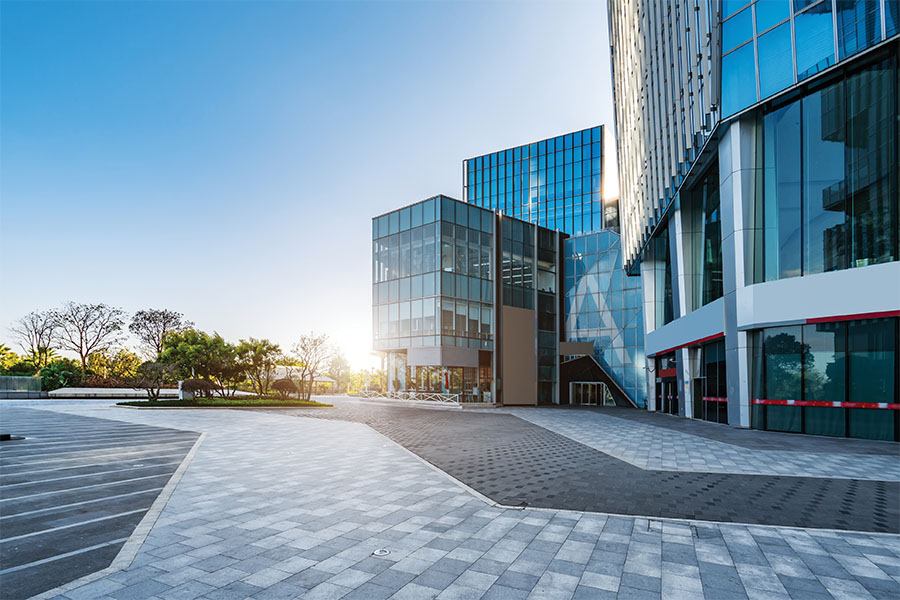 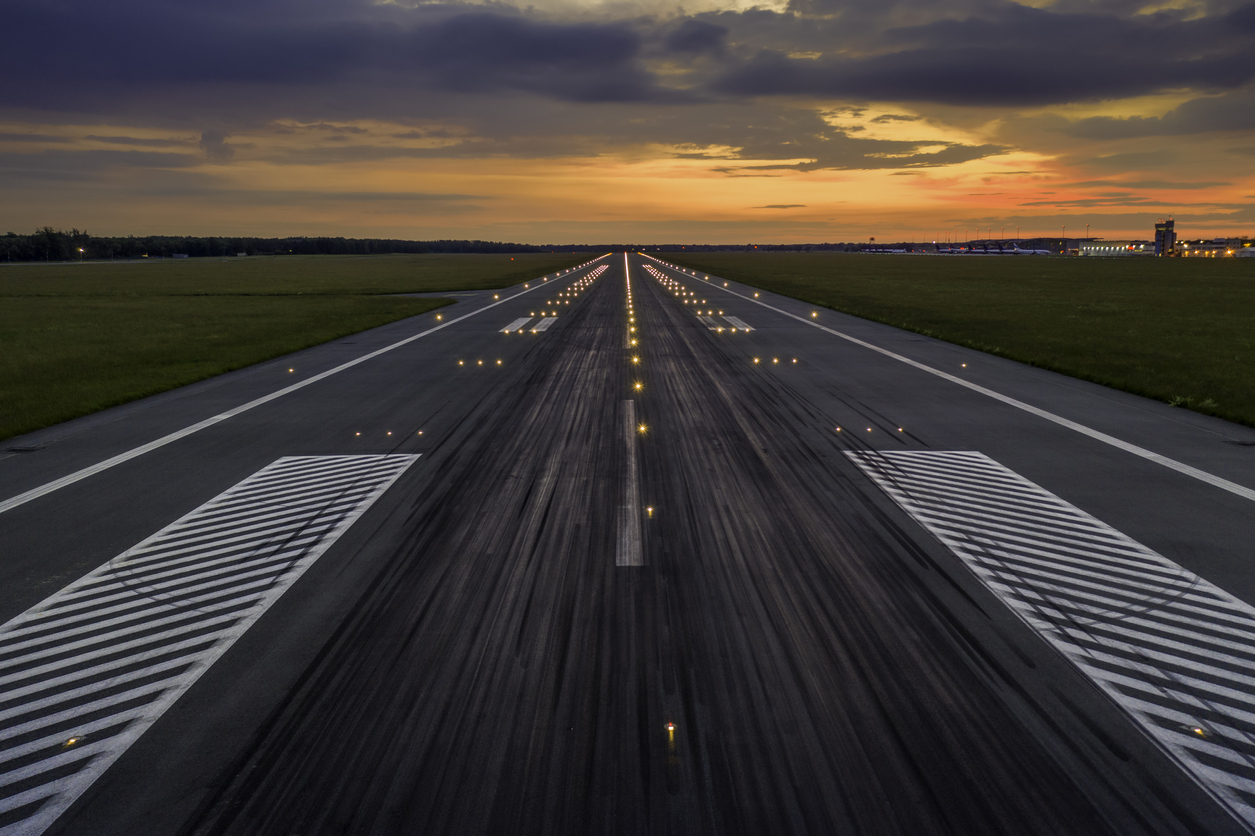 ADB SAFEGATE to Build Center of Innovation in Gahanna, Ohio