Imagine this scenario: The U.S. headquarters of an international medical device concern starts the year in growth mode and by the end of 2020 – despite the COVID-19 pandemic – adds more than 1,000 employees globally and 300 more nationwide.

Of course, that good news shows up on the company’s bottom line. At the June conclusion of its fiscal 2020, it posted nearly $580 million in revenue, up 26 percent from fiscal 2019. As a result, it’s able to heavily invest in research and development in what it estimates will be a $2.5 billion sector of the industry by 2024.

Those are the robust numbers from the U.S. headquarters of Ambu Inc., in Columbia, Maryland, a Denmark-based firm that manufactures a range of single-use endoscopes, including the new duodenoscope, which is marketed as the Ambu aScope Duodeno.

This is just one example of the progress, technically and financially, that’s ongoing in much of an industry that continues to thrive.

But while its overall health is solid, there are still areas that have been hurt during the last 10 horrendous months of 2020. However, many professionals who work in or observe its various sectors as the COVID-19 vaccine reaches the market are still optimistic for what awaits in 2021.

The broad picture of the health of the medical device market has been traditionally analyzed and defined within three classes, said Matt Szuhaj, managing director, real estate and location strategy for the San Francisco office of Deloitte Consulting: Class I is for low-margin basics, like supplies and personal protective equipment (PPE); Class II consists of one-use devices, like hypodermic needles, IV tubing, plastic bags and scalpels (and endoscopes); and Class III, which generally concerns implanted items, such as stents and heart valves, artificial joints and pins, orthopedics and trauma devices.

“But the trend,” said Szuhaj, “is the merging of these classifications. For instance, there is a stent that’s coated with a drug. So what would that be? A medical device or a pharmaceutical product? Then there are devices that monitor conditions and infuse drugs as prompted, as a diabetic might need. Is that a Class II or a Class III? They’ve become parts of systems of care.”

Today, patients can even use their phones to check for A fib, he said, as tele or remote medicine has become “very beneficial in the developed world as well as remote settings, due to the in-home health trend. Someone can used this method during in-home dialysis treatments as real time data is collected, for instance.”

These remote applications can even be facilitated through wearables, “like the Apple watch,” said Szuhaj. “These devices collect great amounts of real-time data. We’re still working on interpreting the terabytes of collected data. The trend has not reached diagnostic level yet, but its coming.”

Many of these developments were occurring pre-COVID-19. “That’s when we saw that the supply chain was becoming an issue, as it was in acquiring PPE. The issue was coordination,” Szuhaj said, “and many companies knew that we did not have heightened resiliency. That’s what we found out when COVID-19 hit.”

Diagnostic tests are another example. “They are basically medical devices that need to be accentuated by reagents (chemicals) that need to be produced at scale. They’re now ramping up production, which is a fine example of responding to the pandemic,” he said, noting the macro trend of companion diagnostics, which is the pairing with a therapy to determine an appropriate treatment. 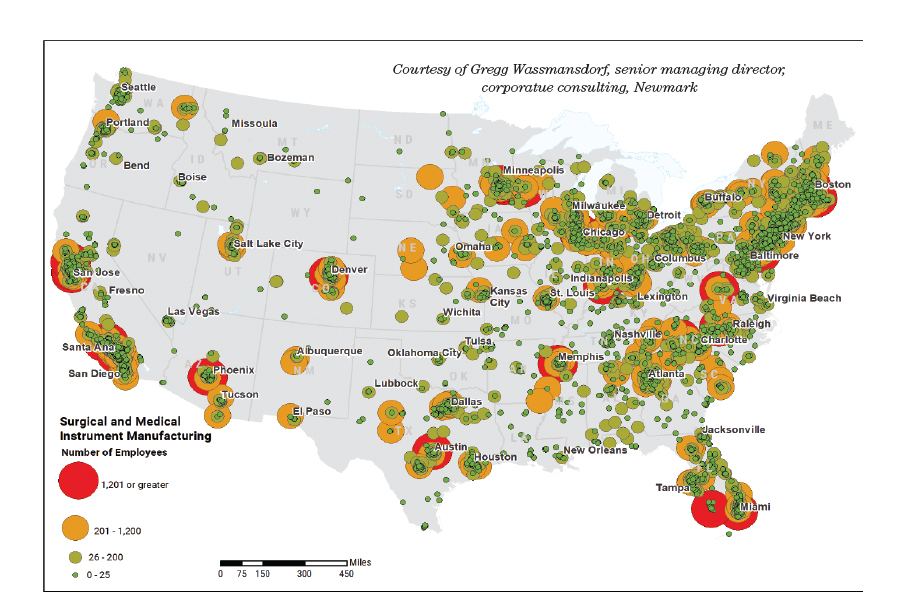 Concerning geographic locations, similar to the pharmaceutical industry, “there are certain factors to consider. First is the availability of skilled talent and how automation might apply in each company’s situation,” Szuhaj said. “Also, Class III products need favorable tax situations and a solid operating environments, though do not need to be as tied to universities and research as some people might think.”

And cost is not as key in this equation as safety. “These materials move on airplanes and are usually not very big,” he said. “It’s all about security and reliability.”

So, what other parts are part of the big picture in the medical device market?

So the overall growth trajectory looks good, but will still be varied in sectors and subsectors. “Some are stronger than others,” he said. “There is also a strong geographic angle at play, as there are numerous small clusters around the country amongst a select few very large clusters,” including the top five of Los Angeles (30,000 employees), Minneapolis (28,000), Boston (17,000), New York/New Jersey (15,000) and Chicago (13,000). 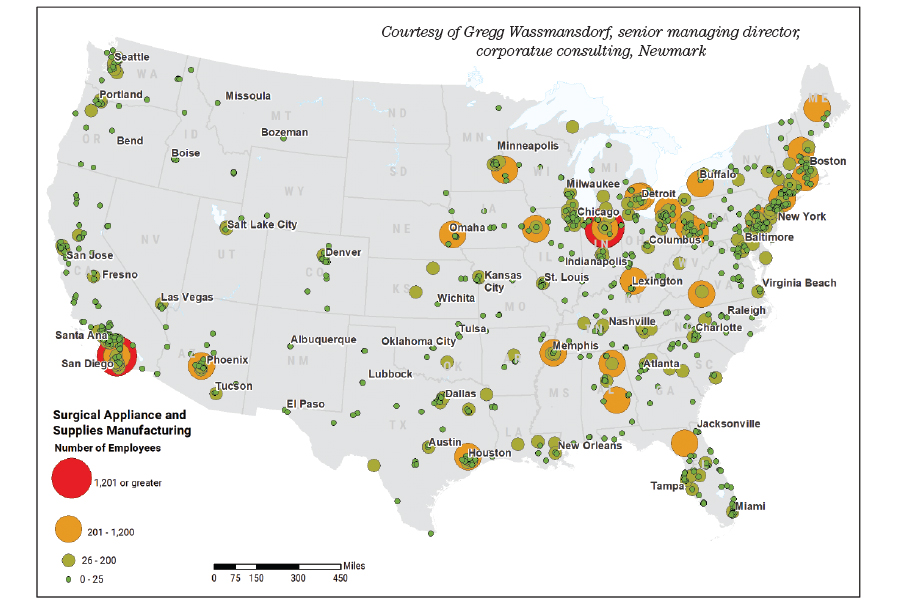 “In recent years,” said Wassmansdorf. “about 40 of 50 states have seen at least some growth in the medical devices sector,” he said.

As for workforce requirements, there are 60 different occupations that each employ more than 1,000 people in the industry. “Thirty jobs in the top 30 employment areas have more than 3,000 people working in that specific occupation,” he said, “from bioengineers, production planners and machinists to lab techs and shipping and receiving personnel.”

And like other areas of the medical industry, “Universities that support some aspect of pure research, applied research or successful commercialization will each influence these locations to a degree, as do large companies and distribution access,” Wassmansdorf said.

“When you look at certain sectors, like surgical appliances, they’re concentrated in L.A. for example,” he said. “But for dental applications, there is a completely different geography that includes Boston, Detroit, northern Ohio, Salt Lake City and Charlotte. Each subsector requires its own cluster analysis to understand it effectively.”

As for the COVID-19 impact on the industry, “It’s interesting,” said Wassmansdorf. “If you need PPE, ventilators and certain critical medical devices, there has been an enormous rise in demand, but that is only a narrow sector of the industry.” However, he added that the pandemic has also meant “that many elective surgeries are being postponed, thus demand for those devices is down.”

Also at play today is the evolution of technology, such as 3D additive printing and new material sciences, plus the digitization of health sciences and manufacturing. “Everything we think about as Industry 4.0, like robotics and automation, even the application and regulatory approval of artificial intelligence,” he said, “applies here in medical devices.”

As for the recent tension about what is offshored and what is manufactured domestically, Wassmansdorf said some production will return to the U.S., “but it’s not all coming back, and not everything needs to be brought back, either.”

“That trend is basically about de-risking supply chain and improving speed of delivery to customers,” he said. “Each company in every product segment will have to make its own evaluation of needs.” 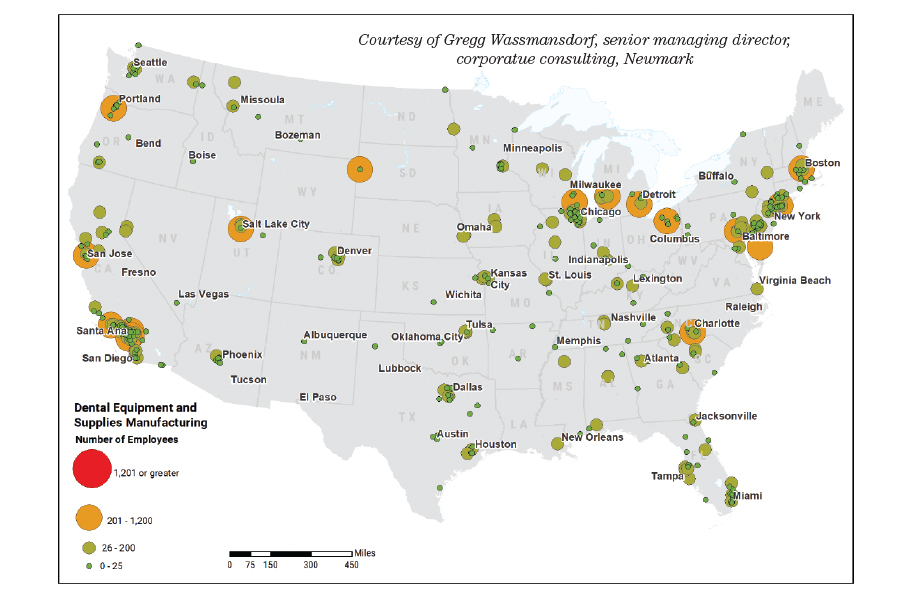 Brian Stemme, senior vice presidents of external engagement of Indianapolis-based BioCrossroads, a nonprofit that grows the life sciences sector in Indiana, also said the market has seen an increase in the production of items like medical technology and diagnostics equipment where a considerable amount of COVID-19 testing is being done, but less in the area of elective surgeries.

“After a decline through the summer, the medical device market came back to a degree with the lifting of bans on elective surgeries,” said Stemme, “and it should increase as we head towards the end of 2020 as individuals rush to finish procedures before year end. But we’ll see how the current spike in COVID-19 cases impacts elective surgeries.”

Still, Larry Gigerich, executive managing director for Indianapolis-based Ginovus, said the overall industry has been strong and should remain so in 2021, though he also acknowledged there were setbacks in the early days of the pandemic, some in that area.

“During that worst three-month stretch of COVID-19 when many elective surgeries were postponed many of those have since been conducted, but we’ll have to see if a new lockdown affects that trend,” said Gigerich, noting there still “was not a significant impact on device manufacturers” earlier in 2020.

Stemme said another trend BioCrossroads is seeing in the Midwest is the consolidation of the industry, with mergers and acquisitions (M&A) continuing between such companies as what is now Zimmer Biomet, as well as Covidien-Medtronic.

“We’ve also seen existing companies, such as Cook Medical, expand their facilities in the region while newcomer Abbott Cardiovascular is building a new facility near Indianapolis to manufacture a fast-growing heart valve. So, while companies continue to combine via mergers, they are also choosing to expand their manufacturing operations to enable organic growth,” said Stemme. “Both approaches will allow companies to offer a broader set of products to their customers.”

In the industry, companies focus on expanding product lines so that they can provide hospitals and other large customers a wide array of products. “As hospitals consolidate vendors and demand lower product pricing,” he said, “companies with a broader product mix are likely to remain as approved vendors and gain market share over smaller rivals that lose access to these large customers.”

As for the macro view moving forward, he sees the industry’s next movement in somewhat of a different light.

“It’s hard to make a broad statement about the health of the industry. In 2021, I think we’re going to see more consolidation, as many companies need to bulk up to address competitive and pricing pressures,” he said. “Secondly, we’ll see a continuing trend of the larger companies sourcing new products via the acquisition of early stage companies.

“It’s getting more expensive and more time consuming to get a medical device to market, as the regulatory authorities have raised the bar on the amount of data that companies need to obtain government approval,” he said. “Therefore, these younger companies are more open to M&A activity.”

In the end, developments concerning what steps to take in a highly technical industry can be reinterpreted into a very simple approach. “Why take another two years and have to raise another $50 million to bring a product to market,” Stemme said, “when you can sign a co-development agreement with an established partner or simply sell your company?” 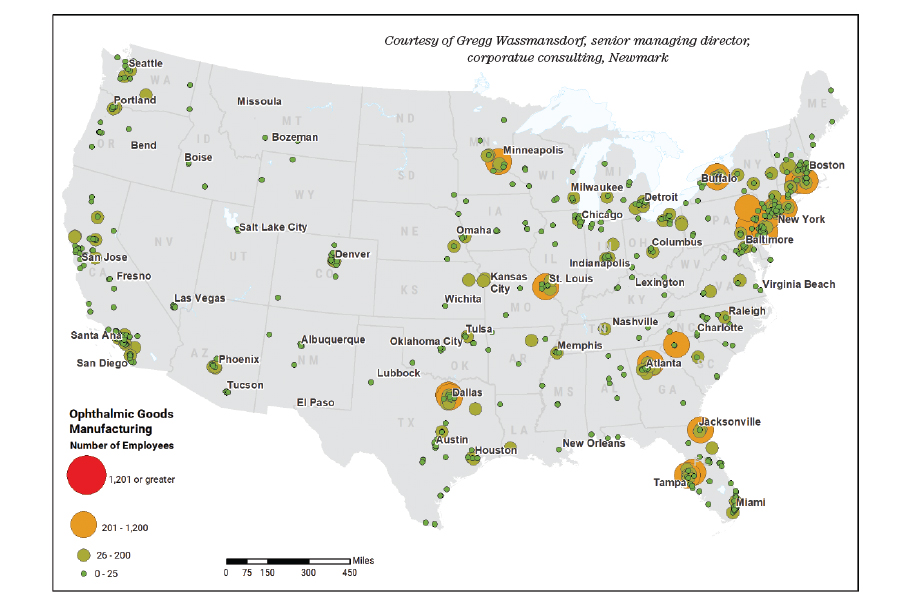 Though it’s not as broad of a sector of the medical device industry as many observers imagined, “much of the activity today centers around PPE,” Gigerich said.

“We’re seeing a great deal of development in certain sectors of the field that encompasses manufacturing testing kits, orthopedic devices, diagnostics,” etc., he said, “with great activity in the oncology space, with breakthroughs by Genentech and Ventana Medical Systems that can get results from a tissue sample in 48 hours to foster the start of a treatment plan.”

Another trend, Gigerich said, harkens to orthopedics. With a large sector of the world population living longer, “we’re seeing more knee and hip replacements. Despite all of the issues we’ve faced in 2021, the numbers will still look very good for orthopedics, combined with the normally expected growth.”

It’s such technological advances that continue to drive this space, he said.

“The innovation is truly amazing. Biopharma advances traditionally take longer to develop, but advancement is much faster in other areas, such as medical devices, medical diagnostic equipment and laboratory testing protocols,” Gigerich said. “Know that there are thousands of products that fit into the amazingly intricate supplier system that fuels this industry.” 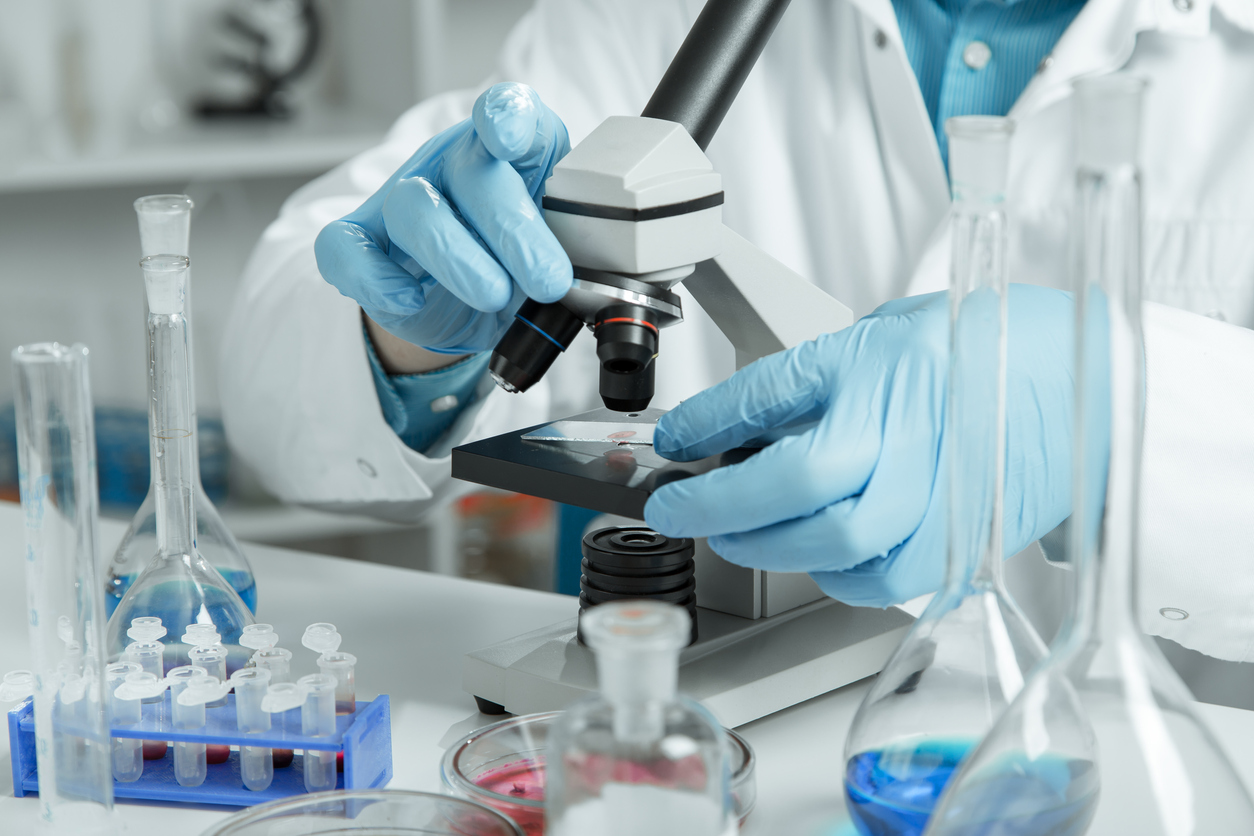 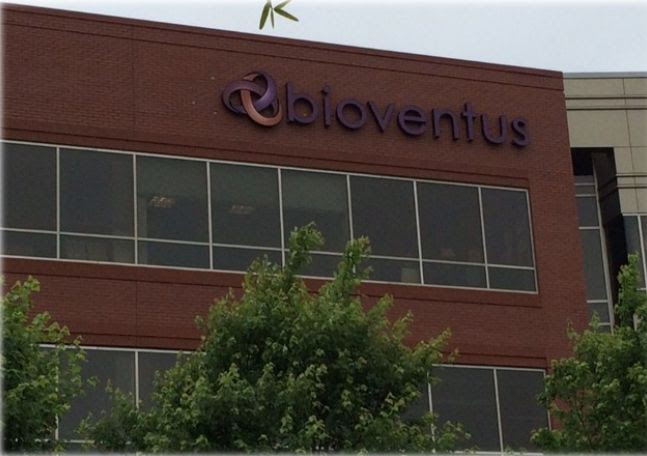 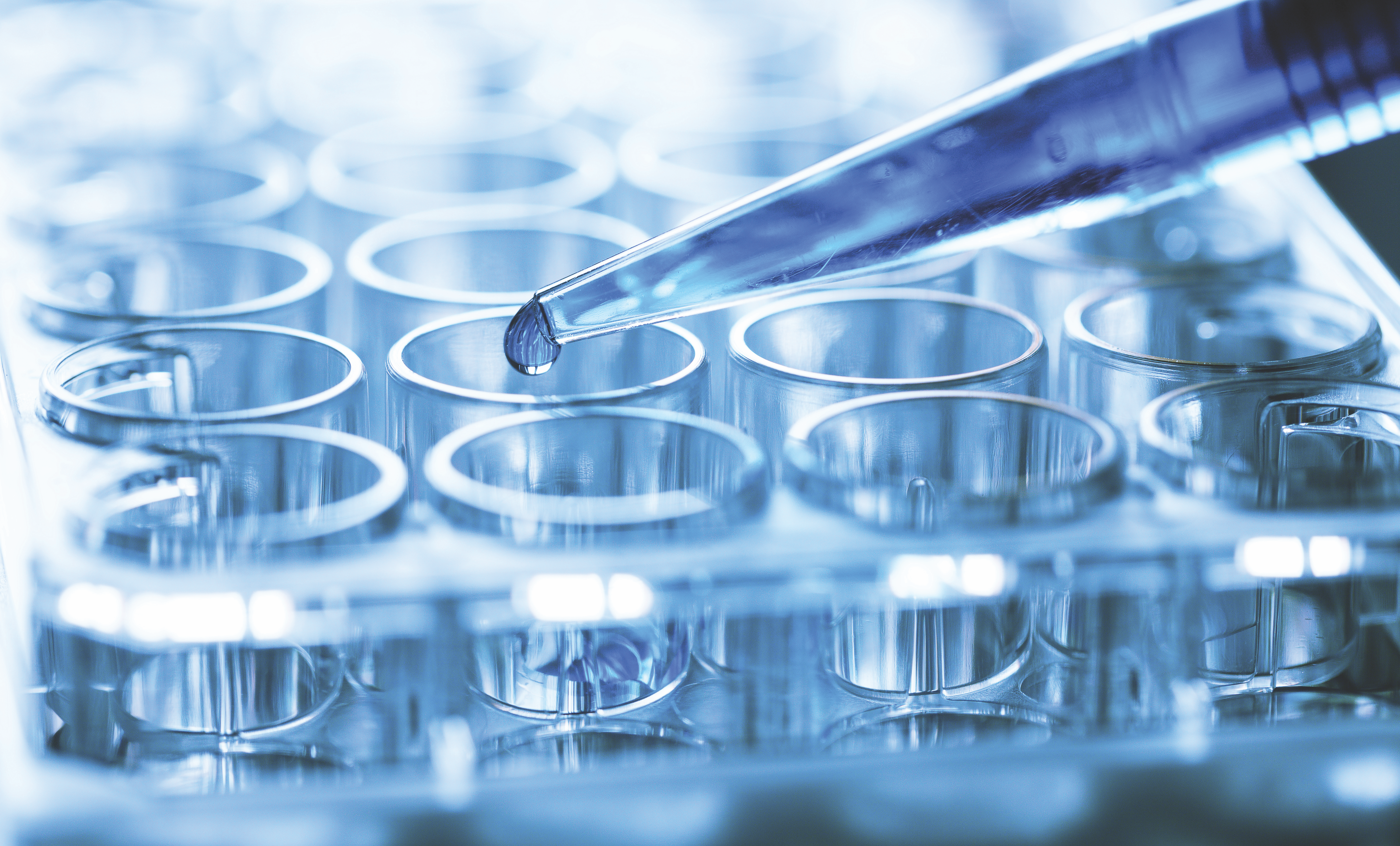 October 19, 2021
R&D Center is Expected to Accelerate Internal Discovery and Development of Vaccines and Antiviral Drugs Against COVID-19, its Variants and Other I...