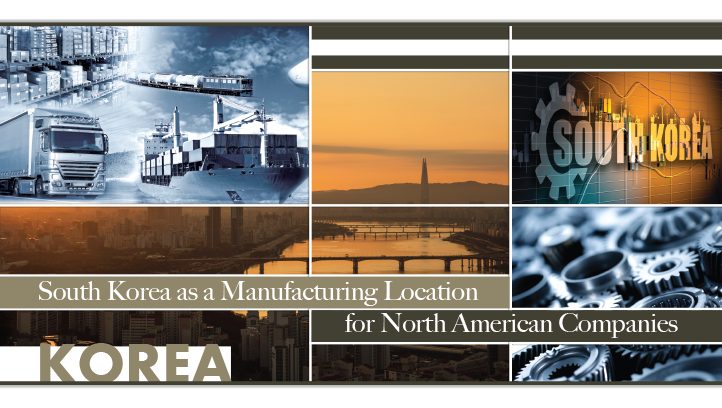 South Korea (the Republic of Korea) has developed from an agricultural society in the 1960s to a country with the world’s sixth-largest manufacturing sector. The country’s economy has been stabilizing at a GDP growth rate of about three percent per year. Wage costs are amongst the highest in Asia, second only to Japan, and at a similar level to the United States in sectors such as automotive. This article reports on trends and critical factors that North American companies might need to consider when searching for a new manufacturing operation in South Korea.

Petrochemical product exports have maintained an upward trend for six quarters in a row, which is in line with growing sales of specialty chemicals. Due to an aging society, a continuous and stable growth is expected in the life science sector where imports are currently dominated by the United States. South Korea’s semiconductor players are expected to heavily invest in their manufacturing capacities in South Korea and China. In addition to semiconductors, investments in display, optical electronics or IT device manufacturing may open substantial opportunities along the individual value chains. South Korea’s renewable energy capacities shall be quadrupled by 2030 within the framework of a government plan, mainly for solar and to a lesser extent for wind energy. Certain niche products in the food and beverage sector have experienced strong growth, such as sweets or instant meals, same as for imported food products such as cereal, dairy and meat, particularly. The machinery sector is characterized by higher import than export growth rates, accompanied by a decreasing capacity utilization.

Graph 1 depicts existing Free Trade Agreements of South Korea (red arrows) and the United States (blue arrows). Flags indicate countries that are not covered by the U.S. agreements, but rather by South Korea's agreement with the EU, EFTA, Turkey, China, India, New Zealand and the ASEAN states (although Singapore has an agreement in force with the U.S.). Canada already has an agreement in place with South Korea.

Example: A manufacturing investment of at least US $30 million is eligible for 100 percent exemption for five years in terms of national tax and tariffs (for imported capital goods), followed by two years of 50 percent national tax reduction. Acquisition tax may be fully exempted for up to 15 years, property tax may be reduced for up to 15 years. In case of a foreign-investment ratio of at least 30 percent, a minimum cash grant of five percent of FDI applies. Infrastructure construction cost may be reduced by 50 to 100 perccent. Other forms of support may apply as well, such as 50 to 100 percent lease fee exemption for foreign-invested companies.

Specialty chemical clusters are geographically correlated with the huge petrochemical hubs close to the major sea ports of Ulsan, Gwangyang and Pyeongtaek (at a greater distance in the latter case).

South Korea’s biotech complexes connect industries, universities, research and public institutions, with excellent infrastructure that includes several core research facilities of the government. These complexes are strategically located along an axis stretching from Daegu in the southeast to the northwest (i.e. south of Seoul.)

Saemangeum-Gunsan Free Economic Zone in the southwestern North Jeolla Province is targeting investments in the renewable energy sector, while a recent renewable energy development example is a 63 MWp onshore wind park complex that was erected in the South Jeolla Province. Players in this sector include a South Korean utility that just concluded a power supply contract for a large part of the capacity of a 100 MWp photovoltaic park in Texas, developed by a German company.

The national food R&D complex Foodopolis was set up in the North Jeolla Province adjacent to a science complex, benefiting from a network of several R&D institutes.

Possible investment concerns include a labor market under pressure due to frequent restructuring efforts mainly in traditional industries, the highest unemployment level since 2010 or an increasing youth unemployment. South Korea’s challenge in this regard is the development of digital and increasingly knowledge-intensive employment skills. A further strengthening of South Korea’s institutional framework is in progress. And in the renewable segment an increase of the County's energy supply is a top priority. The share of renewable energies in the primary energy supply is being pushed.

Assessing and identifying the optimum manufacturing location for North American companies in South Korea will require the integration of three major recommendations:

Location-driven approach. Locating in immediate proximity to existing sector clusters, or locating in KFEZs in case of a dedicated sector-fit or if financial incentives are mandatory for the success of the individual business case;

Customer-/trade-driven approach. Assessing the detailed cost impact of tariffs not applicable to those products that are manufactured in South Korea and exported to South Korea’s free trade partners in the Asia-Pacific region, as described in this article.

Even though the conclusions above may seem to be easily comprehensible, it is strongly recommended to consult location strategists to support the internal company decision-making process, especially when considering several countries in the Asia-Pacific region for a new manufacturing operation.

Inquiries may be directed to riedel@riedel-siteselection.com.