A Strong Pro-Business Climate
Texas is one of the country’s most dominant state economies thanks to its carefully constructed business environment, opportunities for employment and overall measured growth. Texas leaders in business and economic development maintain robust conditions for growth by increasing tax benefits for businesses, funding infrastructure improvements and facilitating overall growth.

Last year, the population of Texas grew by 367,000, more than any other state. Additionally, Texas added almost 1,000 jobs a day and set the record for the lowest unemployment rate in the state’s history since 1976. Texas leads the nation in job creation, and its leaders are committed to continuing this strong economic growth.

According to the Governor’s Office of Economic Development, “Texas prides itself on being a right-to-work state and will continue to make strategic investments to ensure it maintains our competitive advantage, allowing businesses to prosper and grow.” 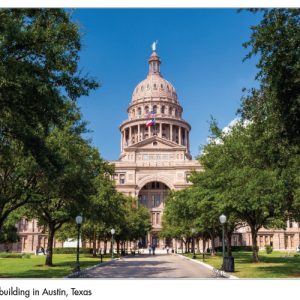 Governor’s Budget and Incentives
In 2019, Governor Greg Abbott outlined his plan for maintaining a business-friendly climate in his 2020-2021 Governor’s Budget. The extensive budgetary plan allots “the funds required to create, preserve, and expand the environment for a robust economy: low taxes; light, fair and efficient regulation; public safety; and a free and educated population and workforce.”

In order to accomplish this, Governor Abbott recommended adding $150 million to the Texas Enterprise Fund (TEF) for the next fiscal year. The TEF provides cash grants to businesses in order to develop expansion, relocation and investment projects and ultimately create job opportunities across the entire state. Another program, the Texas Enterprise Zone Program, uses state funds to encourage companies to make capital investments and create jobs in areas of Texas that are under economic distress.

Fueling Businesses with a Robust Talent Pipeline
In addition to business incentives, Texas provides support for educational incentives as well. The Economic Development & Diversification In-State Tuition for Employees Program grants in-state tuition rates at Texas’ public colleges and universities to employees (and their family members) of qualified companies relocating or expanding in Texas.

Another educational incentive program is The Governor’s University Research Initiative Grant Program (GURI), established by Governor Abbott in 2015. GURI’s goal is to improve the standings of public universities and colleges across Texas by recruiting internationally recognized researchers. These researchers in turn have contributed to furthering Texas’ economic development. Since the enactment of GURI, the Office of the Governor has approved $54,274,216.50 in matching funds to the University of Texas at Austin, Texas A&M University, University of Houston and Texas Tech University.

If Texas were its own nation, it would be considered the tenth largest economy in the world. Over 14 million people who work in the Lone Star State make up the second largest civilian labor force in the country, fueling businesses with a huge supply of skilled talent. Programs like GURI help educate this booming population of working talent within Texas, in addition to the 37 public universities and upper-division centers, which includes six state university systems and 50 community college districts.

History of Low Tax Legislation
In addition to the allotment of funds for investment and expansion projects, Texas has historically prioritized keeping taxes low for businesses. In light of increasing property taxes, Texas passed extensive tax reform legislation that provided $5 billion to alleviate much of these costs for businesses. In addition to property tax reform, Texas fought to ensure that there is no corporate or personal income tax. Because of this, The Tax Foundation ranked Texas in the top 10 states for lowest overall tax burden.

The Dallas-Fort Worth area is home to the headquarters of American Airlines and Southwest Airlines, two of the largest global airlines, along with Alliance Airport, which is the first solely industrial airport in the world. Additionally, the deep-water Port of Houston is one of the top ten ports in the nation and The Fort Worth Alliance Global Logistics Hub is one of the top global inland ports. 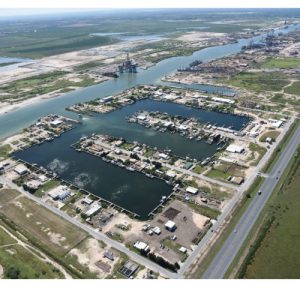 Top Exporting Power
Ports and logistical hubs connecting air, road and rail, like Alliance Global in Fort Worth, generate billions of dollars in economic activity for the state each year. Texas’ annual six percent export growth since 2002 is almost double the 3.6 percent rate for the rest of the country. Furthermore, over $330 billion worth of goods were exported from Texas in 2019 – an increase of more than 4.7 percent over 2018. Each Texas port plays a distinctive role in the state’s transportation network and contributes to economic activity at the local, state and international levels. 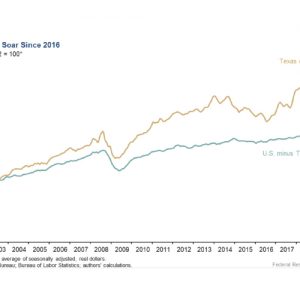 This graph from the Federal Reserve Bank of Dallas demonstrates the significant increase in Texas’ exports since 2016.

Industries:
Aerospace & Defense
Texas is home to a wide variety of industries that employ millions of the state’s residents. The aerospace, aviation and defense industry alone directly employs over 130,000 Texans. The state’s infrastructure, including some of the busiest commercial and industrial airports in the world, has contributed to Texas becoming an incredibly important location for the global aerospace and aviation industry. NASA’s world-famous Johnson Space Center in Houston and the 15 active military bases in Texas also strengthen the diverse industry landscape and attract many of the largest aviation companies.

Given its proximity to Mexico and its shared border, Texas has become an important part of the realigned North American “auto alley,” running north from Mexico through many southern U.S. states. Texas serves as a key link between Mexico’s auto plants and the U.S. auto industry.

Texas is home to 1,752 automaker facilities and ranks seventh in the U.S. for automotive manufacturing employment. In addition, Texas automotive exports have more than doubled from $9.2 billion in 2009 to over $18.5 billion in 2016.

In September 2019, Toyota Motors and Aisin AW announced a combined investment of almost $800 million in Texas, with Toyota investing $391 million at its San Antonio truck assembly plant and Aisin AW investing $400 million toward a future facility that will bring 900 jobs to Cibolo. The total economic impact of these combined investments will surpass $10 billion with an employment multiplier of 40,000 jobs over the next 10 years, according to the San Antonio Economic Development Foundation.

Wind Energy
The Lone Star State’s renewable energy potential is among the largest in the nation, with abundant wind, solar, and biomass resources found across the state’s geographically diverse regions. Specifically, Texas leads the nation in wind power generation, contributing to more than one-fourth of the U.S. total in 2018.

Texas is the nation’s top wind energy producer with a capacity of 17,700 MW – more than double the installed wind power capacity of any other state. If Texas were a nation, it would rank sixth for installed wind capacity behind only China, the rest of the U.S., Germany, India, and Spain. In 2018, direct wind industry jobs in Texas totaled over 25,000, and Texas ranked second in the nation for installed solar capacity.

Trends in Texas indicate that the state is moving away from power generated by natural gas and turning to alternative forms of energy like solar and wind. Therefore, wind developers in Texas are expected to add 30 gigawatts of power, or 27 percent of total new capacity, in the next three years.

A Year in Review: Texas’ Top Investments in 2019

Bio: Robert Allen is the President & CEO of the Texas Economic Development Corporation (TxEDC), an independently funded and operated 501(c)(3) nonprofit organization responsible for marketing and promoting Texas as a premier business location. Prior to his role at TxEDC, Allen served as the Deputy Chief of Staff to Governor Greg Abbott, working to position Texas as a global leader in economic development. 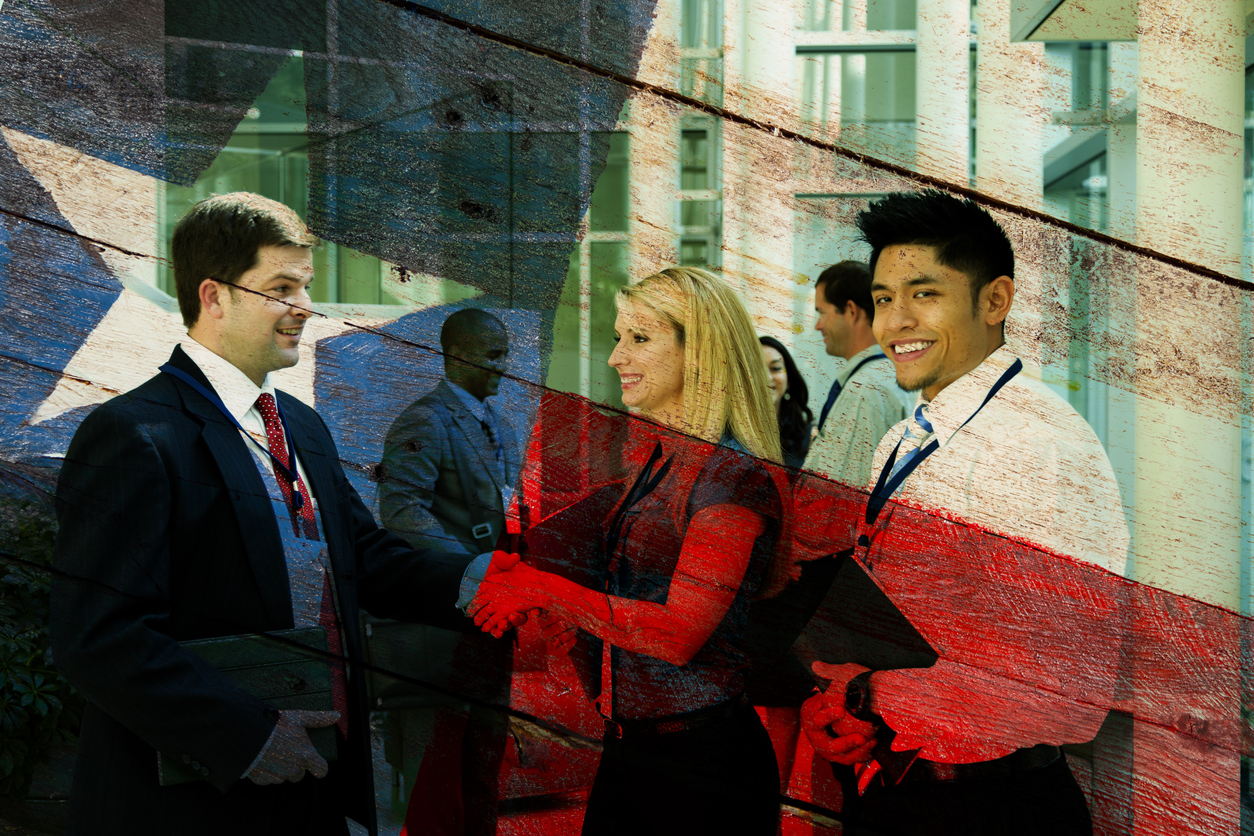