Utah has long been a destination for companies looking for a new home and the events of 2020 have not changed that. Despite the economic impacts of COVID-19, Utah continues to be among the best states for business, with an affordable cost of living, an exceptional higher education system and world-class recreation opportunities. Utah’s demographics, geography, and intentionality in how its state and local governments, business sector, and universities work together to ensure economic stability makes Utah a port in the storm.

When it comes to the state’s demographics, Utah’s population is the youngest in the nation, with a median age of 31 years. The state is also among the fastest growing; in 2019, net in-migration contributed to 47 percent of the state’s growth. What does this mean for companies? Access to a healthy, young, and increasingly diverse workforce.

Utah’s workforce is highly-educated and multi-lingual. Some 33 percent of the state’s population holds a bachelor’s degree or higher and more than 120 languages are spoken on college campuses across the state. Three quarters of the state’s population lives along the Wasatch Front – an area running 100 miles along the Wasatch Mountains. This region is the state’s primary business hub and includes the capital city and the ever-growing Silicon Slopes tech sector. Furthermore, the communities located elsewhere in Utah have opportunities for those looking to move into the state.

Utah’s central location in the Rocky Mountains has long meant the state is a hub for business. Ever since 1869, when the transcontinental railroad met in Promontory, Utah, the state has been known as the ‘Crossroads of the West’. Utah still has a love affair with rail – the first point at which rail lines from Southern California, the Bay Area, and the Pacific Northwest converge is in Salt Lake City.

The state continues to connect the east and west coasts with major highways. The new Salt Lake City International Airport (a $4.2 billion project) opened to the public in September 2020 has direct flights to six international cities and to the nineteen busiest domestic airports. Utah’s transportation hub centered in Salt Lake City means it is perfectly positioned for corporate headquarters, regional operations or distribution centers.

The infrastructure is not limited to above ground. Did you know Utah is home to the fourth node of the original internet? Utah boasts high concentrations of fiber optic broadband capacity. UTOPIA Fiber, for example, is the largest and fastest open-access fiber network in the country, serving 100,000 homes and businesses. Residents in the rural city of Morgan, Utah, have faster broadband connectivity than executives living in California’s Silicon Valley.

Utah’s intentionality starts with state government. Utah has one of the most favorable tax climates in the nation and has competitive utility and real estate costs due to a business-friendly, regulatory environment. The state has eliminated or modified nearly 400 business regulations since 2011, to reduce burdens on business.

Decades ago, Utah identified key industries to nurture in which the state has a competitive edge. The Governor’s Office of Economic Development (GOED) put resources into the effort. Today Utah has one of the most diverse economies in the country, which provides stability in times of economic headwinds.

Speaking of economic headwinds, 2020 has been a turbulent year for businesses and state economies alike. Utah’s strong economy prior to the start of the pandemic has meant that the state is recovering at a faster pace than others.

What’s new in Utah? Among the many exciting things happening in the economic development ecosystem in the state is the recently formed Rural Workforce Network. The network is a partnership between the Economic Development Corporation of Utah (EDCUtah), the Salt Lake Chamber, and the Utah Department of Workforce Services. The program’s goal is to match growing companies on the Wasatch Front with potential employees in the rural parts of the state. If 2020 has proven anything it’s that “remote work works” and Utah has the programs in place to make sure it stays that way.

One of Utah’s burgeoning industries is data centers. Home to a Facebook data center as well as companies such as Databank, FiberNet, and Syptec, the state is seeing an increased interest in building data centers here. Utah offers competitive power rates, low operation costs, and a growing renewable energy system that offers a competitive edge when it comes to sustainable practices.

Utah’s high desert climate makes the state an attractive location. The low humidity, cold winters, and cool summer nights means the need for climate control equipment is less than other areas of the country. Additionally, despite the fact that Utah is a desert and has limited water, a number of Utah’s current data centers are finding innovative ways to minimize the amount of water needed to keep the servers cool. Further
the state has little risk of natural disasters such as hurricanes, tornadoes, and dust storms that are common in other parts of the United States. While Utah does experience the occasional earthquake, there are areas of the state less prone, and building techniques to mitigate the risk.

Also exciting are the recent changes to Utah’s tax code when it comes to data centers. During the 2020 general session, the Utah Legislature passed Senate Bill 114 which modified the sales and tax use for certain data centers. The changes now mean that data centers of 150,000 square feet or more can qualify for sales tax exemptions. This is good news for co-location and enterprise sites, and puts Utah on a level playing field with other states. 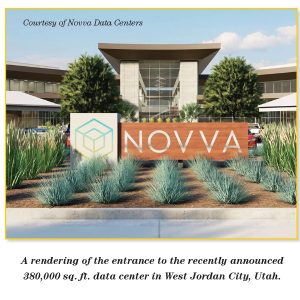 Now, not only are servers exempt, but other machinery, equipment, and normal operation and maintenance and repair (MRO) parts are exempt from sales tax. Additionally, data center tenants can qualify for the same exemptions as the data center operators.

This is just one of the many examples of how Utah’s government remains business friendly and is adapting its laws and tax codes to reflect the reality of emerging business trends. With an increasing number of companies moving to a co-location model, these tax exemptions allow Utah to remain competitive in the ever-evolving business world.

Utah has and continues to be an American economic powerhouse. With a diverse, stable, and growing economy, the state has much to offer to current and prospective residents. Home to the Mighty Five™ national parks and the “Greatest Snow on Earth®” there’s something for everyone to enjoy. As a state, Utah is young, cost-effective, and well-connected – perfect for businesses to call home.

Bio: Elizabeth Johnson is the marketing and events manager for the Economic Development Corporation of Utah (EDCUtah), a state-wide organization dedicated to attracting and growing competitive, high-value companies and spurring the expansion of local Utah businesses. In her role, she is responsible for working with stakeholders to promote the state of Utah and the mission of EDCUtah. She holds a Bachelor of Arts in marketing from Westminster College in Salt Lake City and is proud to be a member of Team Utah.

January 7, 2020
By Elizabeth Johnson, EDCUtah Utah has long been a destination for companies looking for a new home, and that’s with good reason. The state ranks am...

March 22, 2018
​​​​​​​Utah found itself in the spotlight over the past year due to its bids for large corporate projects. While some bids have indeed b...

Utah: Manufacturing on the Rise

January 12, 2017
Time for a history lesson: the longest, continuously operating company in Utah is Logan-based Central Milling, which has produced high-quality flour f...