By John Rees and Chris Engle of Avalanche Consulting

The labor market is tighter than it has been in years. Unemployment is less than five percent. The difficulty of securing talent is a growing concern for companies and communities alike. In a recent survey by Avalanche Consulting, nearly 90 percent of economic developers reported that finding a skilled workforce has become ever-more important to expanding firms during the past year. No company can afford to invest millions of dollars in a new or expanded facility only to find its operations hampered by a lack of available labor.

In an economy that increasingly rewards firms that can most effectively acquire and manage human capital, how can companies looking to expand or relocate their operations identify communities rich in talent? What actions can employers take to ensure they have access to a sustained pipeline of trained workers? What resources are available to make workforce training more cost-effective? How do companies increase awareness of opportunities available within their industry?

Choose the Best Location to Find the Talent You Need
The availability of skilled workers is far tighter today than for unskilled workers. In April, the unemployment rate for individuals with a college degree dropped to 2.4 percent. The last time the unemployment for college-educated workers fell below 2.5 percent, George W. Bush was president, Bill Gates was still leading Microsoft, and Apple’s App store didn’t exist. Given the increasing scarcity of available talent nationwide, how can expanding or relocating companies select locations that will provide them with the workforce necessary to thrive in a global economy?

Companies hoping to identify markets flush with skilled workers would do well to begin their search with a look at where talent is produced year in and year out. In 2014, metropolitan areas with at least 500,000 residents awarded a total of two million bachelor’s, professional, and graduate degrees. The three largest metros—New York, Los Angeles, and Chicago—accounted for more than 20 percent of all degrees  produced. Many smaller communities, however, offer far higher concentrations of talent production. On a per capita basis, regions such as Durham, North Carolina and Provo, Utah award more than twice the number of degrees as the largest metros.

Corporate site selection decisions should also take into account a region’s ability to attract talent. In some communities, the annual influx of college-educated migrants rivals the number of locally awarded college degrees. Post-secondary institutions in Houston, for example, awarded slightly more than 25,000 college degrees in 2014. That same year, the region attracted nearly 22,000 new residents with a bachelor’s or graduate degree. As many of these individuals are mid-career professionals, they may be even more desirable than recent college graduates. Other leading destinations for educated workers include Dallas, Phoenix, and Denver.

Companies concerned with meeting their immediate and long-term workforce needs should also consider the overall “churn” of talent. Net migration numbers often obscure far larger talent migration trends. In 2014, for example, on a net basis Atlanta gained just 5,000 new residents with a bachelor’s degree from other parts of the U.S. This figure misses the fact that Atlanta saw the departure of 89,000 college-educated residents while simultaneously welcoming 94,000 highly-skilled workers. Similar dynamics characterize high-growth regions such as Austin, Seattle, San Francisco, and Charleston. While the turnover of talent may not intuitively appear to be a competitive advantage, high churn regions offer companies a continuous supply of new ideas from both recent and returning residents.

Cultivate Your Talent Garden
Simply selecting a community with an abundance of talent may be insufficient to ensure a company’s long-term labor needs are met. As any farmer knows, no matter how rich the soil, ensuring a bountiful harvest requires continuous cultivation. Similarly, companies looking to secure a skilled workforce over the long term must regularly communicate their needs to local colleges and universities.

Chambers of Commerce, the voice of local business, provide an ideal forum for communicating labor needs to local educational institutions. Some chambers take this job seriously. In Charleston, South Carolina, for example, the local Chamber of Commerce created a “Talent Demand Analysis” that combined local input from major employers with forecast data to identify workforce gaps that need to be filled by colleges. Companies with large or unique labor needs should also provide annual input to post-secondary institutions that often find themselves in the dark about the local demand for labor. By bringing together multiple employers, chambers of commerce can help align  educational programming in a region with employer-driven demand for labor.

Houston’s energy sector provides a striking example of how private companies can help address potential workforce shortages. During the past decade, the Houston metro has added approximately 575,000 jobs. To put this figure in perspective, Houston’s job growth during this period exceeded the combined net employment gains of every state west of the Mississippi except New York. Voracious job creation within Houston created an insatiable demand for labor. Even with the current slowdown in the energy sector, the growing number of workers approaching retirement is likely to fuel future labor challenges.

In an effort to identify future workforce shortages, local business associations in Houston are conducting private inventories of labor demand. In Houston, for example, the East Harris County Manufacturer’s Association conducted an extensive survey of the future hiring plans of member companies and likely employee turnover by occupation. To ensure confidentiality, all research was performed by an outside third-party. By closely analyzing its labor force, members were able to determine what occupations were likely to be needed most as a result of both growth and turnover. The results provided a nuanced understanding of the entire labor ecosystem, not just the singular employment dynamics of an individual firm. The survey results also helped a local community college secure grant funding for a new workforce development training center, underscoring another tool available to companies looking to improve their workforce.

Follow the Training Money
According to the Georgetown Center on Education and the Workforce, the federal government spends an estimated $18 billion each year on job training programs. While such funding can help companies reduce training expenses, navigating the maze of available workforce training grants can be a daunting task. An analysis by the Government Accountability Office identified nearly 50 employment and training programs administered across nine agencies. Further complicating matters, individual training programs often overlap with one another but feature significant differences in eligibility. Fortunately, a host of state and local resources exist to assist companies with their workforce development needs.

Companies looking to take advantage of government programs should contact their local workforce development agency. Local economic development officials can often put you in touch with individuals capable of breaking through federal bureaucratic hurdles as well as state officials that might have their own separate workforce development programs. A number of states, for example, provide free workforce training programs to companies expanding or relocating their operations.

Georgia’s Quick Start program, one of the oldest and most respected workforce training initiatives in the U.S., provides customized workforce training at no cost to qualified businesses. The program has been critical in attracting investments from companies such as Kia Motors and Caterpillar. For Kia, Quick Start facilitated an application process to help the company identify prospective workers. Within a month, Quick Start representatives prescreened 43,000 candidates, interviewed 10,000 individuals, and selected 1,200 workers.

Georgia’s success hasn’t gone unnoticed by neighboring states. South Carolina, Alabama, and Louisiana have all adopted similar programs to help companies with their workforce development efforts. Even when someone else is footing the bill for workforce training, however, companies may still struggle to get prospective employers into classrooms.

Manufacturers: Tell Your Story
The growing manufacturing industry is especially affected by a lack of available workforce. In many ways, manufacturing is suffering a branding crisis among younger workers. According to a study by the Manufacturing Institute, Generation Y respondents ranked manufacturing dead last among seven industries as a possible career choice. Retail ranked 4th. Given the anticipated labor needs of U.S. manufacturers in the years ahead, it is critical that the industry improve its image among prospective workers, especially younger ones.

In the minds of many Millennials, Manufacturing is a dirty and declining industry that primarily involves low-skill and low-wage work. Such beliefs are often based on outdated notions of the industry. Manufacturing employment has increased for five consecutive years. The complexity of modern manufacturing equipment requires a skilled workforce. High demand for these workers often leads to relatively high wages; the average manufacturing worker in the U.S. makes $2 for every $1 earned by a retail employee.

In recent years, many manufacturing companies have made efforts to increase enthusiasm about manufacturing career opportunities among young adults. Such interventions, however, are often insufficient to reverse negative perceptions about the industry that have been promoted by parents and teachers alike. Plant managers will be the first to tell you that by the time students reach high school or college, it’s too late to interest them in manufacturing jobs. As a result, some companies are undertaking outreach initiatives aimed at even younger populations.

Consider creating a “manufacturing camp” like the one in Jonesboro, Arkansas, which has a rich tradition of manufacturing. Local manufacturers face competition for new workers from other industries such as food service and retail. The problem isn’t money; the average manufacturing worker in Jonesboro earns three times as much as the average Leisure and Hospitality worker. Realizing that education is key to improving their ability to attract talent, local manufacturers launched a manufacturing camp to expose children to opportunities within the industry. Each summer, participants spend a week working with local manufactures to design and build small projects. While it’s too soon to tell if the initiative will facilitate the emergence of an up-and-coming manufacturing workforce, the initiative represents a creative marketing approach for an industry that has too often let others define it.

Conclusion
In today’s war for talent, companies must adopt a multifaceted approach to the development of a skilled and sustained talent pipeline. By understanding the geography of talent, communicating labor needs to local educational institutions, leveraging federal workforce training dollars, and marketing opportunities within their industries, companies can ensure that their human capital remains a primary competitive advantage.

John Rees is Avalanche’s Research Director, where he is responsible for transforming raw data into meaningful insights about a region’s economy and people. John specializes in exploring data to discover the truth about client communities. At Avalanche, John has developed sophisticated analyses for public, private, and philanthropic organizations, including the Greater Houston Partnership, Indiana Michigan Power, and the Miami Foundation. 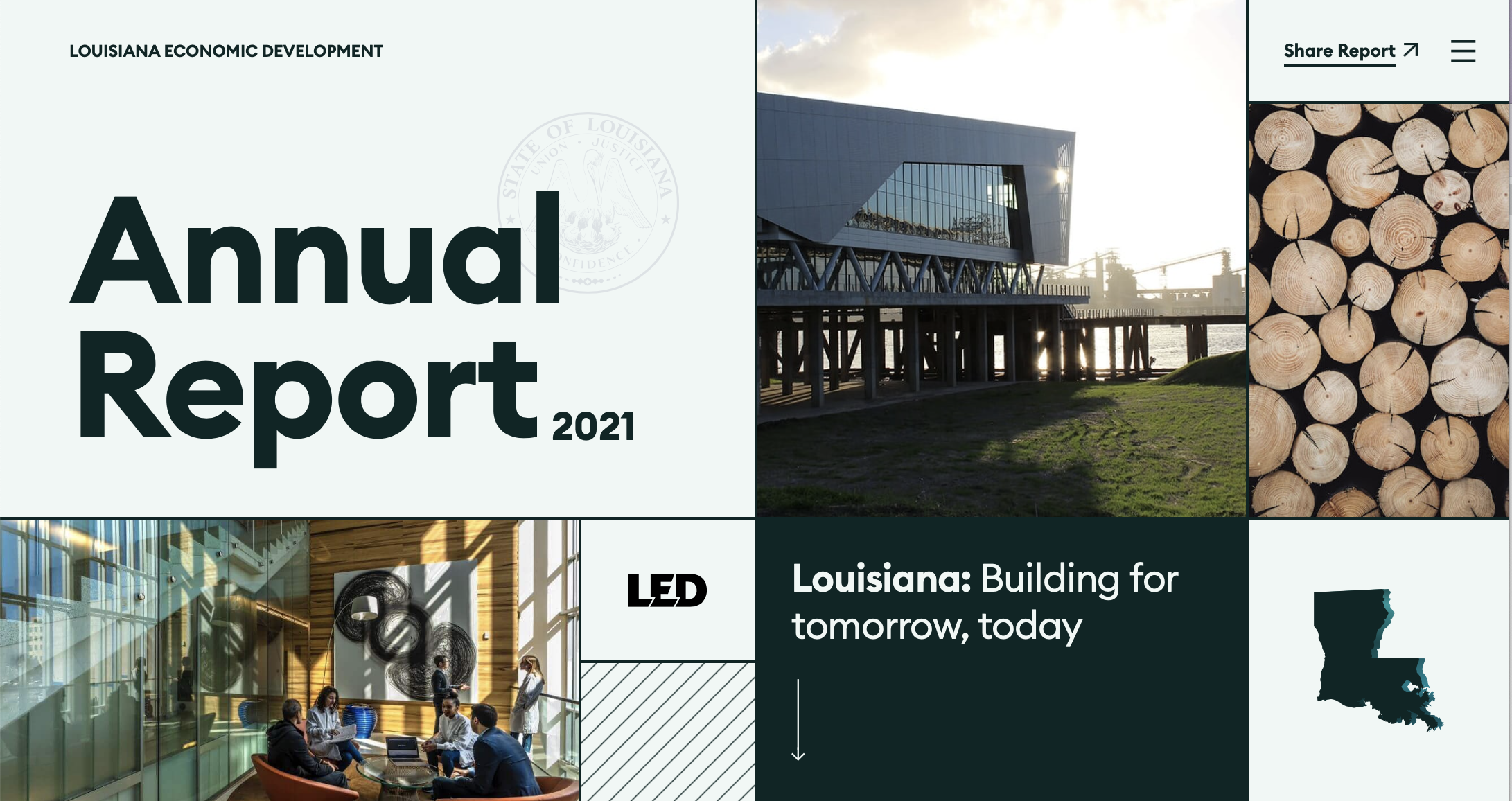 April 12, 2022
Louisiana has launched a new website that provides an interactive record of a landmark year for economic development across the state: $20.5 billion i... 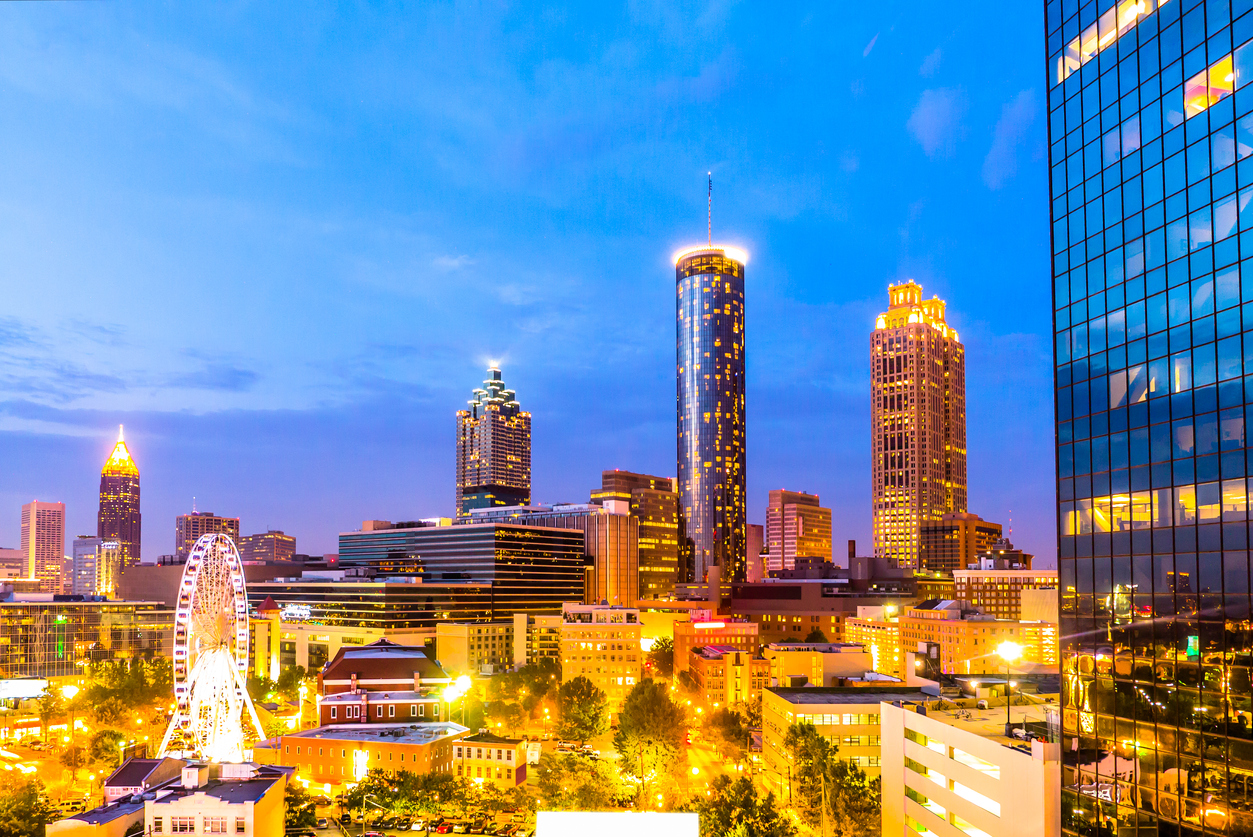 April 7, 2022
Atlanta, GA – Governor Brian P. Kemp, in conjunction with the Georgia Department of Economic Development (GDEcD), today announced that through the t... 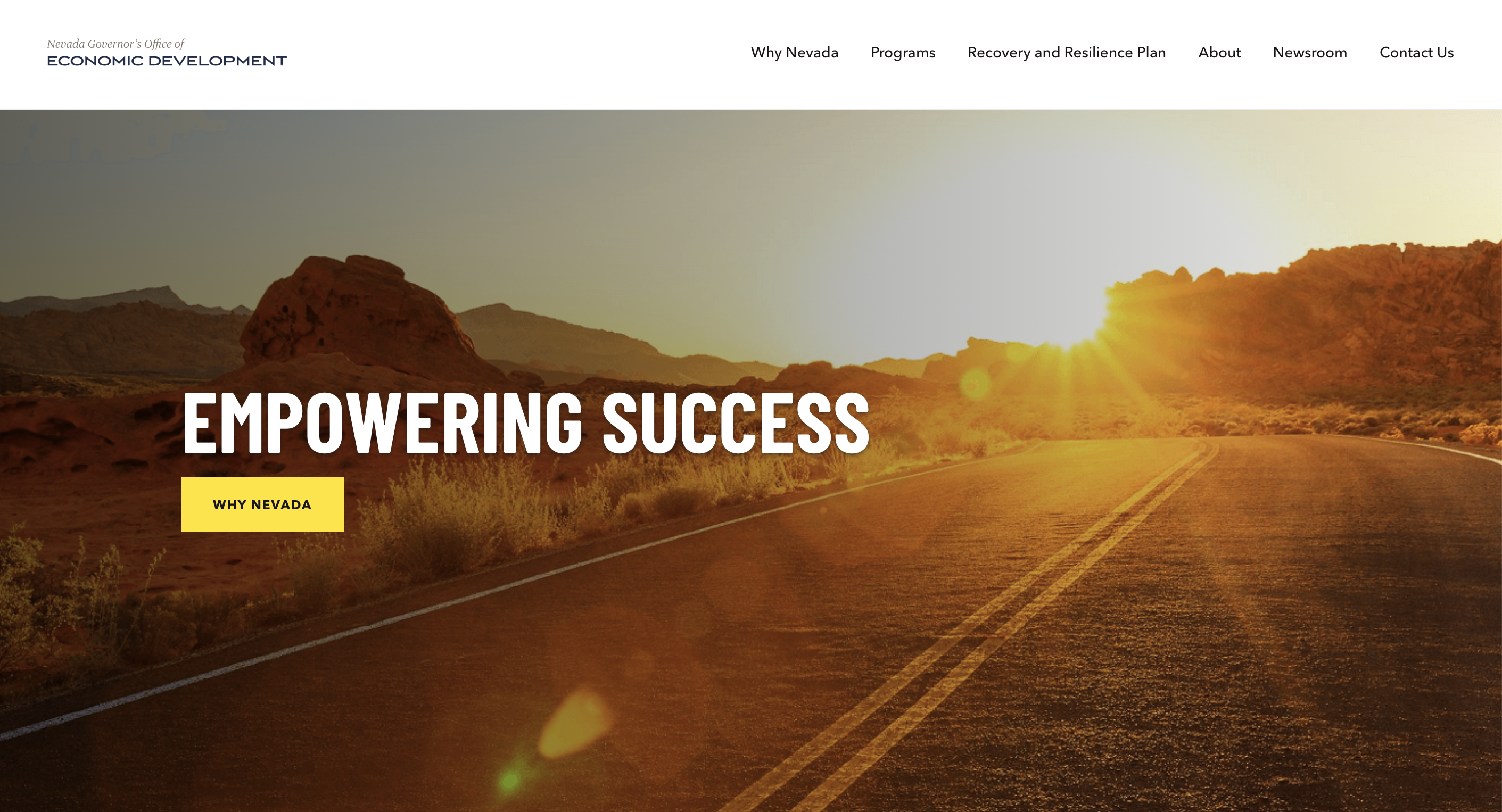 Nevada’s GOED Website Ranked No. 1 in Nation in Transparency

April 5, 2022
Nevada’s Governor’s Office of Economic Development (GOED) website has been ranked as the most transparent of all state economic development websi...